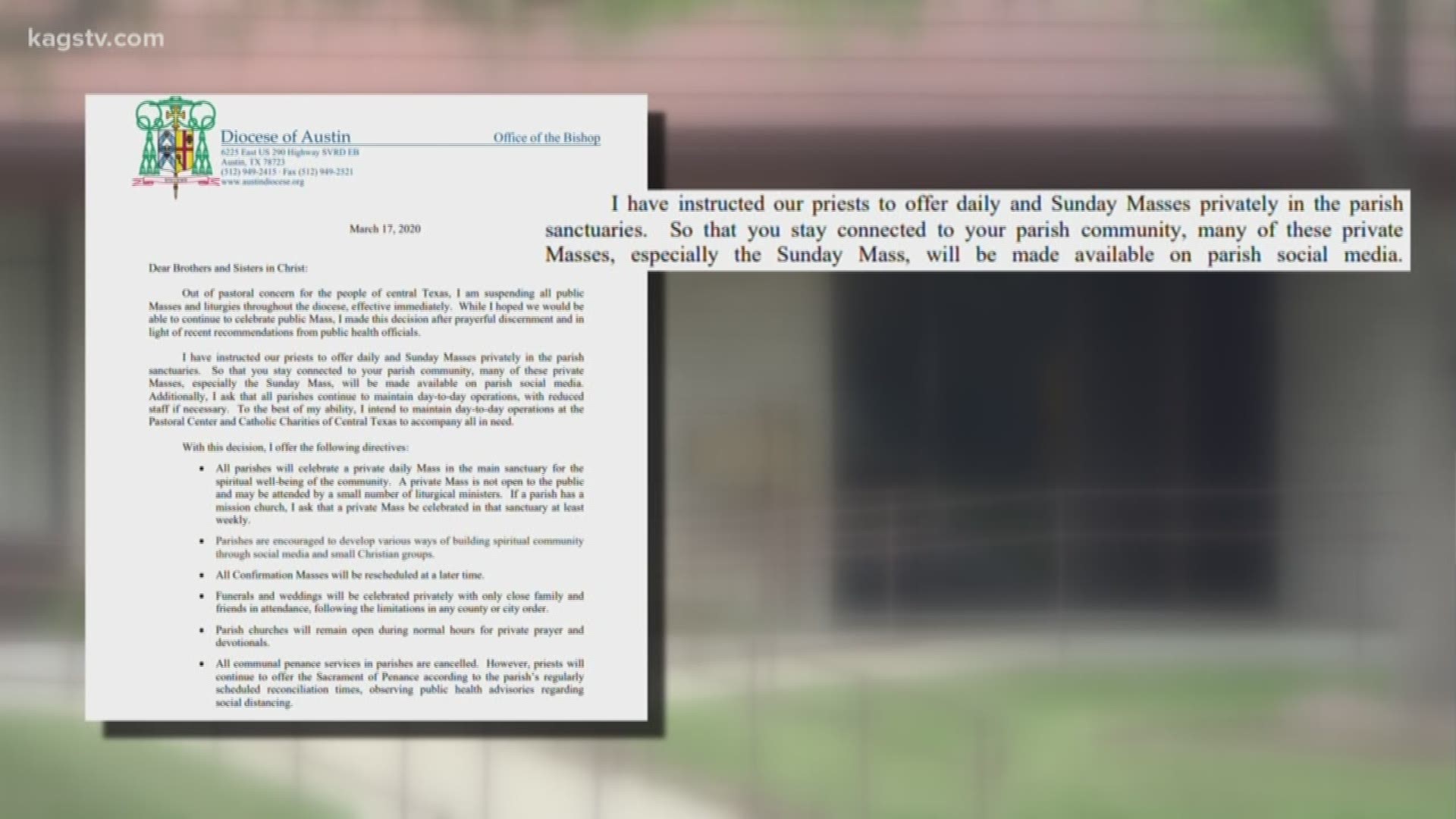 But how is that being handled in the Brazos Valley, and what can practicing Catholics do with this change in routine?

“You have to understand the necessity for this tough rules. Its absolutely necessary for greater harm,” said Tom Cahill, the Director of Adult Initiation for St. Joseph's Catholic Church in Austin.

Among other directives, the decree given by the Catholic Diocese of Austin states says masses will be held privately and streamed on social media, confirmations will be rescheduled for later and funerals and weddings will be celebrated with only close friends and family. Until further notice, Easter Sunday will go as planned.

For now, “the way they’re going to handle masses is this, the priest will say a mass at a regular time, but the public will not be allowed to attend it. And you can watch it on some sort of social media. Because its all you can do if you’re going to maintain your social distance,” Cahill said.

For many Catholics though, taking the Eucharist is an important part of their lives, but for the time being, taking bread and wine is not an option.

“This falls into a category of thinking with respect to other human beings. Young people if they get the disease, they are not going to die, but if somebody over 70 gets the disease, they will very likely be in serious trouble. They should care because they owe a duty in a community to people that are older than they are,” he said, “in catholic theology, there’s a thing called spiritual communion. It’s a beautiful prayer, that says ‘Lord I cannot go to communion right now, but I would like to receive you into my soul and into my heart. It’s a simple concept, you can have a spiritual communion without having it physically into you, and they’re equally valid.”

In times of uncertainty or confusion, people do often turn to faith but, the church says the responsible thing to do is worship carefully.

“These are just common sense steps that they’re taking. You’ve got to trade off the lesser of two evils. It may be evil for you to miss communion. But it’s a great deal more evil for you to cause a person to die.”

The directive for masses lasts until April 8, 2020.

Diocese of Austin
Members of the Ascend Class of 2020, the Diocese of Austin's young a... dult leadership program, showed that social distancing doesn't have to mean a lack of connection when they opted to meet digitally yesterday for their weekly class! Please pray for these young adult leaders as they continue to be formed personally, professionally and spiritually.