While he was performing an aerial straps number, long-time aerialist Yann Arnaud fell onto the stage, a Cirque Du Soleil representative said in a statement. 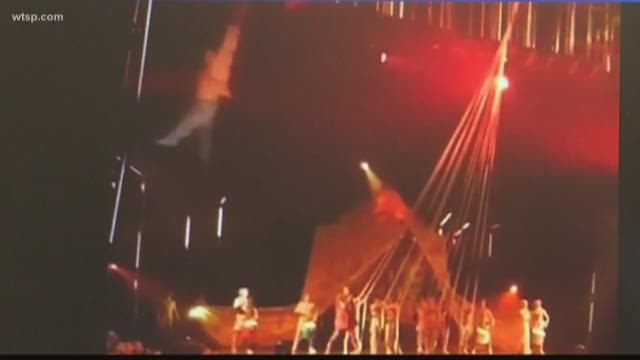 While he was performing an aerial straps number, long-time aerialist Yann Arnaud fell onto the stage, a Cirque Du Soleil representative said in a statement. He was taken to Tampa General Hospital, where he died from his injuries, spokeswoman Ellen Fiss said.

"The entire Cirque du Soleil family is in shock and devastated by this tragedy," reads the statement by Daniel Lamarre, President and CEO of Cirque du Soleil Entertainment Group, in part. "Yann had been with us for over 15 years and was loved by all who had the chance to know him.

"Over the coming days and weeks, our focus will be on supporting Yann’s family and our employees, especially the VOLTA team, as we go through these difficult times together."

Guests being handed this as they show up for today's @Cirque #VOLTA show in Tampa. All shows cancelled. pic.twitter.com/WZOGhOwpqP

Cirque du Soleil's touring "Volta" show has been in production since mid-February at Tampa's Under the Big Top, located by the Tampa Greyhound Track on Nebraska Avenue. There were two remaining shows scheduled for 1:30 and 5 p.m. Sunday, March 18, but they have been canceled, according to a statement.

People who purchased tickets will be notified.

Tampa police will be investigating the incident, and the federal Occupational Safety and Health Administration is expected to do their own investigation.

Dade City, Florida, resident John Nugent was in attendance at the show with his fiancé, sitting toward the side where Arnaud fell.

"(I) didn't expect for that to happen and when it happened, (we) were both in a state of shock," Nugent told 10News in a Facebook message. "We couldn't believe that we watched him fall right in front of us."

The company in charge of publicizing the Tampa show issued the following statement earlier Sunday:

"Yesterday night, March 17th, one of the aerial straps artists of VOLTA by Cirque du Soleil fell during his performance on stage in Tampa," according to spokesman Jose Boza. "The artist was immediately carried out of stage to receive assistance. In order for the VOLTA team to focus on the health of the artist, the rest of the show was cancelled. [sic]

"The performances that were planned today have also been cancelled. We will stay in contact with the members of the audience who had purchased tickets for the show."

The acrobat's death is the second performer fatality in Cirque du Soleil's history. According to the BBC, Sarah Guillot-Guyard, 31, died during a 2013 show in Las Vegas when she fell 94 feet to the floor when a safety wire detached.

Olivier Rochette, a 43-year-old technician and son of one of the company's founders, died in 2016 while setting up for a performance.