Motion for "Change of Venue" filed in Dabrett Black case

More than a year after Dabrett Black was arrested and charged with the death of DPS Trooper Damon Allen, his attorneys filed a motion for a change of venue with the Freestone County Court. 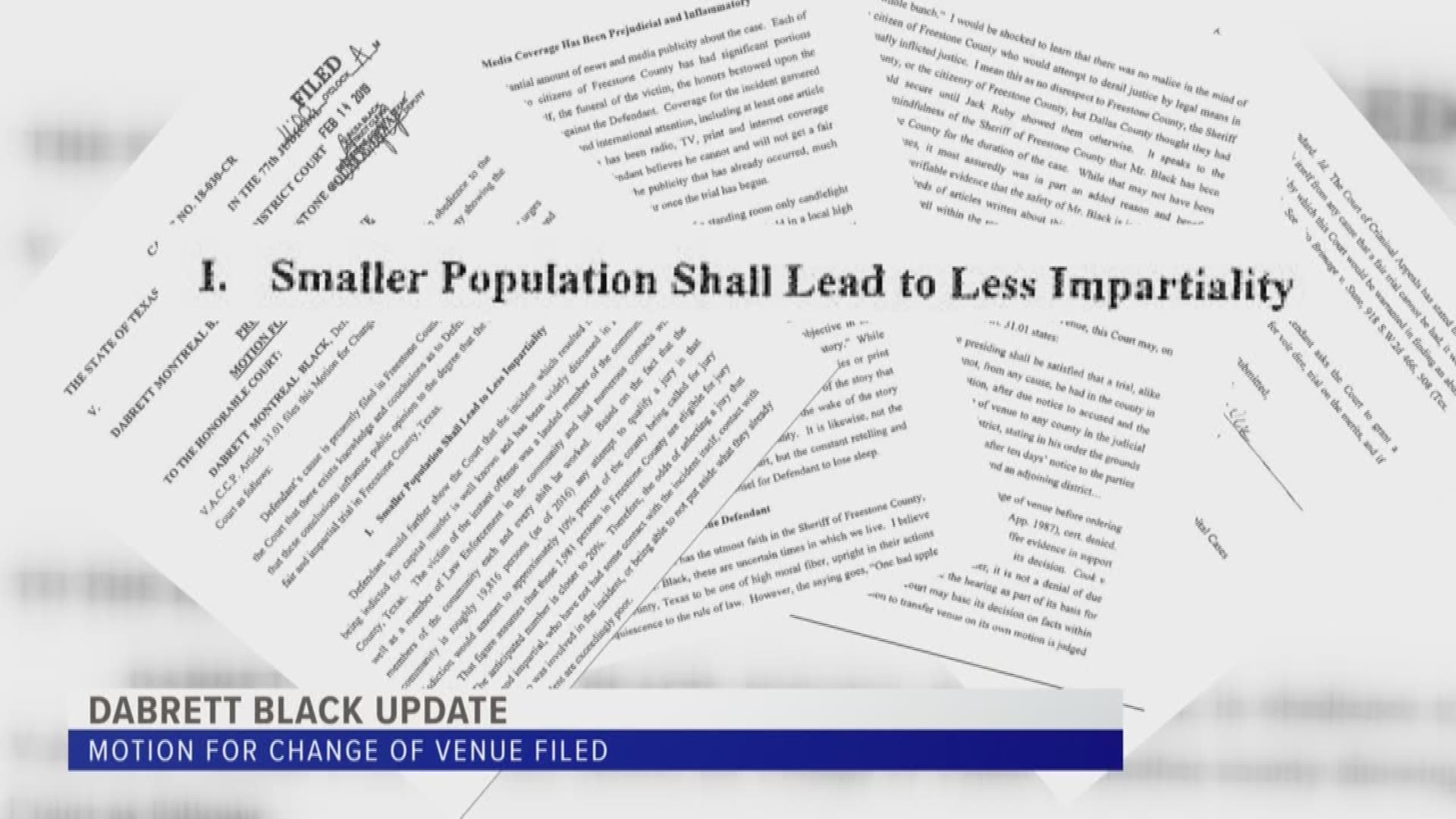 FREESTONE COUNTY, Texas — The attorneys for Dabrett Black, a man accused of fatally shooting DPS Trooper Damon Allen in 2017, filed a motion to change where the trial will take place.

Counsel for Black filed the motion for a change of venue with the Freestone County District Clerk on February 14, just before noon.

Black is facing capital murder charges for the death of Trooper Damon Allen on Thanksgiving 2017.

RELATED: Who is Dabrett Black? People describe the man charged with the murder of Trooper Damon Allen

His attorneys named multiple reasons listed for the change of venue.

Among these reasons are:

Black's attorneys argue Trooper Allen was well-known in the community where their defendant will be tried. Furthermore because the community's population is less than 20,000 based on 2016 figures, an impartial jury would be difficult to find.

According to the motion, finding a full jury from the aforementioned population, "who have not had some contact with the incident itself, contact with someone else who was involved in the incident, or being able to not put aside what they already know about the incident are exceedingly poor."

Pervasive media coverage has been prejudicial and inflammatory

Black's attorney's argue that Allen's death and funeral, including memorials and honors, attracted a large amount of media attention from television, radio, print and Internet sources. The attention spread not just to the state level, but to a national and international level.

Besides the coverage itself, Black's attorneys list the "vengeful commentary" that is left behind on the news stories as a worry, especially with many being anonymous. Counsel mentions the anonymity of the commentators means the person may or may not be from Freestone County.

Safety of the Defendant

Black's attorneys mention having the utmost faith in the Sheriff of Freestone County to maintain the safety of their client, but goes on to mention that these are uncertain times.

According to the motion, "I would be shocked to learn that there was no malice in the mind of at least one citizen of Freestone County who would attempt to derail justice be legal means in favor of personally inflicted justice."

The documents mention the case of the assassination of President John F. Kennedy saying, "Dallas County thought they had Lee Harvey Oswald secure until Jack Ruby showed them otherwise."

They would like the trial location moved to further ensure Black's continued safety.

The motion says the judge does not need to grant this particular motion to change the trial's venue. However, the motion stresses the judge should order a transfer if the judge believes a fair and impartial trial against Black cannot be had in the county where the trial is pending.

Lastly, the motion asks the Court to grant this motion to a county in an adjoining district for a trial on merits.

The prosecutors response is needed by 5 p.m. March 15, 2019 with the Judge ruling on the decision March 26 at 1:30 p.m. during the next scheduled pre-trial hearing.