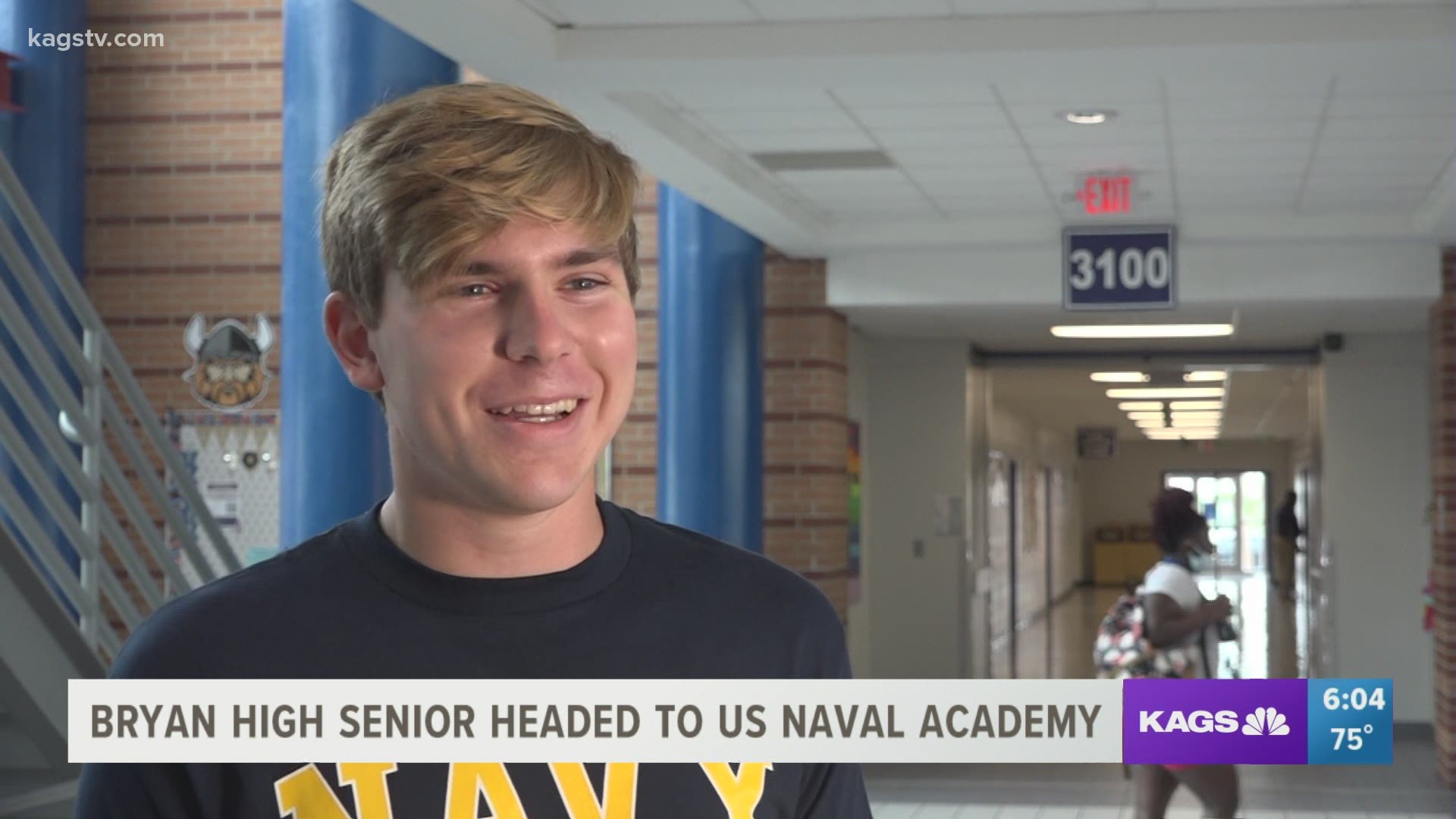 BRYAN, Texas — Bryan High School Senior, Charles McLaughlin, has been accepted into the United States Naval Academy once he graduates. BISD held an acceptance ceremony in front of Bryan High School on April 29 to honor McLaughlin for his accomplishments.

Getting this acceptance didn't come easy. A person has to show leadership qualities in extracurricular activities, be a good student and be nominated by a member of the United States Congress or Senate.

“I’m an Eagle Scout, I attended Boys State and was on the platform committee there. I'm one of the officers in NHS (National Honor Society)," McLaughlin said. "I've held lots and lots of leadership positions in my Boy Scout troop and I was a member of the football team."

.@NavalAcademy Midshipmen selected for @USMC commission have faced many challenges this past year and have risen to each occasion. My message to them: As our nation’s future leaders, keep pushing yourselves every day to take care of those in your charge and lead through adversity pic.twitter.com/jhQOZaMHBv

McLaughlin was nominated by Congressman Pete Sessions. Sessions came to the ceremony to offer his congratulations in person. McLaughlin said he is humbled by the attention and was eager to meet Sessions to thank him for the nomination.

“It was a massive honor to have someone of that standing, a United States representative, to come down for the honor and to be nominated by his office was great," McLaughlin said. "It’s always interesting to meet people who are in those higher positions, and I hope to be one of those people one day."

Congressman Sessions said McLaughlin's character and desire to lead was what impressed him most.

“He’s a young man who’s challenged himself academically, character wise, his character has been checked, he’s an Eagle Scout, he’s a leader, he’s a young man who cares for his country, understands the constitution of the United States, and is prepared to lead," Sessions said.

Charles is the fourth person from Brazos County to go through this nomination process to go to an academy. Sessions wants people to know this isn't an easy process but it's worth it.

“To be a nominee for an academy, there’s probably about 25 people for every person that is selected," Sessions said. "They ask to be nominated by that office and this office then goes through a selection process of looking at normally 50 people from a congressional district that exhibits that desire. It’s pure and simple battle at figuring out who would be best to represent that person."

McLaughlin plans to pursue mechanical engineering at the academy, then go into surface warfare.