These school districts defied Abbott's mask order by implementing mask mandates due to rising COVID-19 cases in their schools. 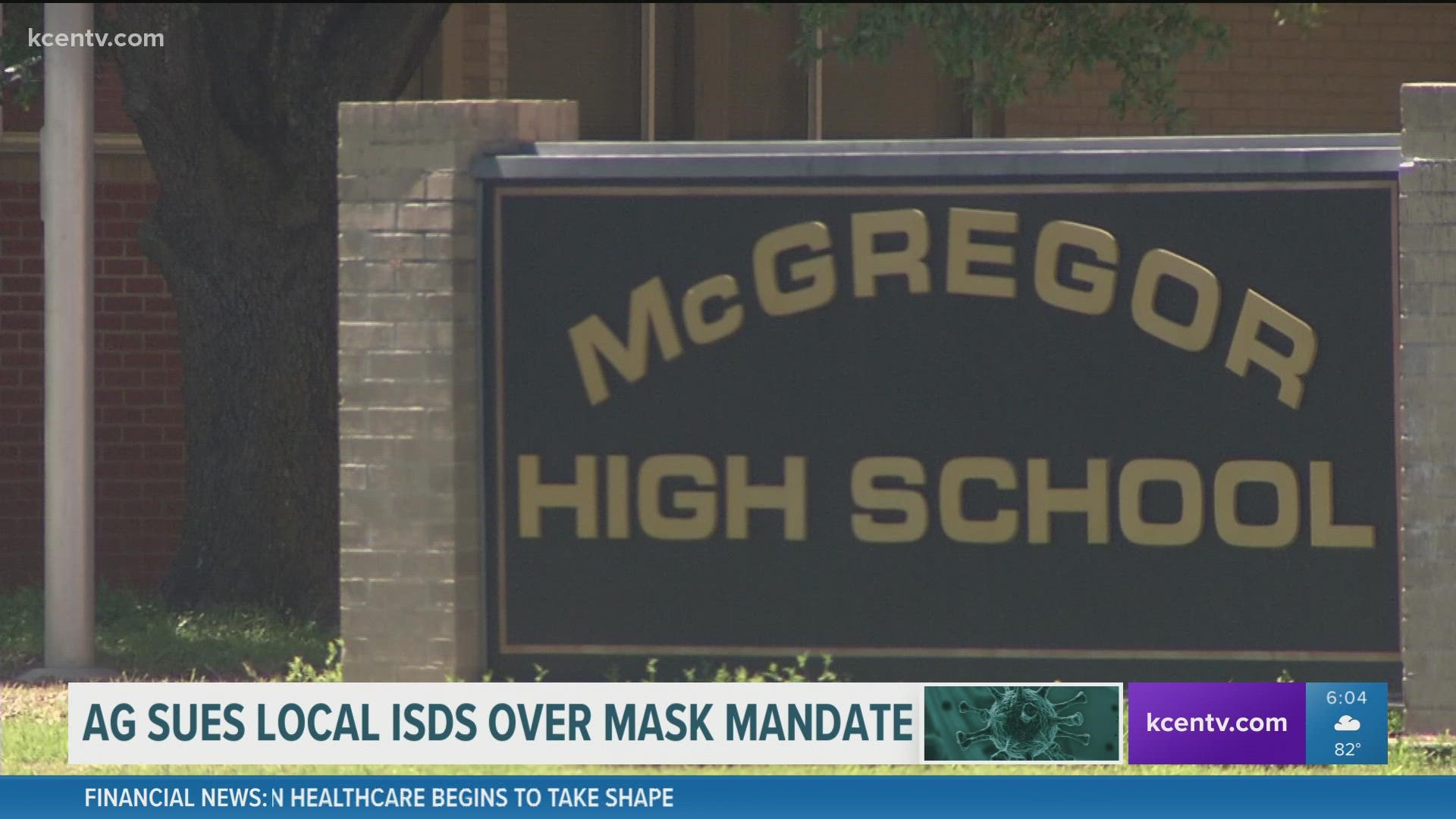 According to the lawsuit, these school districts defied Abbott's controversial mask order by implementing mask mandates for students and staff due to rising COVID-19 cases in their schools. Many districts across the state hoped the masks would help slow the spread of the virus, especially among those who can't get vaccinated yet (children younger than 12).

"Defendants disagree with Governor Abbott's policy choice. But Defendants must recognize they are not above the law," the lawsuit reads. "Waco ISD's, Midway ISD's, McGregor ISD's, and La Vega ISD's mask mandates should be immediately enjoined."

Waco ISD, however, is the only local district named in the lawsuit with an actual mask mandate enforced. On Aug. 26, Superintendent Dr. Susan Kincannon wrote a letter to employees and parents that Waco ISD was going to impose a mask mandate for all of its schools and facilities after it saw 55 positive cases four days into the new school year.

To date, the district has seen 600 cases since Aug. 1, according to its COVID-19 dashboard.

“As I’ve said before, I’m not interested in politics. I’m focused on taking care of kids. If and when Waco ISD is actually served in this lawsuit, we will review it and respond accordingly," Kincannon said in a statement regarding the lawsuit.

“In the meantime, two things are clear. Courts across the state are deeply divided over whether the mask provisions of the governor’s executive order have the force of law. More importantly, since requiring masks in all Waco ISD buildings, the number of students and employees reporting that they have tested positive for COVID-19 has decreased significantly," she added.

"Not only are superintendents across Texas openly violating state law, but they are using district resources --- that ought to be used for teacher merit raises or other educational benefits -- to defend their unlawful political maneuvering," Paxton said in a news release.

Meanwhile, McGregor ISD, La Vega ISD and Midway ISD do not have mask mandates in place. Both McGregor and La Vega ISD said it would put a mask mandate in place if the positive rate topped 2%. One Midway ISD school, River Valley Intermediate, issued a directive over Labor Day weekend regarding wearing masks for 10 school days.

“We’ve respected the Governor's order while implementing a thoughtful, measured, temporary response at one of our campuses that had high numbers,” spokeswoman Traci Marlin said, “[River Valley Intermediate] was not a mandate. We used the word directive. We were directing people to participate and help get these numbers down. There was no enforcement. There was no punishment for not participating in the request for 10 days. It was an ask. It was a plea for help to help us get through and not close a campus for a few days. It was not a Mandate.”

“Now we have heard there is a lawsuit but we have yet to be contacted,” Marlin said.

"While the district achieved 90% compliance, it did not enforce the requirement, as demonstrated by the fact that no students, employees, or members of the community have been excluded or punished for non-compliance," Lenamon said in the statement. "So, the district is disappointed that the AG has decided to sue anyway."

Connally ISD and Salado ISD was also listed as districts that weren't in compliance in a list here. However, they only received a letter for not being in compliance to GA-38, according to the site.

Connally ISD required masks for its campuses after the district lost two of its teachers to COVID-19 in less than a week.

Killeen ISD was also on the list, however, the site indicates they are now in compliance.