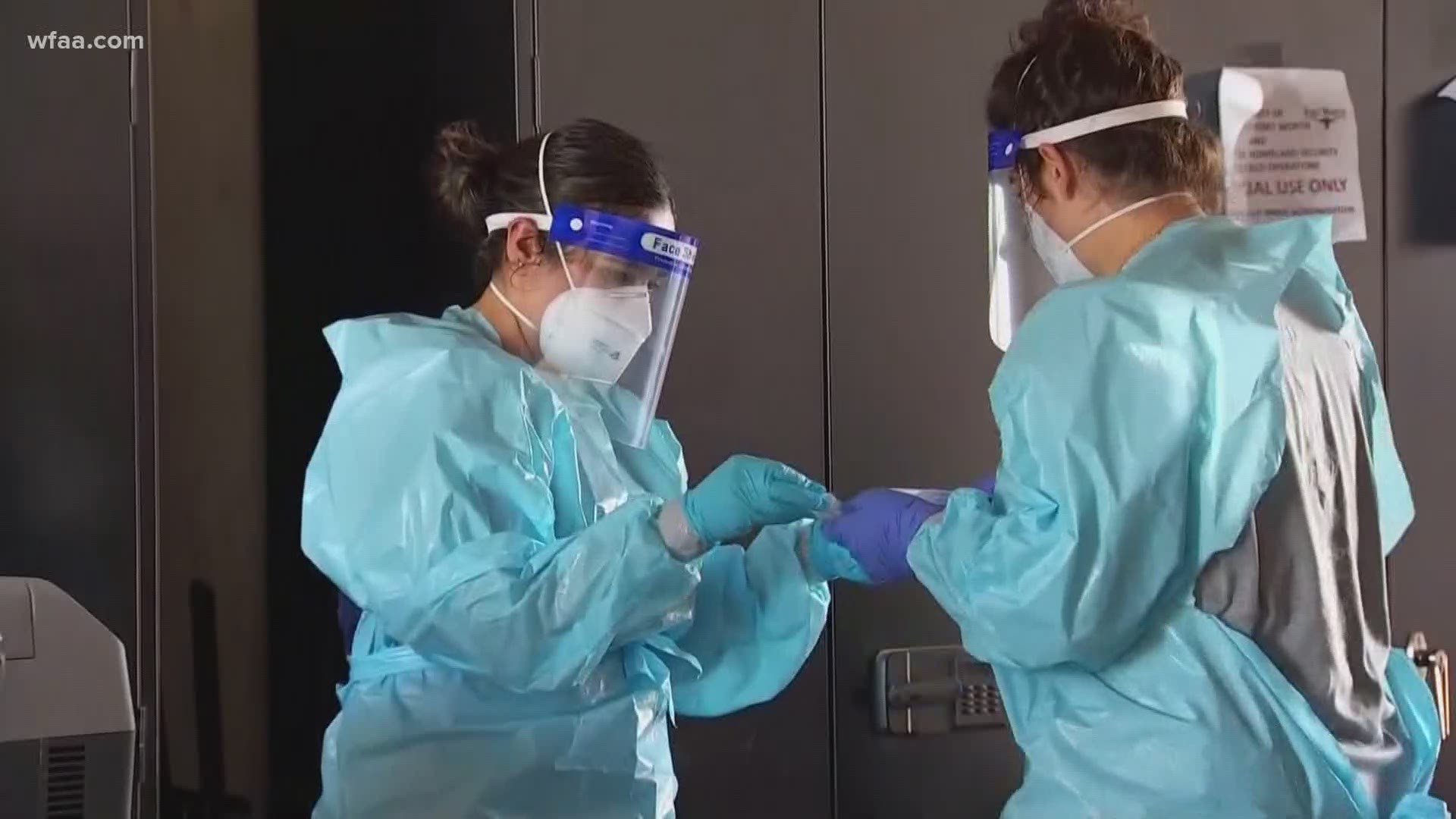 This story will be continuously updated on June 16.

On Monday, 305 new cases were announced.

The youngest of the deaths reported Tuesday was a Dallas man in his 30's who had underlying health conditions. He was critically ill at an area hospital. A Dallas woman in her 90's was a long-term care facility resident and she died there, officials said. She had underlying conditions.

The eight deaths bring the county total to 293 and the case total is 14,843 since tracking began in March.

Collin County reported its highest cases reported in a single day on Tuesday with 120 new cases in the county.

That breaks the county's previous record of 106 cases reported on June 4.

The spike in cases in Collin County include 27 in Plano and 12 in Frisco.

Gov. Greg Abbott said the single-day high is due to testing results from a nursing home.

A Crowley woman in her 70s with "no underlying health conditions" died from COVID-19, according to health officials. Her death brings the countywide total of coronavirus-related deaths to 198.

The number of hospitalized coronavirus patients rose by 16 on Tuesday to 220 in the county.

The county reported it has 2,159 available hospital beds.

There are now at least 2,518 people currently hospitalized across Texas with COVID-19, the highest number the state has seen since the pandemic began. That number jumped up by about 200 more people from Monday's statewide report.

Despite this, Gov. Greg Abbott said Tuesday that there is an "abundant number of hospital beds" still available in the state. He spoke Tuesday afternoon following days of an upward trend in tests and hospitalizations across the state.

Hospitalizations are up 67% statewide and 48% regionally since Memorial Day.

Denton County Public Health announced 40 new positive cases in the county, bringing the county total to 1,812 cases. There have been 36 deaths and 961 recoveries.

RELATED: Here are the confirmed coronavirus cases in Denton County

The county originally declared a disaster on March 12 in response to the pandemic.

On Tuesday, Dallas County Judge Clay Jenkins said on Twitter that he has submitted several recommendations to Gov. Greg Abbott's office as well as to the state's emergency management department to combat the rise in infections and hospitalizations across Texas.

Those recommendations included allowing local governments to require people to wear face coverings, which Jenkins said "may be the single most important epidemic control measure" to reopen.

"Thus far our experience indicates that adequate compliance will not be achieved without additional policy options to promote and require masking," he wrote to the state. "If we have more tools to help compel persons to be compliant with wearing of facial coverings, we will have our best opportunity to successfully re-open Dallas County and our economy."

Jenkins also asked the state to be more flexible with its funds for testing by allowing local governments to determine how to expand testing efforts and use local labs to act nimbly and quickly. He said one reason why they'd like to see more flexibility is to allow them to test all inmates moving through intake at the county jail.

An Arlington Independent School District student who had gone to Strength and Conditioning Camp at Martin High School has tested positive for COVID-19, district officials said.

School officials were alerted to the positive result on Monday.

The camp has been postponed until all parents are notified and officials finish the contract tracing process, according to the district. Its facilities will be "thoroughly" cleaned.

A fourth person who lived in Hood County has died after contracting COVID-19, health officials said.

The patient had been at a hospital outside of Hood County when they died from complications due to the coronavirus, according to officials.

Hood County has had a total of 35 cases confirmed by the state since tracking began in March, county health officials said. Local authorities are reporting two additional cases that the state is investigating. Five of the 37 total cases are considered "active."

The Justice of the Peace moratorium on evictions ended at midnight Tuesday in Dallas County.

The June 15 date was an extension from the previous May 18 date. Dallas County Judge Clay Jenkins extended the moratorium date on May 21.

Jenkins tweeted out a copy of the ordinance, which you can find here in English and here in Spanish.

He urged those facing eviction to know their rights when it comes to dealing with a Justice of the Peace and to rely on community resources for help with rent.

"Our public health system and the health of our community can’t afford couch surfers or more homelessness when we are at new record highs for #COVID19," Jenkins said in a follow-up tweet.

Health experts recommend taking the following actions to prevent the spread of COVID-19: