Restaurants and bars that serve food can begin seating up to 50 percent of their normal indoor capacity starting Sept. 21. But they can't sell alcohol after 10 p.m. 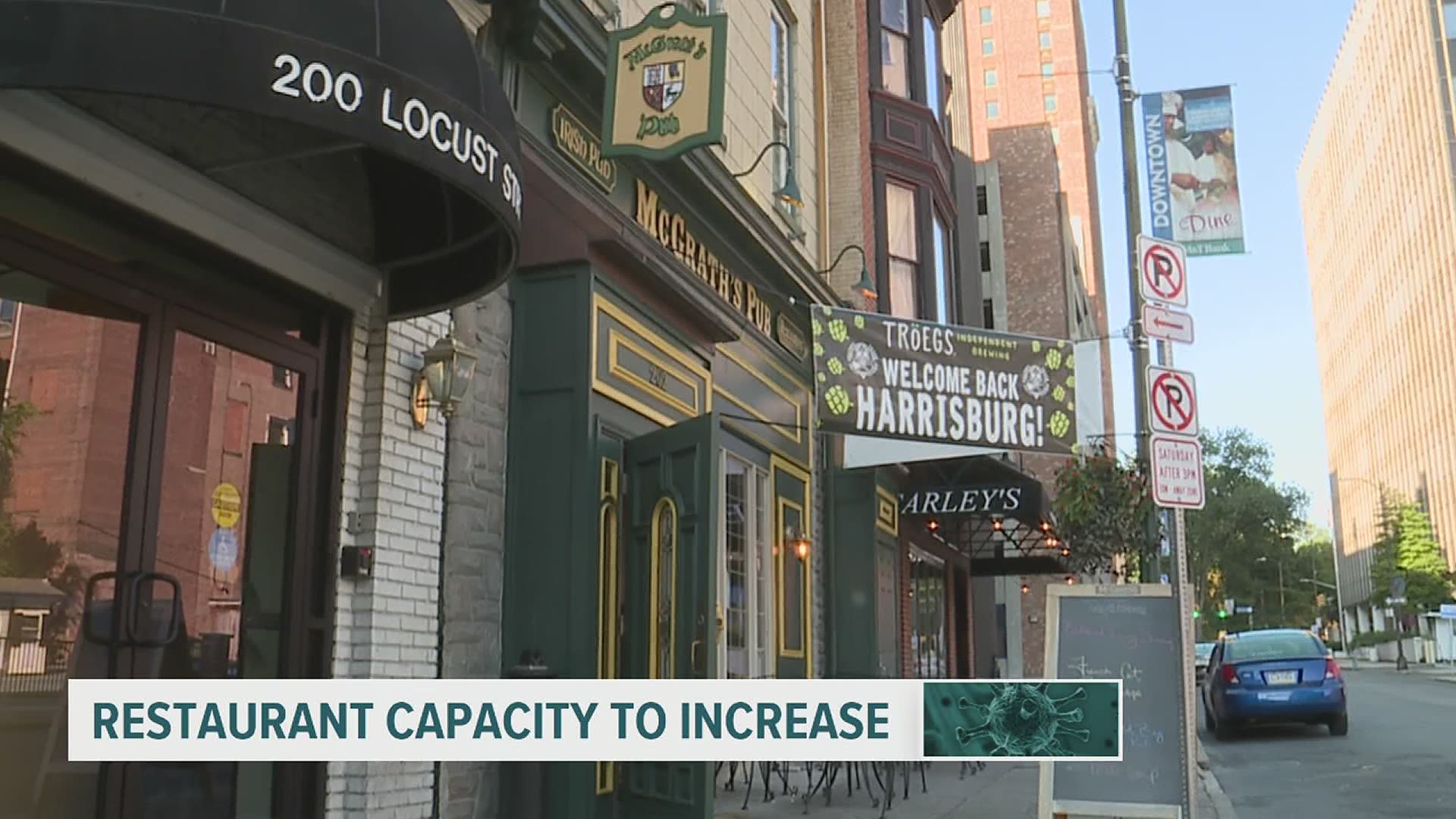 HARRISBURG, Pa. — Restaurants and bars that serve food can begin seating up to 50 percent of their normal indoor capacity starting Sept. 21.

The announcement from Gov. Tom Wolf raises indoor seating limits from the 25 percent capacity limit imposed in mid-July, when case counts were rising. After case counts declined in the last month, health officials said they could gradually increase capacity limits.

The service industry responded with a mixed reaction.

“Like anything, the devil's always in the details,” said Chuck Moran, executive director of the Pennsylvania Licensed Beverage and Tavern Association.

The higher capacity does, in fact, come with some strings attached. Restaurants and bars will have to complete a state “self-certification” committing to follow all state health and safety measures, such as keeping tables at least 6 feet apart and ensuring customers wear masks when not seated at a table.

The state will maintain a public database of all restaurants that self-certify.

Only 40 percent of Americans feel comfortable dining out right now, according to a survey by Longwoods International, a tourism research company.

“When you go out to the restaurant, you know that your restaurant has filled out this self-certification pledge and form, and feel comfortable going to that restaurant,” she said.

That boost of confidence may be little solace to venues that make most of their money from alcohol sales, as the new rules governing restaurants also include a curfew on selling alcohol after 10 p.m.

The curfew on alcohol sales will help reduce community spread, especially among college students and young people, Dr. Levine said.
McGrath’s Irish Pub in Harrisburg traditionally made a large percentage of its income through alcohol sales. Owner Adam Sturges said the current requirement to serve food with alcohol has already discouraged quite a few patrons from coming to have a drink at the pub.

McGrath’s is currently open seven days a week from 11:30 a.m. to 11 p.m. The 10 to 11 p.m. hour is one of their busiest, Sturges said, but after the new rules take effect the restaurant will probably close at 10 p.m. He hoped patrons would adjust their schedules to make up for the lost hour of business.

“It's just going to force people to go out earlier, so hopefully we see an uptick in business on the whole,” Sturges said.

Others were not as optimistic as Sturges. Chuck Moran said the curfew will only hurt bars more.

“This does not help the industry,” Moran said. “It's very confusing. And it's generating more questions than there are answers right now.”

Up to 70 percent of small-business taverns and licensed restaurants in Pennsylvania could go out of business because of the pandemic, according to a survey conducted in August by the Pennsylvania Licensed Beverage and Tavern Association. Thirteen percent of businesses reported already having had to close, 5 percent indicated they would need to close within a month, 29 percent said would likely close by the end of the year, and 23 percent said they would likely close in 2021.

Only 30 percent of businesses indicated they would not close.
“Every week is a new challenge, a new puzzle,” Sturges said. “Ok, how are we going to make things work this way?”
The documents and forms to complete the self-certification will be made available online Sept. 21.

To operate at 50 percent indoor capacity, businesses must complete the self-certification by Oct. 5.