Monica Tellez-Arste hopes others heed warnings about the coronavirus after hearing her family's story. 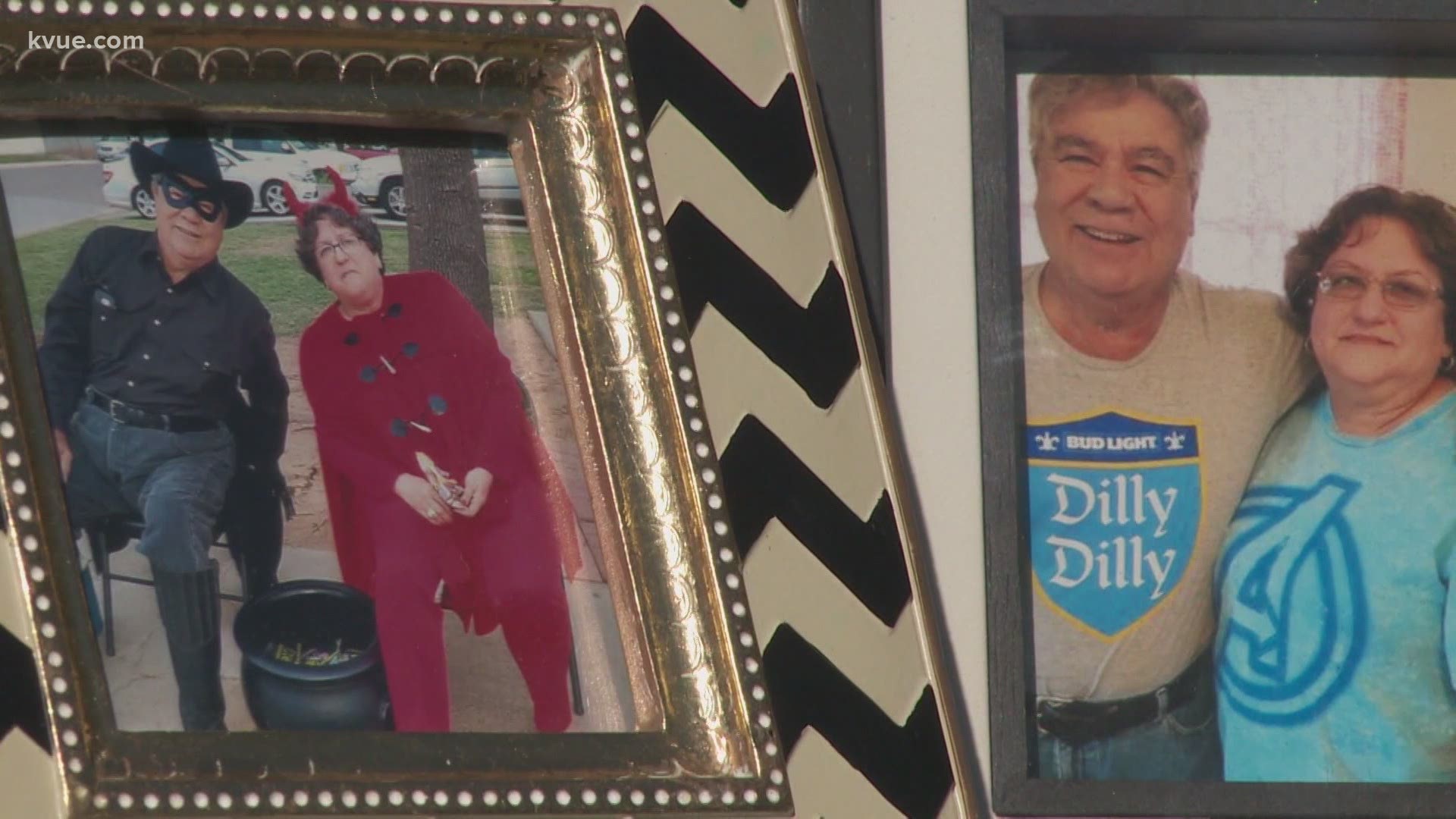 ROUND ROCK, Williamson County — It's the little things that Monica Tellez-Arste now finds herself treasuring.

"My mom got me this little butterfly to hang as a rearview mirror decoration," Tellez-Arste said.

Tellez-Arste, a wife and mother of two, never realized how a small green-and-yellow metal butterfly car charm could end up meaning so much.

"And so, this was the last thing she gave to me," Tellez-Arste said as tears rolled down her face.

Not long after Tellez-Arste received the butterfly in the mail as a surprise birthday gift, her mother, Mari Tellez, was hospitalized in their hometown of Laredo for chest pains. Eventually, she tested positive for COVID-19.

"That night when he arrived, the nurses were kind enough to let my mom and dad see each other in the hallway across from each other. And that would be the last time they saw each other," Tellez-Arste said.

She said her mother's symptoms started mild. Doctors even released her from the hospital. But days later, Mari Tellez got so sick an ambulance had to rush her back.

For 27 days, Tellez-Arste watched as her once-healthy mother fought to stay alive.

She said she found it baffling because her mother left the house only to grocery shop and when she did, she wore a mask and practiced social distancing.

For the next month, it was a roller coaster of emotions for Tellez-Arste and her family.

RELATED: 'You never know who you're going to save.' Austin woman's story highlights need for minorities in vaccine trials

"It was a nightmare, really ... The X-rays looked like she had COPD. That's how badly damaged her lungs were from the COVID pneumonia ... So, you know, there was really no going back from that. Her body was just too weak and her lungs were too damaged to be able to be off of the ventilator," Tellez-Arste said.

"A couple of days later, her kidneys started shutting down, and then her liver was inflamed. And then, eventually, you know, her heart stopped," Tellez-Arste said through tears.

She never knew that her husband had passed away the month before.

"We were so worried about having to tell Mom about what had happened to Dad. But, you know, that day never came up. That day never came. We never had to tell her because we never got to talk to her again," Tellez-Arste said.

Tellez-Arste said her father's pulmonary fibrosis, or lung disease, made him vulnerable to the virus.

RELATED: 'He didn't deserve to suffer like he did': Family of Idaho man who died from COVID-19 remembers his painful final days

"It was just the most devastating thing, I think, that my family has ever, ever going through. And it's just a heartache that we'll never, ever get over," she said.

COVID-19 didn't just impact Tellez-Arste's parents. Right after Rick and Mari Tellez died, Tellez-Arste's sister, brother-in-law, brother, sister-in-law, and nephew all contracted the virus as well. They recovered, but it gave the entire family another scare.

It's an experience she doesn't want anyone to have to go through. That's why she's sharing her heartbreaking story: She hopes to change attitudes about the coronavirus.

Tellez-Arste said she can't keep quiet anymore as cases of COVID-19 rise at unprecedented rates in the Austin area, in Texas, and across the country.

"Every time you go out, you're taking a risk," she said.

PHOTOS: Round Rock woman loses parents to COVID-19 within weeks of each other

Tellez-Arste wants to send a message: Take this virus seriously and stay home if you can.

As for pandemic fatigue, she said it's about perspective.

"We're all tired. I understand that, you know, this is hard. It's the hardest thing we probably had to do ever as a country," she said.

And as the country prepares for a new president, she hopes for tougher COVID-19 guidelines, because she has already lost too much.

WATCH: Round Rock woman loses both parents to COVID-19 within weeks of each other