What happens inside JBSA-Lackland quarantine?

The San Antonio base has held hundreds of coronavirus evacuees. Here's what the quarantine site is like for those inside and outside the base.

SAN ANTONIO — The Lackland Air Force Base in San Antonio is a city within a city — with a movie theater, a bowling alley, and its own school district. In the last month, it also became Texas’ ground zero for the new coronavirus.

The more than four square miles in the state’s second most populous city is home to one of a handful of federal quarantine sites across the country, housing people who’ve been overseas and exposed to the virus that causes COVID-19.

Since February, 235 American evacuees from China’s Hubei province, the epicenter of the illness’ outbreak, and a cruise ship in Japan have stayed on the base. Of those, 11 tested positive for the virus and were sent to a local medical center for isolated treatment.

98 more people are expected to arrive Wednesday at Lackland from the Grand Princess, another contaminated cruise ship, according to a spokesperson with the Centers for Disease Control and Prevention.

The new evacuees were to undergo additional screening before being sent to their rooms, the spokesperson, Joey Smith, said. The cruise ship evacuees ranged in age from infancy to more than 90-years-old and lived in about a dozen different states, but he did not know the ages or homes of those who came to Lackland. All had been screened on the cruise ship as well and did not have symptoms.

“Quarantine is, by definition, for healthy people,” Smith said.

Since the new coronavirus began rapidly spreading throughout the world, sparking public health emergency declarations and killing thousands, federal authorities have looked to military bases to house U.S. citizens who have been exposed to COVID-19 but aren’t showing any symptoms.

They chose the San Antonio site because of its large lodging capacity, according to a Lackland posting. Smith said it can house up to 380 people in quarantine. The base has multiple hotels whose single rooms have private bathrooms, the space to keep military personnel and locals separated from evacuees, and is close to high-quality medical facilities, like the Texas Center for Infectious Disease.

The base’s previous evacuees were stuck in a hotel for at least two weeks surrounded by temporary chain-link fencing propped up by sand bags. U.S. Marshals patrolled the fence’s perimeter to ensure no one got out. For some, it felt like a prison. Others said the first few days were rough, but overall it was a huge step up from lockdown on a cruise ship.

“They do have a Domino’s on base which we could order,” said Rachel Torres, a 24-year-old pediatric occupational therapist from Irving who was quarantined with her new husband for nearly a month on the Diamond Princess cruise ship and at Lackland. “It was the best pizza we ever ordered.”

Torres and her husband, Tyler, spent 15 days at Lackland on the third floor of a garden-style inn. Outside their window, they could see personnel from emergency teams and the CDC outside the fence line gearing up in what looked like hazmat suits to come bring them their meals and take their temperatures.

The hotel on Lackland Air Force Base where Tyler and Rachel Torres were quarantined.

A temporary fence erected around the quarantined hotel on Lackland Air Force Base.

The first few days, little information was given. Eventually, they were told they could go outside if they kept on face masks and stayed six feet away from other evacuees. But it was still strongly discouraged. The Torreses tried to stay in their room as much as they could bear — they only went outside a few hours during the two weeks — because they desperately didn’t want to catch the virus and end up separated, with one in the hospital and the other resetting their two-week quarantine clock.

For the newlyweds, what they dubbed “Corona Camp” was doable. Twice a day, they were checked for symptoms, like coughing or a fever. They got government-issued phones where, after the first few days, they could receive updates in a daily conference call. Food from a contracted caterer was delivered three times a day, mostly on time, and they could get snacks and have care packages delivered. One night, after Rachel Torres was distressed seeing an ambulance outside, workers in their suits came and brought her Dr. Pepper.

“They really did do everything possible to make us comfortable,” she said. But, she later added, “it was a very strict quarantine.”

The cruise ship passengers thought their long-awaited last day in confinement was March 2. But then San Antonio Mayor Ron Nirenberg declared a public health emergency and forbid previously-quarantined evacuees from entering his city — essentially keeping them pent up. His actions came after the CDC released a previously isolated coronavirus evacuee who later tested “weakly positive” for the virus.

It was too much for some kept in a Lackland hotel room. Sommer Gunia, an Arizona surgeon who was going on day 27 of a quarantine, said it was “gut punching.”

“Me, my family are still healthy and yet we're still imprisoned on an airbase in Texas,” she said on the phone outside the hotel last week. “For them just to pull the rug right out from underneath us this morning at 8:30 [a.m.], it’s pretty hurtful. They let us pack again, they let us believe that we were going to go home.”

Placing evacuees inside a military community with about 6,500 residents within a city of nearly 1.5 million has raised concerns inside and out of Lackland’s fences.

As of Tuesday evening, there was no publicly disclosed case of community spread of the new coronavirus, but the number of people in Texas who have tested positive for the virus grew to at least 30. Eleven were those who had been quarantined at Lackland before being taken to a local medical center upon testing positive.

Tensions spiked in San Antonio after the release of the “weakly positive” patient. The city of San Antonio unsuccessfully filed suit against the CDC, demanding more rigorous testing before release. But the same day, the CDC revised its testing and release protocols for infected patients, seemingly calming the waters with local officials, and the evacuees, including the Torreses and Gunia, were allowed to go home the next day.

With new evacuees arriving, officials are again questioning where those who test positive in quarantine should be treated. Local and state officials have said they want to keep patients at Lackland instead of sending them off base to local medical centers — both to contain the virus and keep hospitals free for Texans. 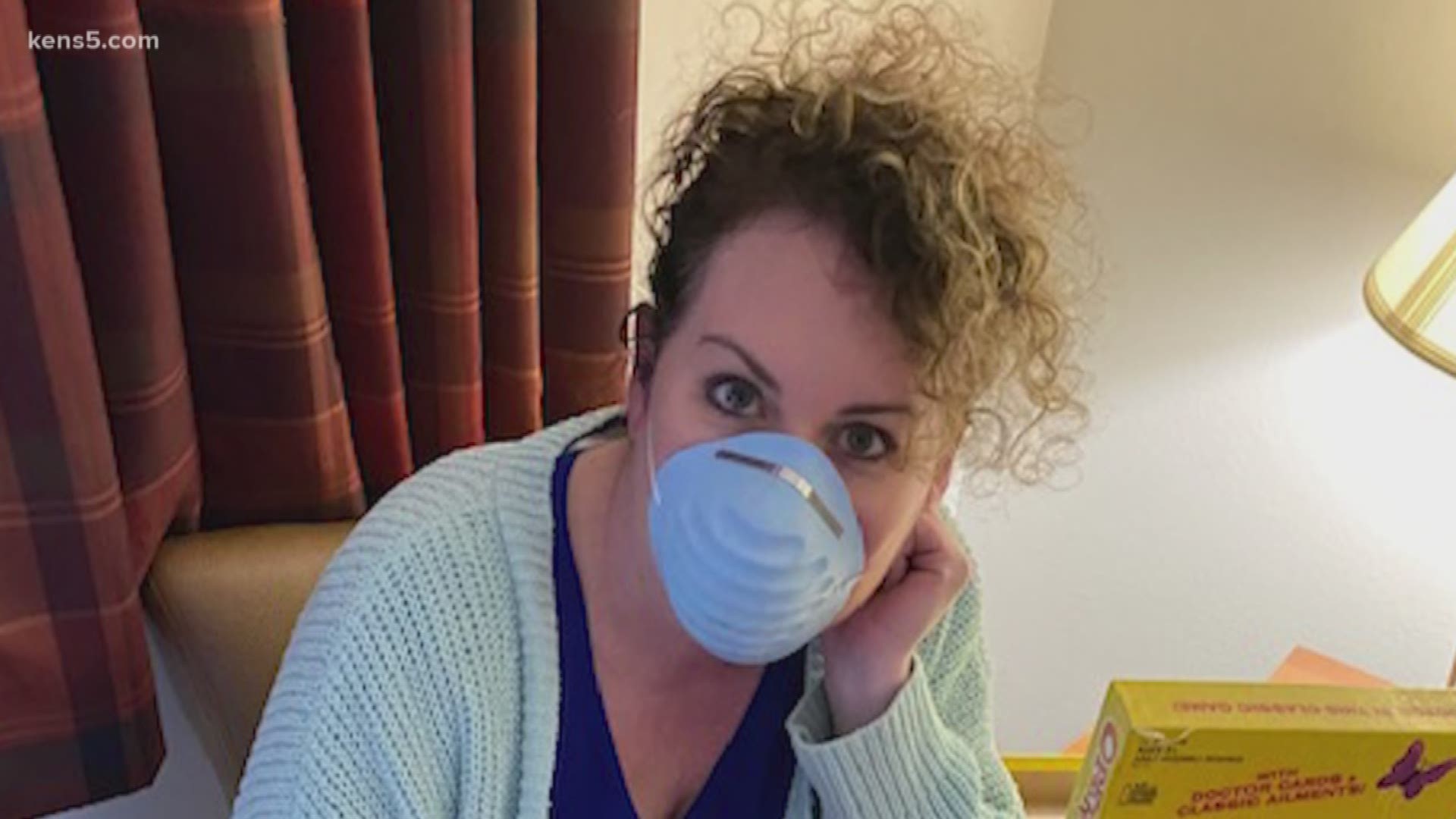 Last month, U.S. Rep. Joaquin Castro, D-San Antonio, said that infected people with minor symptoms could be isolated at the base and limit local exposure of the virus.

“Our community has a limited number of isolation rooms and filling them with people not in need of hospital-level care is not an appropriate use of these rooms,” he said in a statement.

As of Monday, a spokesperson for San Antonio Metro Health said anyone who tests positives or shows symptoms of COVID-19 in quarantine is taken off base and sent to San Antonio’s Texas Center for Infectious Disease. Though no earlier evacuees remained at Lackland, 10 people who had tested positive for COVID-19 while quarantined on base remained in isolation at TCID, officials said. Nirenberg said they were asymptomatic at this point and awaiting discharge based on test results.

Tuesday evening, however, Gov. Greg Abbott’s office said he was assured by the U.S. Department of Health and Human Services that “no one who is not a Texan will be released to a local or state health facility.”

Smith at the CDC said Tuesday night those who test positive will not stay on base, and that discussions are still taking place on where they would go.

Awaiting the arrival of the Grand Princess evacuees, Michelle Vigil at Metro Health said Monday the new cruise ship from Hawaii has had less time in its own quarantine than the Diamond Princess in Japan, so officials are hopeful for less virus contamination in their next round of evacuees.

“I think we have a lot more faith in this cruise than the one in Japan,” she said.

As the new arrivals begin settling in for their time at the Gateway Villa hotel on Lackland base, Tyler Torres — now home in Irving — offered some optimism.

“The first couple of days are going to be a little rough, but it does get better.”

This story originally appeared in the Texas Tribune.