A KAGS Investigation has revealed at least seven donations, dispersed amongst three separate candidates, were discovered to have come from corporations, which is illegal under Texas State Election Code. 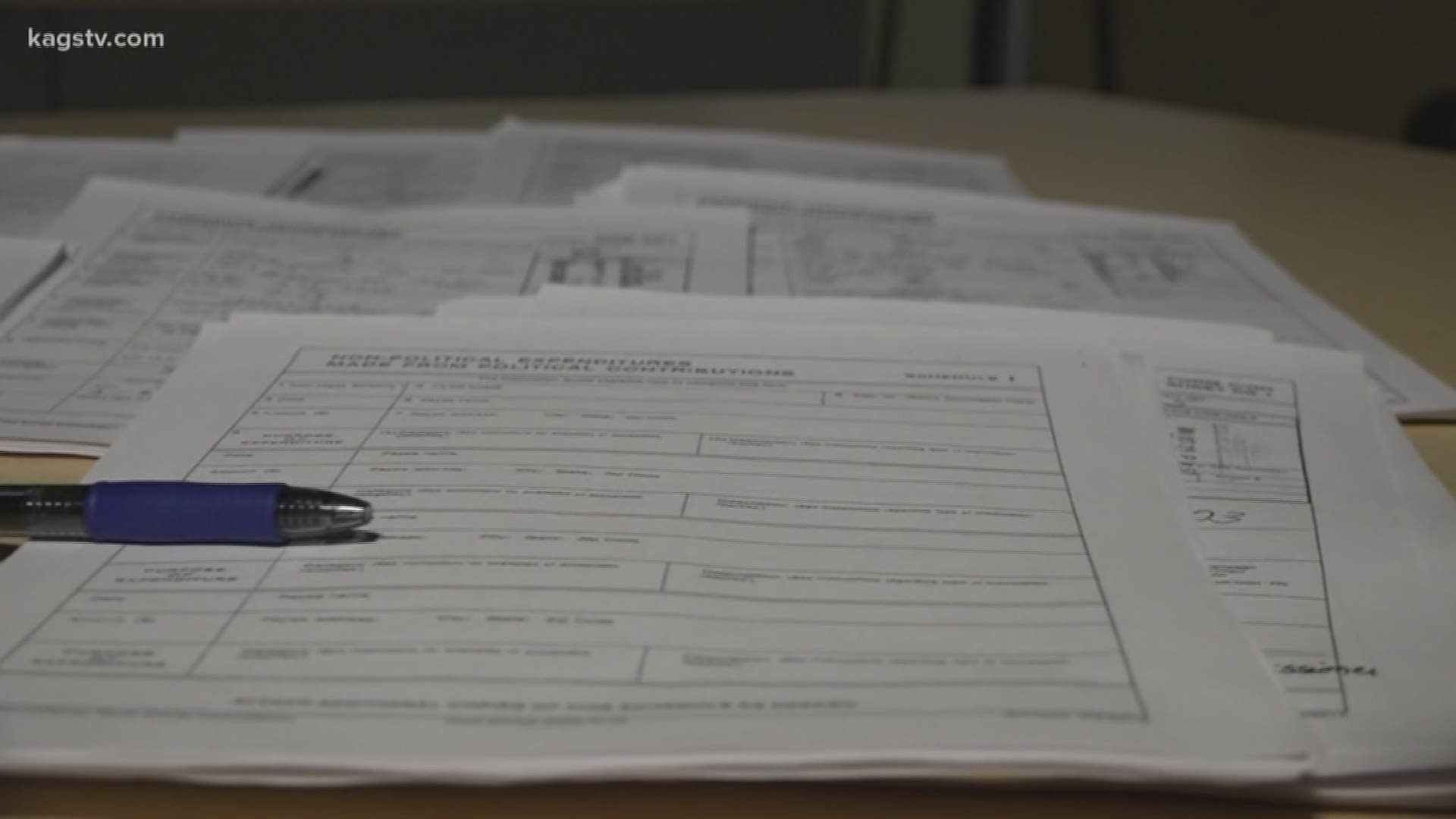 At least seven donations, dispersed amongst three separate candidates, were discovered to have come from corporations between 2017 and 2018, which is illegal under Texas State Election Code. Additionally, nine separate instances were found where candidates did not fill out the entire form, as required.

Most of these filings, which are legally required, went unread for months. The system put in place to accept and sort these records does not require that they be checked, and thus violations may slip through the cracks.

“I can read them. We can look at them. But…we don’t have the authority to make sure they’re correct. We don’t check them,” said Brazos County Elections Administrator Trudy Hancock. “We have to take [each filing] as full faith.”

The Texas Ethics Commission, the state agency tasked with enforcing these laws, creates the documents. But, they do not go out looking for rule breakers. Instead, they operate on a complaint basis, only investigating potential violations after members of the public come to them.

The agency says that is what current law bounds them to do.

But, if no one reads these documents, potential violations can go unchecked and unreported.

“Some candidates have come in asking for their opponents’ [filings], but no. Most of the time no one comes in and reads them,” said Hancock.

Candidates for state, county, and local office have to fill out financial disclosure forms, detailing where they make their money and who has donated to their campaigns. At the state level, forms are sent directly to the ethics commission and digitized. At the county and local levels, forms are gathered at various elections offices for the public to request.

JAY O’BRIEN: “What if someone says, ‘Trudy, I’m not going to file my report.’ Can you do anything?”

O’BRIEN: “And that’s state law that they file this report, correct?”

Of the potential improper contributions uncovered in this investigation, one, a College Station candidate, said he did not remember the donation. Two, including current district clerk Gabriel Garcia, said they gave the money back.

The ethics commission told us they do not confirm the existence of complaints against any Texas politicians. They added that the complaint system was set up by the legislature in Texas Election Code.

“The Texas Ethics Commission is required by Chapter 571 of the Texas Government Code to enforce certain laws and has the authority to impose civil penalties for violations,” said Interim Ethics Commission Executive Director Ian Steusloff in a statement to KAGS. “That chapter sets out a process by which any person who is a resident of the State of Texas, or who owns real property in the State of Texas, may file a complaint with the Commission.”

Steusloff added that the only other way for elections investigations to begin, under current law, is by a vote of six state ethics commissioners or by a prosecutor.

“I think when you’re in elected office that a lot of people scrutinize those reports and if they find anything they will file a complaint,” said State Representative Stephanie Klick, the chair of the Texas House Elections Committee.

Klick added she believes the system works and sees the only other alternative of having all local and county candidates file with the ethics commission, instead of county authorities. That idea, added Klick, may have to go through her committee and has not picked up any political traction.

In Brazos County, Trudy Hancock said she does not see many people request these records.

JAY O’BRIEN: In your 20 years in elections, have you ever had anyone request all of the filings for all people running for county seats and go through them with a fine tooth comb?

NOTE: KAGS has withheld the name of multiple candidates who were uncovered to have accepted a corporate contribution or those who misfiled. For alleged corporate donations, we revealed the name of the only candidate who won and took public office. Our belief is that names detract from the larger message of oversight.