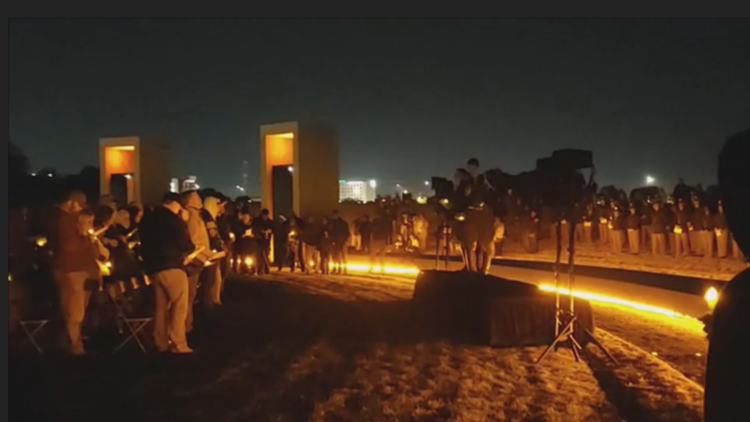 Photo by: KAGS NEWS
Hundreds of people gathered at Bonfire Memorial to honor the 12 people who died on Nov. 18, 1999 when the stack collapsed.

Unbroken circle: Aggies gather at Bonfire Memorial to honor the 12 lost in '99 collapse

COLLEGE STATION, Texas — It's hard to believe that hundreds of people gathered in one spot could do so in silence, yet, that's what happened early Monday morning at Bonfire Memorial in College Station.

If you've never stopped to see Bonfire Memorial on the campus of Texas A&M, it really is quite something. It's hard to describe the feelings you have the moment you enter and began to walk down the path to the ring of portals. Members of the Corps of Cadets and student volunteers stand along the path, keeping watch. You realize quickly it's not a place for talking, but a place that commands a quiet respect.

The 12 portals surrounding the spirit ring represent each of the people who died. "It is said that as you step into those portals, you step into the lives of that Aggie," a memorial speaker said. "They embody the spirit of the 12th Man."

Members of the Corps of Cadets also stand watch at each portal, some holding flickering candles. Red, white, maroon and other colored roses lay at the entrance to each portal, and people pause for a moment, then delicately step, careful not to disturb or crush the loving tribute.

A member of the Corps of Cadets stands near the entrance of a portal at Bonfire Memorial.
KAGS NEWS

The crowd huddles against one another as family members and loved ones of the victims are seated near the front. There are many Aggies here who were not born yet when Bonfire collapsed on Nov. 18, 1999. Many of the people here had never met the 12 who died, and yet, here they stand to honor them, sing to them and remember them.

At 2:42 a.m., the moment Bonfire collapsed that day, drums were heard in the darkness. "The Aggie family is unique, in that it transcends time," said one of the memorial speakers. "The spirit binds those that have gone before us and in generations to come." A reading of 'We Remember Them', a poem by Rabbi Sylvan Kamens and Rabbi Jack Riemer, is read aloud. Aggies said 'we remember them' after each line of the poem is read.

"In times of great misfortune and great tragedy, we're reminded of how fragile, how fleeting our lives can be," TAMU President, Michael K. Young said. "But, at the same time, we know the memories are eternal."

Hours after Bonfire collapsed, Jeff Whiting placed his Aggie ring near the scene. The Aggie ring is coveted by many, a symbol of accomplishment and a bond that never ends among fellow Aggies. Whiting realized 11 of those who had died in the collapse would never experience the moment of wearing their ring for the first time. One of them would never wear their ring again. He left his ring to honor the 12 and soon, it was joined by 30 more rings.

"Today, Aggies everywhere still wear rings," Young said. "Rings that remind us of that eternal circle, an unbroken circle of the Aggie family."

"As we stand here tonight," another speaker said, "we are proof that spirit is still strong today. We will always remember those that we have lost. Gone, but never forgotten." The names of those who died are each read, with the crowd responding 'here' after each name. 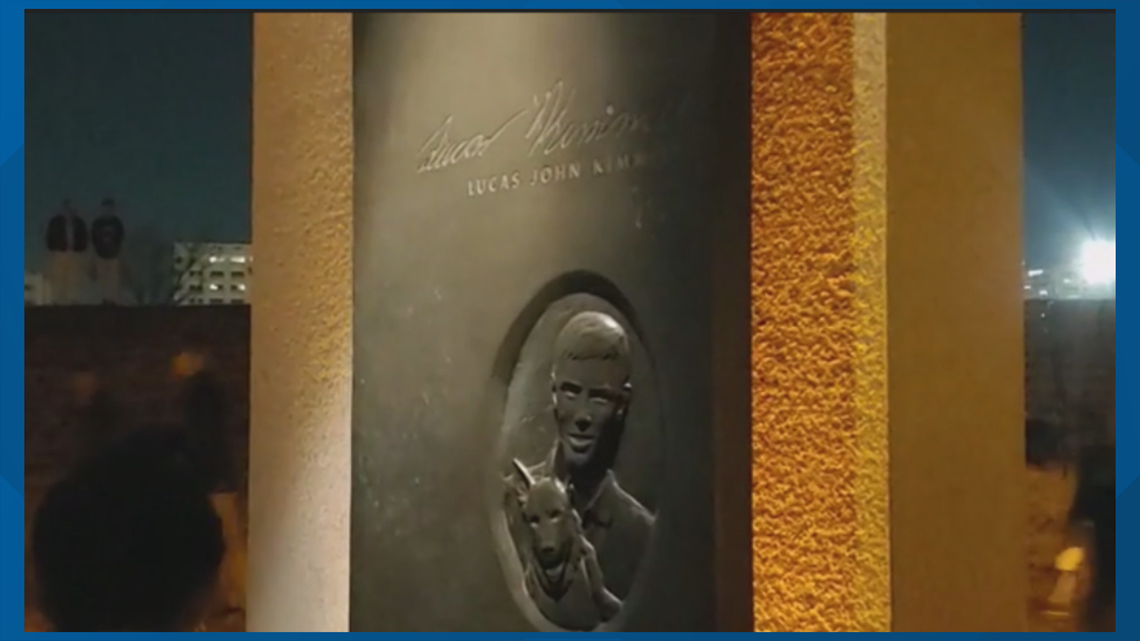 Service was a word said often during the ceremony and Young urged everyone there to continue to serve their community and others to honor those lost that night. He also reminded the crowd of the 27 people who were also hurt when the collapse happened. "Every day, thousands upon thousands of acts of service are performed by Aggies everywhere. That's a service we know. We're serving and we're doing on behalf of those who would have done them if they had been with us still."

Young said the wounds of the collapse and what happened that night have never fully healed, but Aggies continue to move forward by doing what they know best. "In our hearts, in our minds, we know that we serve. That service, day in and day out is our memory. It's our way of honoring, our way of cherishing the memory of those who aren't with us."

After the ceremony concluded, the crowd was invited to walk the spirit ring and stop by each portal. Many people, from young children, current and past students, to many first responders who were on the scene that morning, took time to gaze upon each face and read about their lives.

It's another tradition Texas A&M will continue to pass down, to help new Aggies understand what it means to honor the Spirit of Aggieland, and despite broken hearts over those lost, the family circle won't be broken.

It really is something.