BONFIRE: Stack may have changed, but Aggie tradition carries on

In part 2 of our series on Aggie Bonfire, we talk with builders of past and present, how stack has changed and what it means to be a part of Aggie tradition.
Author: Tristan Lewis (KAGS), Lisa Primrose
Published: 9:55 PM CST November 11, 2019
Updated: 7:39 AM CST November 12, 2019

COLLEGE STATION, Texas — Walking into J. Cody’s BBQ in Bryan is like taking a step back in time. Covered from wall to wall are pictures and memorabilia of Texas A&M University. Take an even closer look, you’ll see a lot of the photographs have to deal with Bonfire.

“I took pictures of Bonfire in the early 90’s for several years," said Cody Whitten, the owner. "It was more of a hobby.”

Whitten got inspiration to decorate with pictures of the Aggie tradition when he opened his restaurant in 2001. He became interested in taking pictures because he helped work on Bonfire when he was in school.

“I thought it would be something fun to document and try and sell," Whitten said.

Whitten's pictures take place over three years, 1992, 1993 and 1994. He said each year, something changes with Bonfire and the execution of the build.

“They’ve started dressing it up over the years and making it more like a wedding cake," Whitten said.

From Bonfire’s earliest inception, it was literally a pile of trash set on fire. Then "stack" as the build is called, was turned into the tee-pee formation with logs. Now, stack is a wedding cake formation that has been redesigned over the years.

The change in the construction, or "stack" of Bonfire has changed over the years. What started out as a pile of trash then turned into a teepee formation on the left of this photo. Eventually, Aggies would adopt the traditional wedding cake formation, as seen on the right. Historians said the formation change came around 1978.
CUSHING MEMORIAL LIBRARY & ARCHIVES, TEXAS A&M UNIVERSITY

“Its hard to say what's changed and what's stayed the same as it evolved over time," Whitten said.

Whitten worked with many people while out helping on stack. Some of those lifelong Aggie friends were there the night of November 18, 1999 when Bonfire collapsed.  He became emotional as he showed pictures of some of those friends whom he had been side by side with only a couple of years previous to the tragedy.

Whitten said he has not been to Bonfire in years..

“The students are keeping the spirit alive and I applaud them for that," Whitten said.

One thing he said he does know is the off-campus group putting on Bonfire today is smaller, but safer.

“We’ve improved upon, made decisions to help and handle any possible problem that could come up in the future," said Ashton Vara, a senior red pot and head stack for 2019 Student Bonfire.

The structure of the current wedding cake style of bonfire was re-engineered for the off-campus group after the 1999 collapse.

BONFIRE: How stack has changed, but the Aggie tradition remains the same 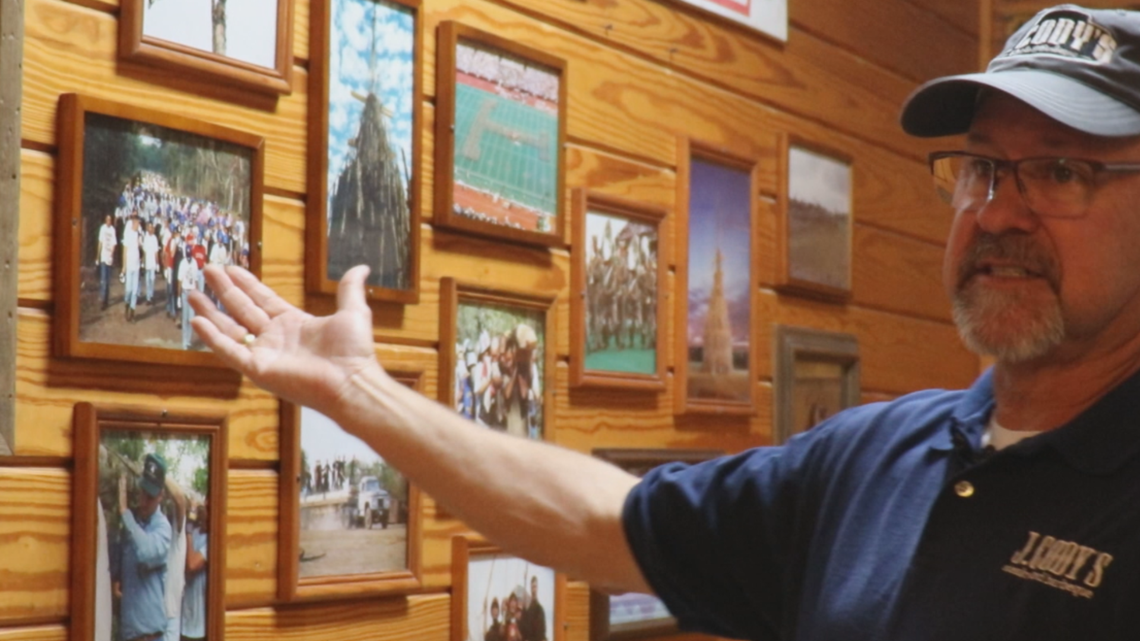 01 / 08
Cody Whitten, owner of J. Cody's BBQ in Bryan, shows off his Bonfire memorabilia and photo collection. Whitten, an A&M graduate, and former Bonfire builder said he is glad the new generation is keeping the Aggie tradition alive.
02 / 08
This Bonfire has been built using the traditional wedding cake formation, which was adopted around 1978.
03 / 08
Ashton Vara, Head Stack of Bonfire '19, explains how Student Bonfire has re-designed stack to be safer. "Every single log that we have touches the ground," Vara said.
04 / 08
Cody Whitten shows pictures he's collected and taken over the years to honor and remember those who worked on Bonfire in both past and present.
05 / 08
Builders work on stack for Bonfire '19. Student Bonfire redesigned the wedding cake formation after the collapse of '99 killed 12 people.
06 / 08
Ashton Vara, Head Stack of Bonfire '19, points out the names on his helmet. The helmet has been passed down through the heads of stack since the 1970's, Vara said.
07 / 08
Another photo from Cody Whitten's personal Bonfire collection shows Aggie stack workers.
08 / 08
Stack worker helmets adorn the rafters of J.Cody's BBQ in Bryan. Cody Whitten built up his Bonfire collection as a way to honor the Aggie tradition both past and present.

“Every single log that we have touches the ground," Vara said. "We still look the same whenever burn comes around but we’re structured totally different.”

One thing the Student Bonfire tries to keep the same is the spirit of the tradition.

“This undying flame that we have as Aggies- it's not burning out anytime soon and we have students out here that are willing to keep that going," Vara said.

PART 1 OF BONFIRE SERIES: BONFIRE: A look back at more than a century of the Aggie tradition