BONFIRE: A look back at more than a century of the Aggie tradition

COLLEGE STATION, Texas — You know the old saying: 'Someone’s trash is another person’s treasure' and when Bonfire came into existence, it’s safe to say a group of Aggies probably never thought their trash would end up becoming a traditional treasure.

According to reports from the Department of Homeland Security, the first dated Bonfire goes all the way back to 1909. It started with a group of Aggies setting fire to a pile of trash to celebrate a football win.

"Then I think at some point they ran out of trash and started trying to make it bigger with logs," said Cody Whitten, the owner of J. Cody's BBQ.

While it took a few years to catch on, the event became known simply as “Bonfire." It was a way to build up a competitive spirit the week of one of the most intense rivalries in Aggie Football – A&M versus the University of Texas Austin.

Bonfire became the symbol of every Aggie’s “burning desire” to beat the school they affectionately call “TU.”

BONFIRE: A look back on a burning, century-old Aggie tradition 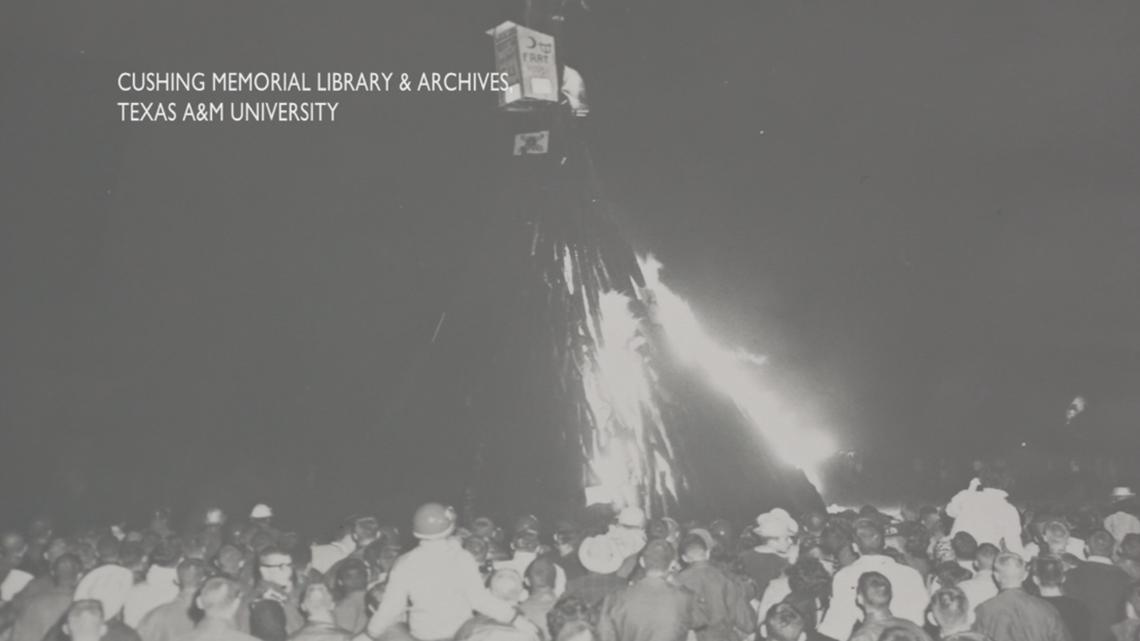 01 / 09
Texas A&M students who built Bonfire would often construct an outhouse similar to that of a University of Texas fraternity. The outhouse would be put at the top of the bonfire.
02 / 09
This construction style of Bonfire was common before the wedding cake formation was adopted.
03 / 09
The burning of Bonfire.
04 / 09
A group of Aggies work to build Bonfire.
05 / 09
Bonfire in the wedding cake formation burns.
06 / 09
A picture that, perhaps, captures the true spirit of Bonfire and the burning Aggie tradition.
07 / 09
Aggie Bonfire builders carry logs at the build site.
08 / 09
09 / 09

The game usually took place the week of Thanksgiving with Bonfire happening the night before the big game.

"Normal stack we light it at 8:30 or 8:45 and it’ll burn well into 2 or 3, then we will have embers all afternoon the next day," said Ashton Vara, a senior red pot and head stack for 2019 Student Bonfire.

Although Bonfire had been going on for years, the earliest dated picture goes back to 1928. Over at Cushing Memorial Library on A&M’s campus, there are hundreds of pictures and items of memorabilia from the more than 110 years of Bonfire tradition.

"It's basically part of our mission to collect the history of the university so that it is here for future people," said Robin Hutchinson, the Cushing Collections curator.

Flipping through photos people can see how Bonfire may have changed physically, but the spirit hasn’t changed a bit.

In just a few decades Bonfire went from 30 feet to 70 feet, with the 1969 Bonfire hitting the Guinness Book of World Records for the largest bonfire in the country at 109 feet, 10 inches. The university limited the stack to 55-feet the following year, citing safety concerns.

Bonfire construction also changed throughout the years, from a pile of debris to a constructed tier of tightly wound logs.  In 1945, the first center pole was used and Bonfire was made entirely out of logs in a tee-pee formation. At the top was an outhouse built in a way to symbolize UT frat houses.

In 1978, the construction transitioned into what is known as the “wedding cake formation.”

Bonfire’s burn and build sites have moved from place to place throughout the years when it was being monitored by A&M.

The building of Bonfire has changed throughout the years, but so have the people behind the construction. For the first 70 recorded Bonfires student workers were all men. It wasn’t until 1979 that women were allowed to help with the build.

"It’s hard to say what's changed and what's stayed the same as it evolved over time," Whiten said.

There have also been some controversies regarding Bonfire, especially on how the construction and burn affects the environment. Some said the cutting down of the trees and how the fire affects air pollution should be a couple of reasons to stop.

Many said they’re not sure if they’re comfortable with Bonfire continuing today, after the deadly collapse in 1999 killed 12 people.

"We care, we remember those people that did lose their lives," Vara said.

After the collapse, Bonfire did not burn for three years, but in 2003 an off-campus organization started a new off-campus Bonfire. They wanted a way to continue “the undying flame of love” for their school and keep the tradition alive.

“We’re not affiliated with the university," Vara said. "All the students you see out here are current A&M students.”

The university may no longer be involved, but as is the way with many traditions, they continue to burn on.