The Show Must Go On: Bryan student in hospital performs at winter concert

Band Directors at Davila Middle School devise plan to help a student in the hospital perform with his school. 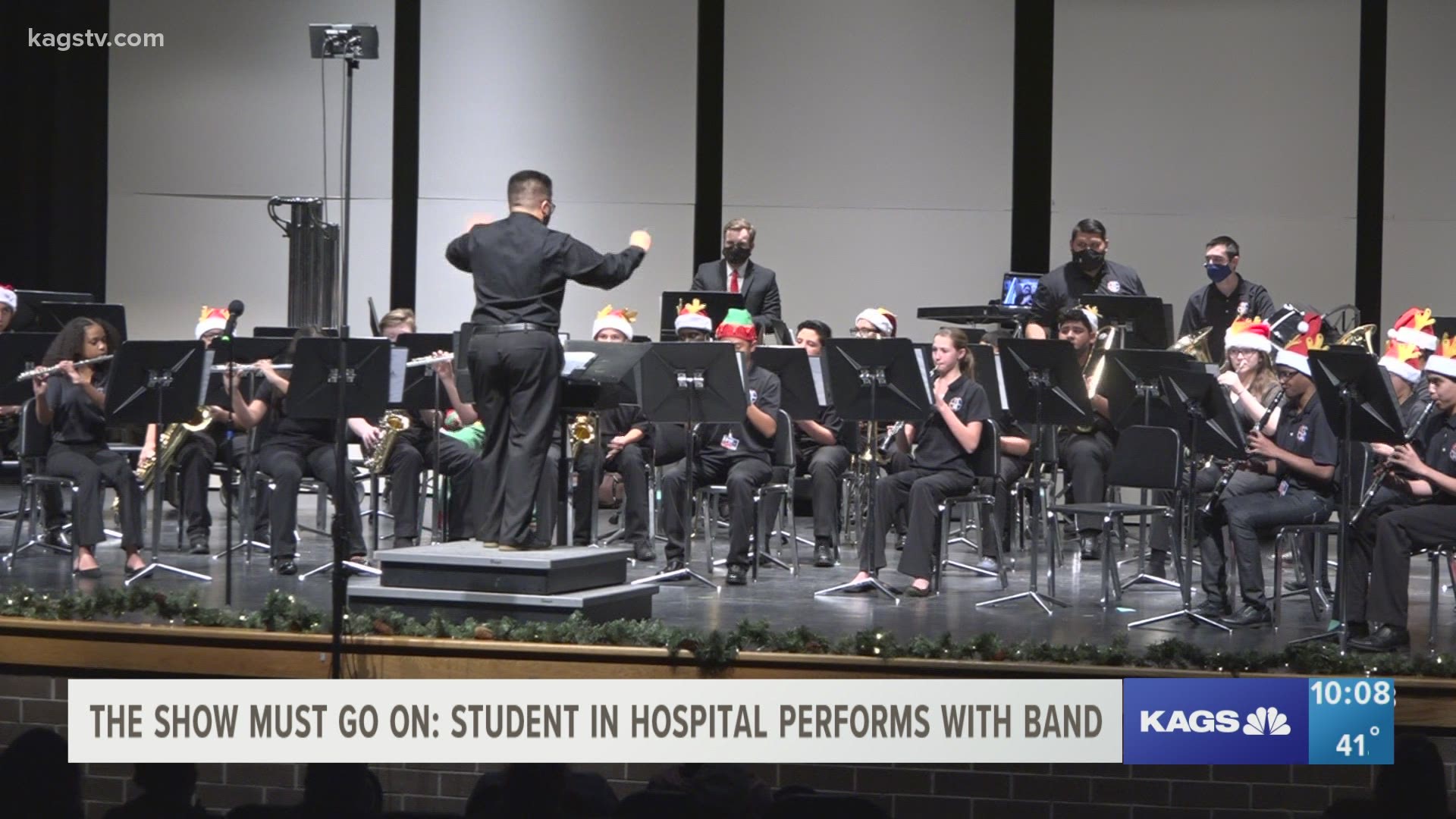 Davila Middle School Symphonic band took to the stage at the PAC Theater Monday night. This is one of only a few performances the band has had all year long because of the situation surrounding COVID-19.

“Just having the opportunity to do a live performance was super special," said Nathaniel McReynolds, the band director at Davila Middle School.

All 35 students in the band were able to be on the stage, even if they weren’t physically there.

“Of course as band directors, we don’t allow anybody not to perform," McReynolds said while laughing. "We came up and devised a plan that makes him still have to be there.”

Ahren Terry is a seventh-grader and percussionist in the band.

“He loves band," said Tashia Terry, Ahren's mother. "He loves the rhythms, the music and he adores his two band directors.”

Ahren was looking forward to this concert. However, just before Thanksgiving, he tested positive for Type B Flu and developed a secondary infection. He was taken to McLane Children's hospital in Temple.

"He ended up with staph [infection] and renal virus in his bloodstream," Tashia Terry said. "Once it hits your bloodstream it goes to every part of your body. It ended up shutting his kidneys completely down, so he was on dialysis for a full week.”

After being put on antibiotics and a few setbacks, Ahren is now progressing in the right direction that doctors believe he should be out of the hospital before Christmas. However, he still wasn’t able to get out before the winter concert.

“He worked really hard to be able to do this and be able to be the percussionist for the group," Tashia Terry said.

But as McReynolds said, Ahren still had to perform. Both McReynolds and the assistant band director, Eric Cadondon, brought out a laptop, set up a Zoom call and put him on that stage. McReynolds even performed Ahren's parts in the song because wasn't able to.

The only things Ahren needed to do was wear his band polo shirt and tap his chest to the rhythms of the song.

“We’re just glad to do everything we can to help, I mean that’s why we're here," McReynolds said. "We’re here to make sure we have opportunities for these students and these scholars.”

"It was such a blessing to have them be instructors for my son and set an amazing example of service and giving to others," said Tashia Terry.