Is Brazos County rolling out the COVID-19 vaccine efficiently?

Brazos County currently has several thousand doses that have not yet been administered. The emergency staff is working on an efficient plan to allocate the vaccines. 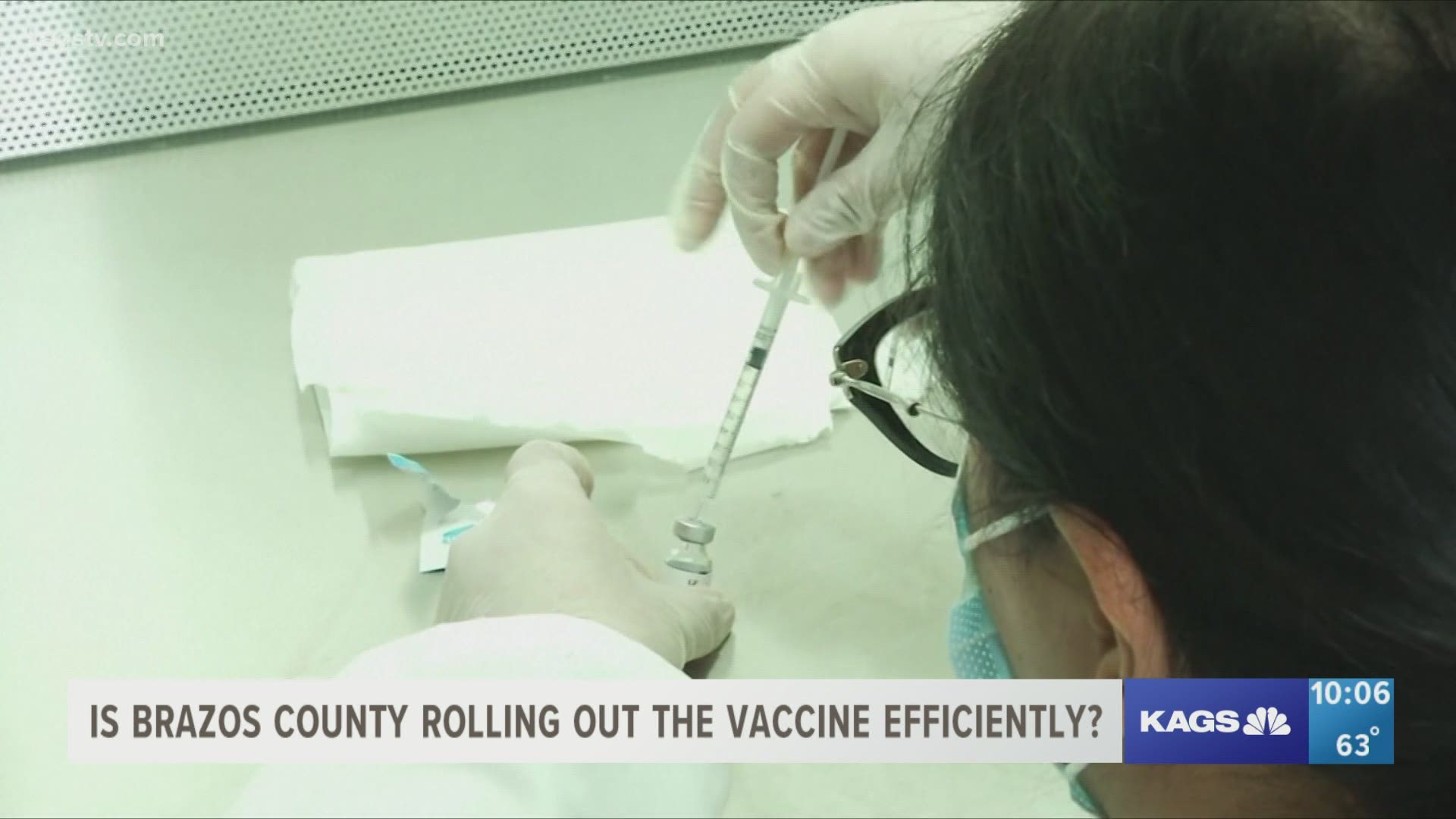 BRAZOS COUNTY, Texas — When will the COVID-19 vaccine be available to the general public? Is Brazos County ready to efficiently vaccinate everyone who wants it? Emergency staff for Brazos County said it is working on plans to roll out the vaccine in a timely and efficient manner.

When it comes to the COVID-19 vaccine, Brazos County health officials said they have vaccinated about 3,000 people in the phase 1A group. But Brazos County currently has several thousand doses that have not yet been administered. Vaccines on the shelf are not happening in all areas in the state, though.

“Some of the areas in the state of Texas are small enough, they’ve already taken care of that 1A population and so they’re moving on to 1B," said Brazos County Emergency Management Coordinator Michele Meade.

The doses on Brazos County shelves are almost enough to cover all in phase 1A, which includes healthcare workers, long-term care facility workers and funeral home workers.

RELATED: Interactive map shows where COVID-19 vaccine has been delivered in Texas

Brazos County Emergency Management and the district 13 TDEM coordinator answered questions in front of the Commissioner's Court Tuesday on why it’s taking so long to get through phase 1A in the county.

Health officials said getting the vaccine is not a short process. It is not simply where you walk in and get the shot and walk out.

“Once someone identifies a provider that can get them a dose, then they need to make an appointment, preferably by phone or the internet, to go in and get that dose," Meade said. "It’s roughly a 30-45 minutes process because they have to do paperwork. They have to get the shot in the arm. Then they actually have to wait approximately 15 minutes after they get the shot in the arm, to make sure that there aren’t any adverse reactions to the shot."

Depending on which manufacturer you get, you will need your second shot after 21 days or 28 days. These vaccines come from the federal government, which allocates them to Texas. Texas then gives those vaccines to providers across the state.

“When allocated to a provider in Texas, in this community, they have one week before they actually get to distribution," said Ponch Gonzales. Gonzales is the TDEM district coordinator for District 13. "The allocation numbers may be at 7,500, but they won’t be arriving until next week. So there's going to be that lag time. Brazos County has been allocated 7500, but they’ve only given 3,000 shots. Well, the other shots may not have arrived yet for distribution."

The emergency staff for Brazos County is already planning for the summer when it expects the vaccine to be available for the public.  But for now, the county is working to move forward from Phase 1A.

“Are we 50% done in 1A? Seventy-five percent done in 1A? We’re thinking we’re 50-75% done in 1A," Gonzales said. "Since this is under emergency use authorization, it’s not mandatory and the employer cannot make it mandatory. So anybody who wants a shot has got a shot."

Once everyone in phase 1A who wants one receives the vaccine, then the county can move on to the next phase. Emergency management says they hope the vaccine will be available to the general public by this summer.