Texas is set to get tens of thousands more doses of Pfizer’s COVID-19 vaccine on Thursday. 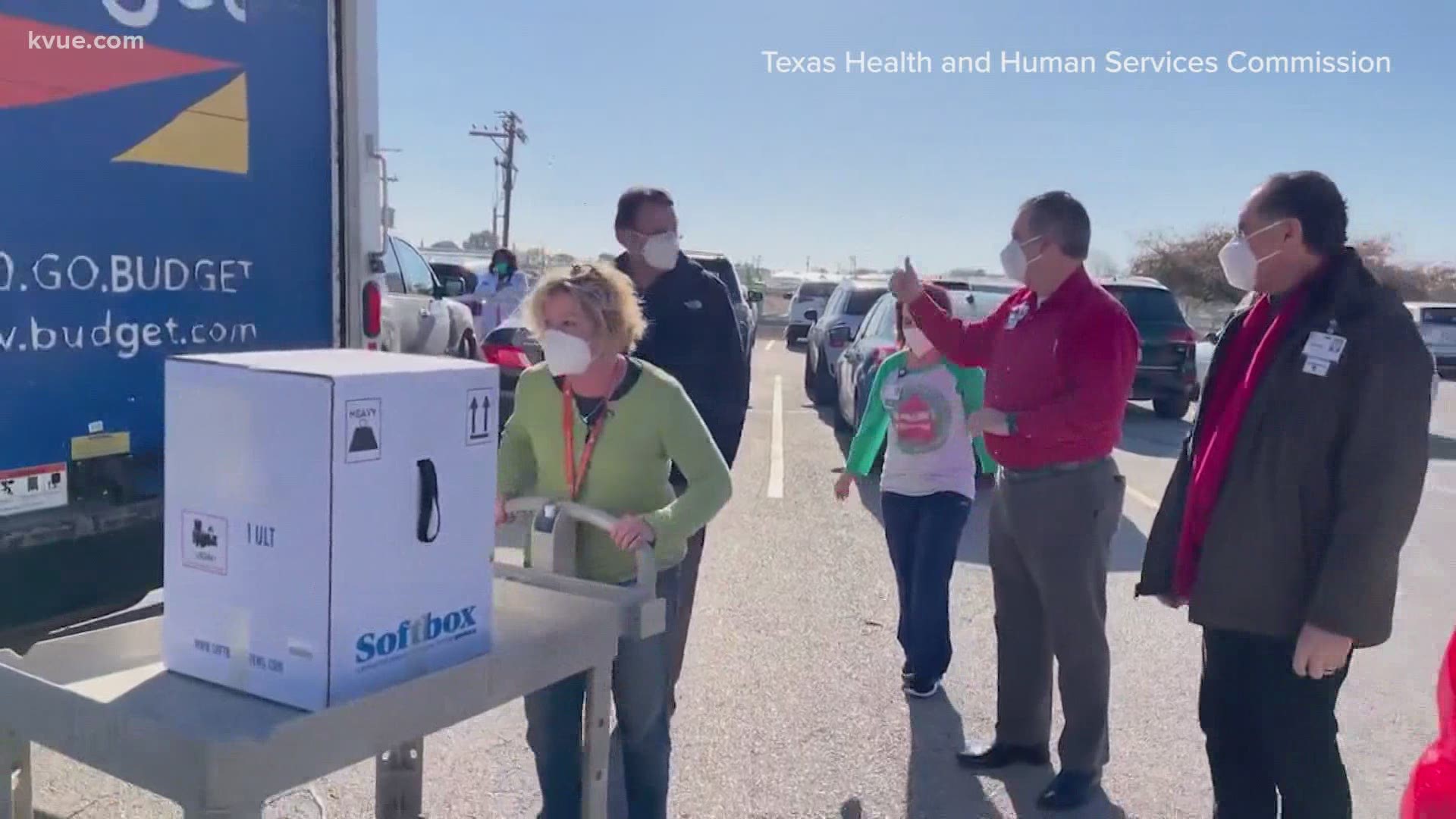 AUSTIN, Texas — Live from the UPS Distribution Center in Austin for what he called an "extraordinary day," Gov. Greg Abbott on Thursday provided an update on the state's vaccine distribution efforts.

Thanks to Operation Warp Speed, which Gov. Abbott called a "monumental medical miracle," he said the state has become a leader in achieving fast distribution of the "transformational medicine." He said more than 7,000 providers across Texas have already signed up and are ready to distribute.

The governor explained that Texas will be getting a weekly allocation of the vaccine every week. UPS will be standing by to make that initial delivery.

He said that before Thursday, 95,000 doses of the vaccine had already been delivered. On Thursday, 129,000 more will be delivered, for a total now of 224,000. With the Moderna vaccine expected by next week, he said the state should be able to have more than a million people vaccinated by the end of the month.

"Right now, the lead recipients of the vaccine are doctors and nurses on the frontline," said Gov. Abbott. "I got to tell you, it was moving, it was heartwarming to see the doctors and nurses who received this vaccine just yesterday or the day before, literally break out in tears as they knew that they were receiving the medication that was going to protect their lives. Everybody owes a debt of gratitude to these doctors and nurses who have been on the frontline for months now. The warriors at the tip of the spear, working around the clock, sacrificing their own lives for the health and safety of their fellow Texans."

Gov. Abbott said Texas is working to vaccinate the most vulnerable Texas residents next, which includes those in nursing homes or others with medical conditions that put them at risk.

The governor also expanded on another important medical treatment outside of the vaccine, which treats those who have already tested positive for the virus.

"We are strongly urging the holders of these vaccines to be more proactive in providing them to patients who need it. They're called antibody therapeutic drugs. One is made by Regeneron, another is made by Eli Lilly," Gov. Abbott said.

The governor said if more providers prescribe these medications instead of allowing them to sit on shelves, more patients would be kept out of hospitals.

"When we started this, we had one tool in our toolbox, and that tool was masks, handwashing, social distancing," said Kidd. "As the governor mentioned, the therapeutics that have been out on the streets now is another tool in the toolbox. We really need to make sure that tool is being utilized."

Though vaccine distribution and the antibodies serve as a "ray of hope" as the nation continues through month nine of the pandemic, Dr. Hellerstedt said they are not yet the answer.

"They will be the answer as time goes on, but what is still the answer is exactly what you're wearing on your face and exactly what we're doing here in terms of distancing ourselves and practicing those non-pharmaceutical interventions that have gotten us this success so far," Hellerstedt said.

The governor also said that government shutdowns as a preventative measure are off the table for the state of Texas.

"One thing that has been clearly apparent, there's been no governmental leader anywhere who has been able to figure out how COVID works," he said. "We've seen these massive shutdowns of businesses in California that have led to an even greater spike in the spread of COVID-19 ... it is time to put behind us shutdowns. No more shutdowns, we need to focus on opening up businesses."

He said it is now an adult's responsibility to follow safe practices.

"If they do that, we can contain COVID-19 while we continue the process of vaccinating our fellow Texans and continue to open up," he said. "People's lives have been crushed. And their pocketbooks and their ability to pay rent and put food on the table have been harmed because of the shutdowns. And so, no, we will not have any more shutdowns in Texas. "

Gov. Abbott also stated that he has not yet received the vaccine himself, but he plans to do so at the "appropriate time" after frontline workers.

Texas will be distributing doses of Pfizer’s COVID-19 vaccine to 87 medical facilities across the state, including 10 in Central Texas, according to the Texas Department of State Health Services.

These are the Central Texas sites expecting deliveries on Thursday:

The shipment schedule for next week is still being determined, a Texas DSHS spokesperson said.

WATCH: Do both doses of the COVID-19 vaccine need to be the same brand?

Will the COVID-19 vaccine interfere with other medications?