McClain, 23, was pronounced dead Aug. 27, 2019 – a few days after he went into cardiac arrest following a struggle with Aurora Police officers. 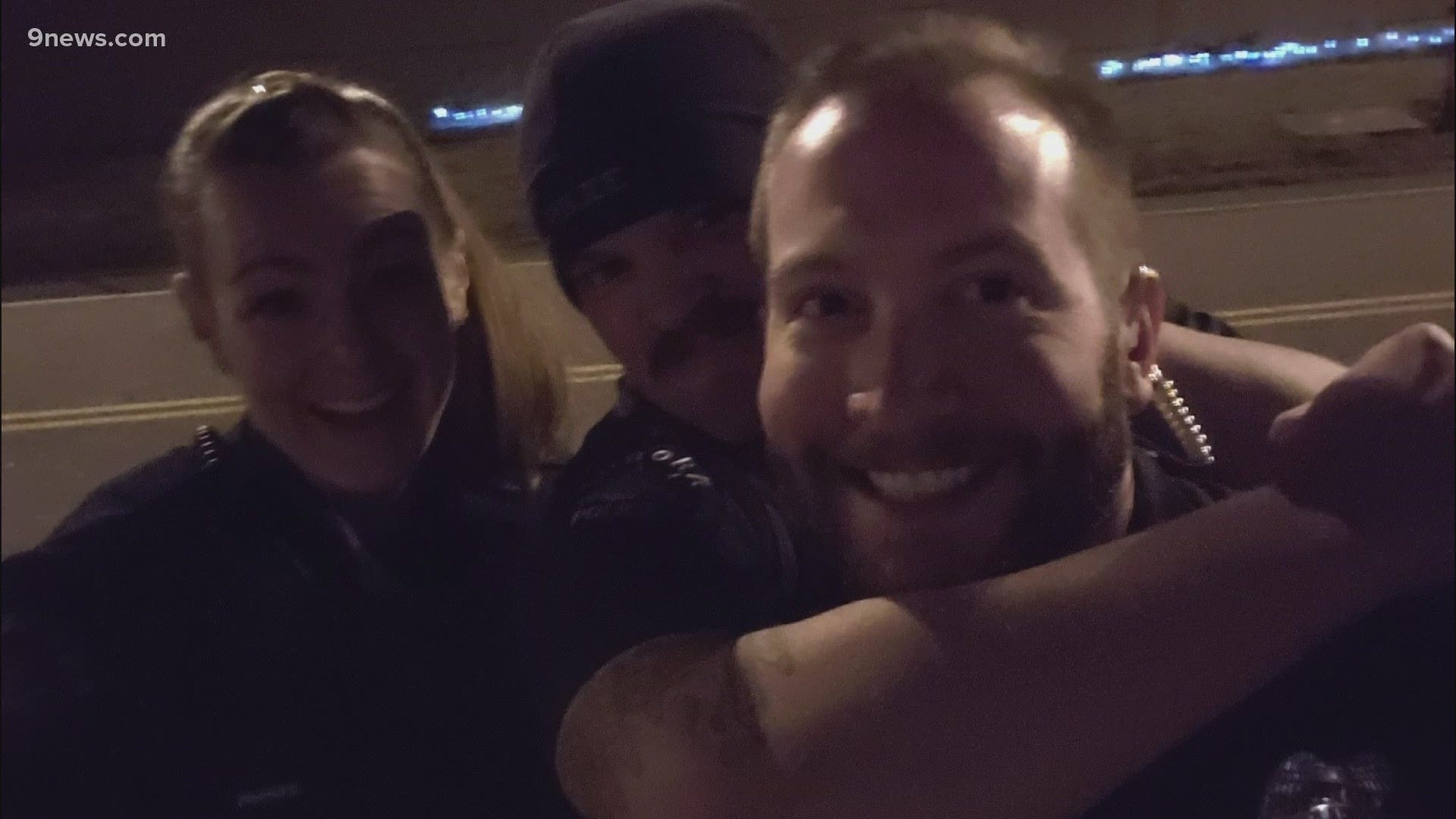 AURORA, Colo. — The Aurora Police Department has fired two of the three officers who took photographs depicting a choke hold in front of the memorial for Elijah McClain, who died after a confrontation with officers in August 2019.

A third officer was fired for his response to the photos that he received in a text message, and another officer involved resigned Thursday, before his punishment could be handed down.

"I speak for all men and women of the Aurora Police Department to say we are ashamed, we are sickened and we are angry about what we have to share with you," Interim APD Chief Vanessa Wilson said at a news conference Friday, where she shared the process of the investigation and the news of the terminations.

"While the allegations of this internal affairs case are not criminal, it is a crime against humanity and decency. To even think about doing such a thing is beyond comprehension," she said. "It shows a lack of morals, values and integrity, and judgment. I can no longer trust to allow them to wear this badge."

Wilson offered an apology to McClain's family, friends and the community over the incident.

RELATED: The death of Elijah McClain: Everything we know so far 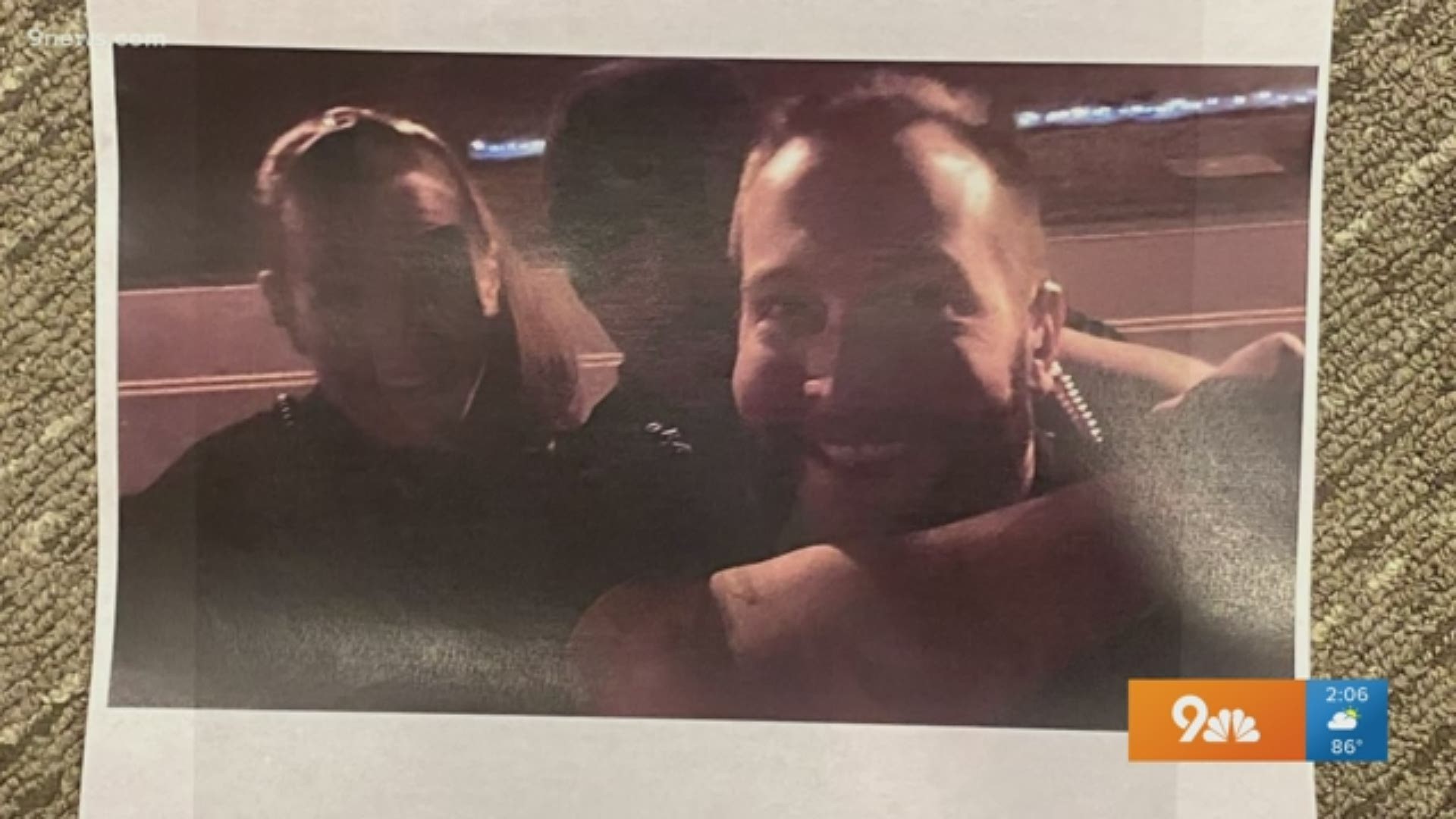 According to documents released by the Aurora Police Department (APD) on Friday, the photos were texted to Officer Jason Rosenblatt, who responded with “HaHa.” Rosenblatt was one of the three officers who responded the night of McClain’s death. Wilson said he was fired for his "utter inability to do the right thing" when he was involved in the incident with McClain.

The officers depicted in the photos were identified by APD as Erica Marrero, Kyle Dittrich and Jaron Jones. Jones resigned from the department Thursday. Wilson said Jones' file shows he was to be terminated.

Marrero and Dittrich both responded to the scene the night of McClain's death, documents show, but arrived after his deadly confrontation with officers. 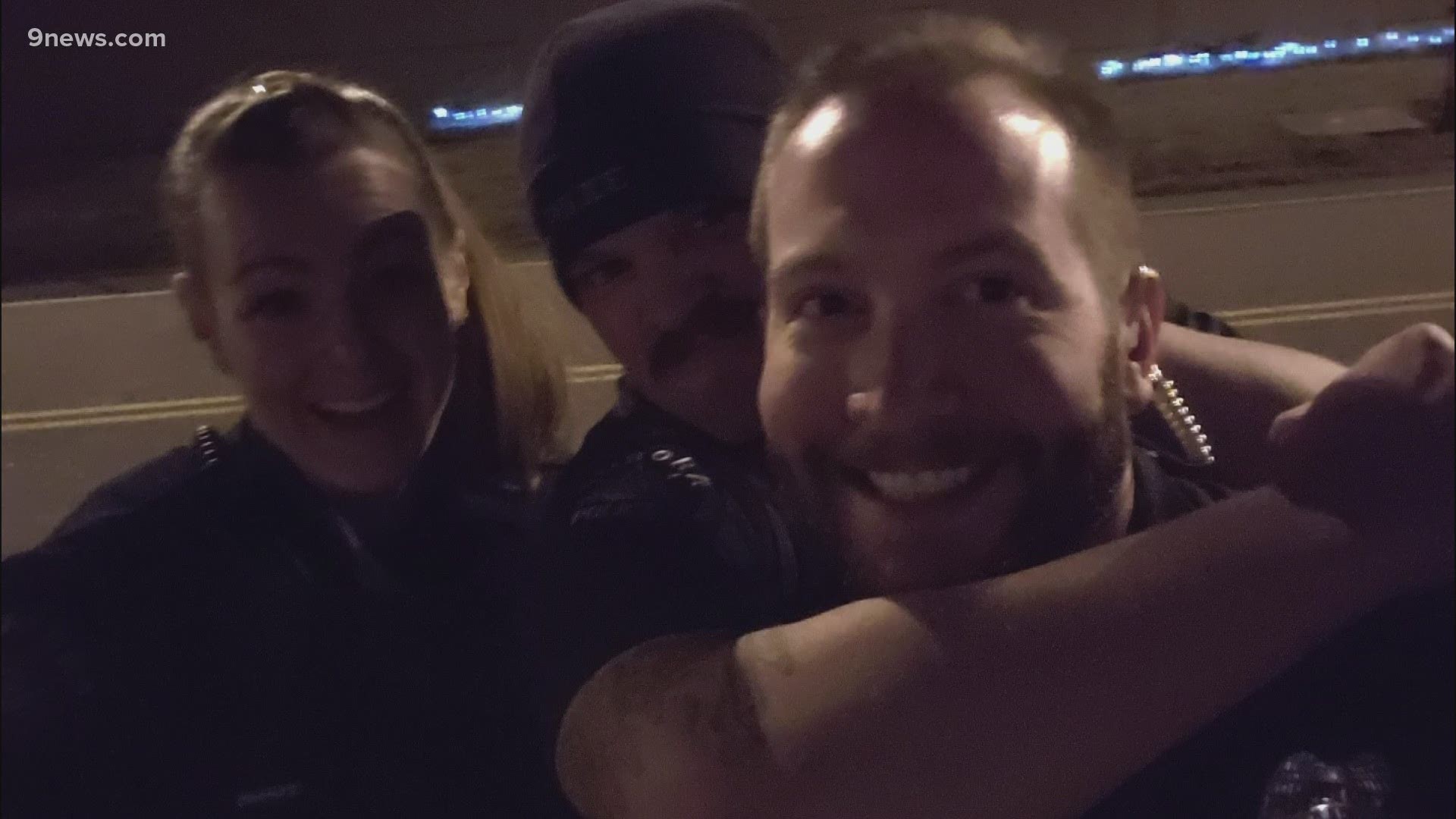 According to APD, the photos were taken Oct. 20, 2019, in the 1700 block of Billings Street. The three officers were on-duty and had just completed a call in the area when they took the photos near McClain’s memorial. Wilson said when questioned, the officers said they took photos to "cheer up a friend."

Below are the two photos released by APD:

The Aurora Police Association said they disagreed with Wilson's decision to fire Rosenblatt, saying it was a rush to judgment and that she made this choice because she was being considered for the permanent chief role.

The association, according to its website, protects officers and their families in contract negotiations with the City of Aurora, offers legal services, insurance benefits and a host of other programs for their members and the Aurora community.

"An official statement from the Aurora Police Association Board of Directors
Today, Interim Aurora Police Chief Vanessa Wilson terminated one of our members in the case related to the photos taken near the Elijah McClain memorial. Though this Officer had no part in the taking or distribution of the photos, and was sent the photos months after they were first taken, he was terminated from his job as an Aurora Police Officer effective immediately.

This internal investigation was conducted in an unprecedented fashion. All of the officers involved were ordered to give interviews on very short notice, without proper preparation, outside of their normal work hours, had their phones confiscated and downloaded, and then were given an abbreviated and defective file review process. All of these steps ordered by Interim Chief Wilson were violations of the officer's due process rights. Against the written policy, Interim Chief Wilson then denied each officer the option for an Internal Review Board.
A standard internal affairs case takes several months. This case took 9 days. This investigation is a rush to judgement.

It appears that Interim Chief Wilson's participation in the chief selection process drove her decision making in this case. The appearance of impropriety is obvious. It is extremely concerning to the Aurora Police Association that Interim Chief Wilson is willing to disregard the rights of our members and due process that is afforded to all police employees.

A police chief manages the entire police department as charged to them by the elected officials at City Hall who are chosen by the community. By her actions today, Interim Chief Wilson has demonstrated that she is unfit for the position that she currently holds and should be dropped from the final slate of candidates to be the next Chief of the Aurora Police Department." 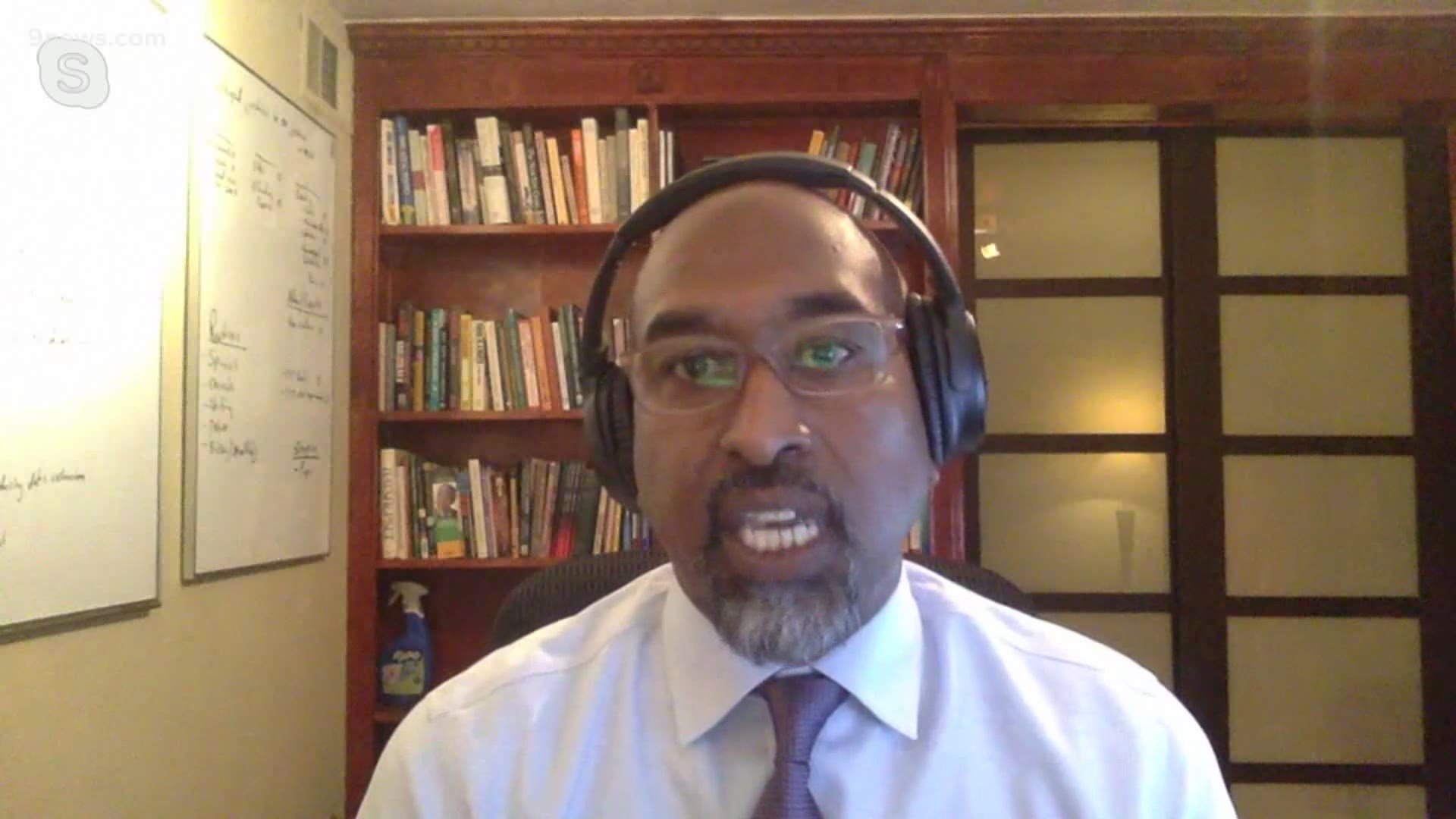 The McClain family held a news conference Friday afternoon following the APD news conference. According to their attorney, the family had already seen the photos.

Wilson said she met with McClain's mom prior to the news conference so she could see the photos "before the world did, which was the right thing to do.”

“Just when you think the Aurora police cannot get any worse, they reach a new low. This is a department with police who tackled an innocent young black man, inflicted fifteen minutes of multiple kinds of excessive force, including two carotid chokeholds, who stood over him joking, 'Don't get that on me' while he was vomiting from the pain, and threatened to sic a dog on him because he wasn't lying still enough while dying. This a department that exonerated all of the officers who killed Elijah McClain and those who failed to intervene to stop the torture. This is a department that spewed pepper spray on peaceful protesters and mourners playing their violins as a tribute to Elijah's life. Now we learn that this is a department where uniformed police officers feel empowered to make a mockery of killing an innocent young black man by returning to the scene of Elijah's murder at the hands of fellow APD officers to take photos of themselves laughingly reenacting the chokehold used to murder Elijah. They then shared their mimicry of Elijah's murder with their fellow APD officers as a department-wide joke. APD’s conduct is no different than that of white supremacists of at the height of the Jim Crow South who snapped smiling pictures of themselves at the scenes of brutal, lethal lynchings of black men, keeping the images of torture as souvenirs or even turning them into postcards to send to friends.”

Who is Elijah McClain?

The August 2019 death of McClain has made international news as Black Lives Matter protesters across the U.S. have called for justice for the 23-year-old.

The officers involved in McClain’s death were not charged with a crime earlier this year, but the Colorado attorney general has been appointed as a special prosecutor, and the Federal Bureau of Investigation (FBI) and Department of Justice (DOJ) were eyeing a federal civil rights investigation.

McClain was wearing a face mask at the time of the incident -- something his family said he did often when it was cold out because he was anemic. The 5-foot-7 and 140-pound massage therapist had been walking to a nearby convenience store to pick up a drink. He had not committed a crime, and the initial 911 caller said he did not think McClain was dangerous. APD responded to the "suspicious person" call and made contact with McClain.

Body camera footage shows the confrontation quickly escalates from officers yelling "stop!" to McClain being thrown on the ground. One of the officers is heard shouting that McClain was reaching for his gun, but body camera footage doesn't definitively show him doing so.

Officers used a now-banned carotid hold to keep McClain restrained. The district attorney said McClain lost consciousness but then regained it and was heard in body camera footage saying "my name is Elijah McClain ... I was just going home." Paramedics administered 500 mg of ketamine to sedate him, and officers were later told he had no pulse in the back of an ambulance and needed CPR.

Chief Wilson on McClain case, photos and state of department

Wilson, during Friday's news conference, said the officers involved in the photo scandal were put on paid leave prior to being terminated because officers can only be placed on unpaid leave if they have been charged with a felony.

When asked about APD's recent issues and what she was doing to fix things, Wilson said, "I can say we've made a lot of mistakes, and I’m continuing to address those mistakes with transparency ..."

She added that by holding people accountable, being honest and transparent about things, and by making sure families are involved before things are leaked to media, she hopes the relationship between the department and the community will improve.

"I’m sure people are angry and would want [the officers in the photos] fired, and I've done that today," she said.

The department was also under fire for its response to protesters last weekend.