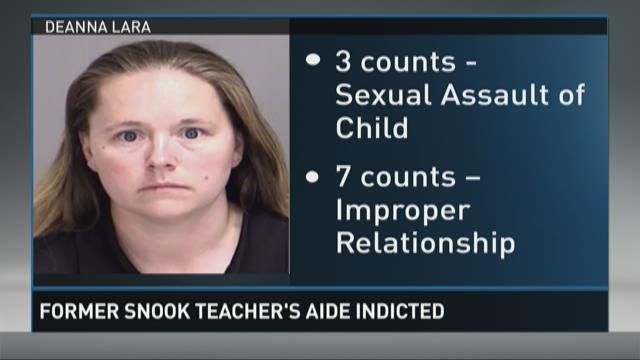 BRYAN, Texas - A former Snook High School teacher's aide has been indicted by a Burleson County Grand Jury for three counts of sexual assault with a child and seven counts of having an improper relationship between an educator and student.

32-year-old Deanna Lara was arrested and booked in the Brazos County Jail for the warrants, and has posted her $110,000 bond.

The Grand Jury's indictment does not mean that Lara is guilty, but that there is enough evidence for the case to go to trial.

Lara is accused of having four sexual encounters with children under the age of 17 in late October and early November 2015.

She was originally arrested in December by Burleson County Sheriff's Deputies for two counts of improper relationship with a child, but more counts were recently added.

Lara resigned from her position at the school in December.

A court date has not been set.