BRYAN, Texas — Services for the family killed in a plane crash at Coulter Airfield in Bryan have been set.

The visitation will be Friday, September 4 from 5 - 8 pm at Charles W. Smith Funeral Home in Lavon, Texas. Services will be Saturday, Sept. 5 at Lavon Assembly of God Church beginning at 11 am. There is also a plan for a Livestream event of the funeral as well to allow anyone to come and support the family.

There will also be a graveside service following the funeral at Lakeview cemetery. You are asked to bring bubbles to the graveside service. Victoria, the 21-year-old killed in the crash, had a deep love for Texas A&M sports, according to her sister, Madelyn. Bubbles are a tradition at baseball games.

Madeline Walker
My parents and sister's service details are listed in the graphic below. We would love for anyone who wants to celebrate their lives to join us. Victoria loved Texas A&M sports, and one of the...

How You Can Help

The local chapter of Tau Kappa Epsilon at Texas A&M University is raising money for a Texas woman who lost her family in a plane crash in Bryan.

President Chase Maderious set up the GoFundMe account, hoping to rally Aggies worldwide for Madeline Walker. Madeline's sister, Victoria Walker, and her mother and father, Tamara and David Walker, died August 30 when the Piper PA24-250 single-engine plane they were in crashed at the end of the south runway.

A fourth passenger, Luke Armstrong, was also in that crash. He remains in critical condition.

We intend to raise funds for funeral services, memorials, and any other needs for Victoria's sister, Madeline Walker, the GoFundMe stated. Madeline is our family through Victoria and we want to do everything possible to support her in this tragic time. 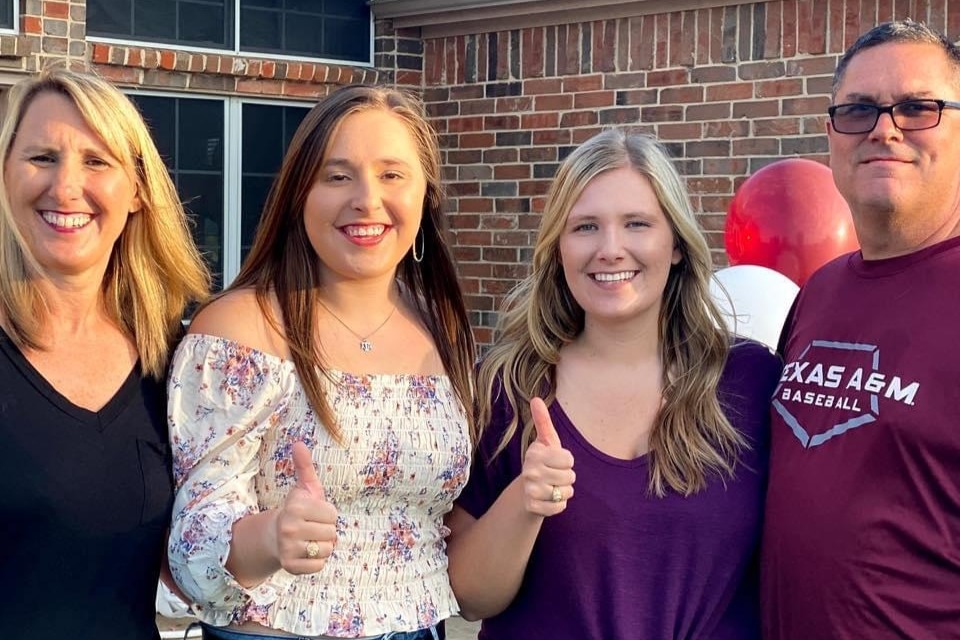 Fundraiser for Madeline Walker, organized by Chase Maderious
Howdy,On Sunday, August 30th, a tragic plane crash took the lives of Victoria Walker, her parents, and critically injured Luke Armstrong, Victoria's longtime boyfriend. Victoria was a Sweetheart of Tau Kappa Epsilon at Texas A&M University and her boyfriend Luke is an officer of TKE. They are our family.

Victoria was a Sweetheart of Tau Kappa Epsilon at Texas A&M. Luke, her long-time boyfriend, is an officer of TKE, according to the GoFundMe. Maderious stated he is hoping to gather all Tau Kappa Epsilon members worldwide as well as all Aggies to help Madeline lay her family to rest.

The GoFundMe page is also giving updates on Luke Armstrong. Maderious said Luke was able to give his family "two thumbs up." He continues to be in critical care and will need more surgery. The local TKE chapter is asking for prayers for Luke's recovery.

According to Luke's sister, Mackenzie, he was able to respond to his mother by squeezing her hand three times. At this time, he is breathing on his own and is expected to have surgery Thursday night. If you would like to follow his recovery, you can join the Team Luke Armstrong & His Road to Recovery Page.

The NTSB an the FAA have not released any further information on the crash. Their preliminary report is expected to be released the week of September 7, but it could take longer.

We will continue to update this story as it develops.