HAMPTON, Va. — Bryan Skipworth was in 8th Grade in upstate New York the day planes flew into the World Trade Center and the Pentagon, when passengers on a third plane brought it down in Pennsylvania.

Eighteen years later, you find him running with an American flag in Hampton.

"Just brings people together," Skipworth said. "That's the reason did it."

For Skipworth, the tribute to people who died on September 11, 2001 is a longstanding one.

A few years after the terrorist attacks, he became a volunteer firefighter in his hometown of Baldwinsville, N.Y., following in the footsteps of his brother. Skipworth's dad worked in public safety.

By 2011, he started his honor run which took him to fire stations in upstate New York. The following year, he deployed as an Army reservist, and other people took up the run while he was gone.

Then, Skipworth landed in Hampton Roads where he continued his tribute, running with an American flag. The member of the Virginia National Guard included military installations in his routes including Naval Station Norfolk and Joint Expeditionary Base Little Creek-Fort Story. While he served as a deputy with the  Newport News Sheriff's Office, he carried the flag from Downtown Newport News to Fire Station 10 near Christopher Newport University.

Now an officer with the Department of Veterans Affairs Police, his run this year found him leaving the LaSalle Avenue Gate of Langley Air Force Base, snaking through the streets of Hampton, and ending at the Hampton VA Medical Center.

"Brings people out," noted Skipworth, who had some of those people stop him along the way.

After reaching the medical center, he and others watched as someone hoisted the flag to the top of a pole along the water. As the Stars and Stripes moved, Skipworth's final part of the tribute was a salute.

"Being from New York and an emergency service family, it hit very close to home. I wanted to remember and to show that emergency service and military are still out there fighting that fight," Skipworth said. "I also see it from that other side because my wife is active duty and is currently away and it’s my son and I on the home front." 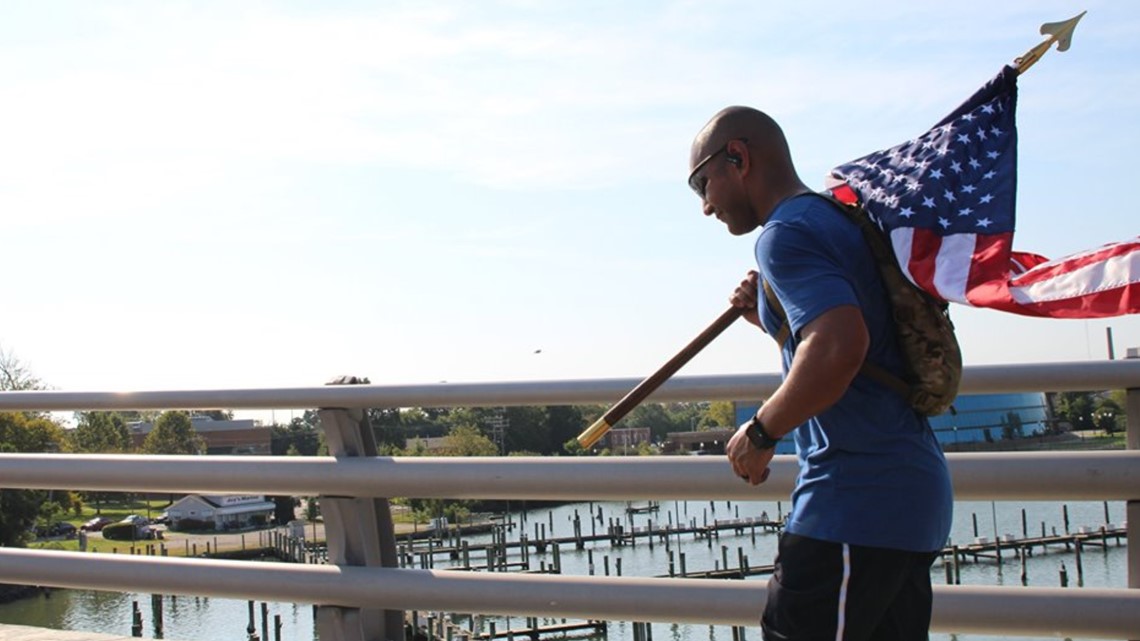