Authorities said there is a long way to go in the investigation and the final report could take six months to a year. 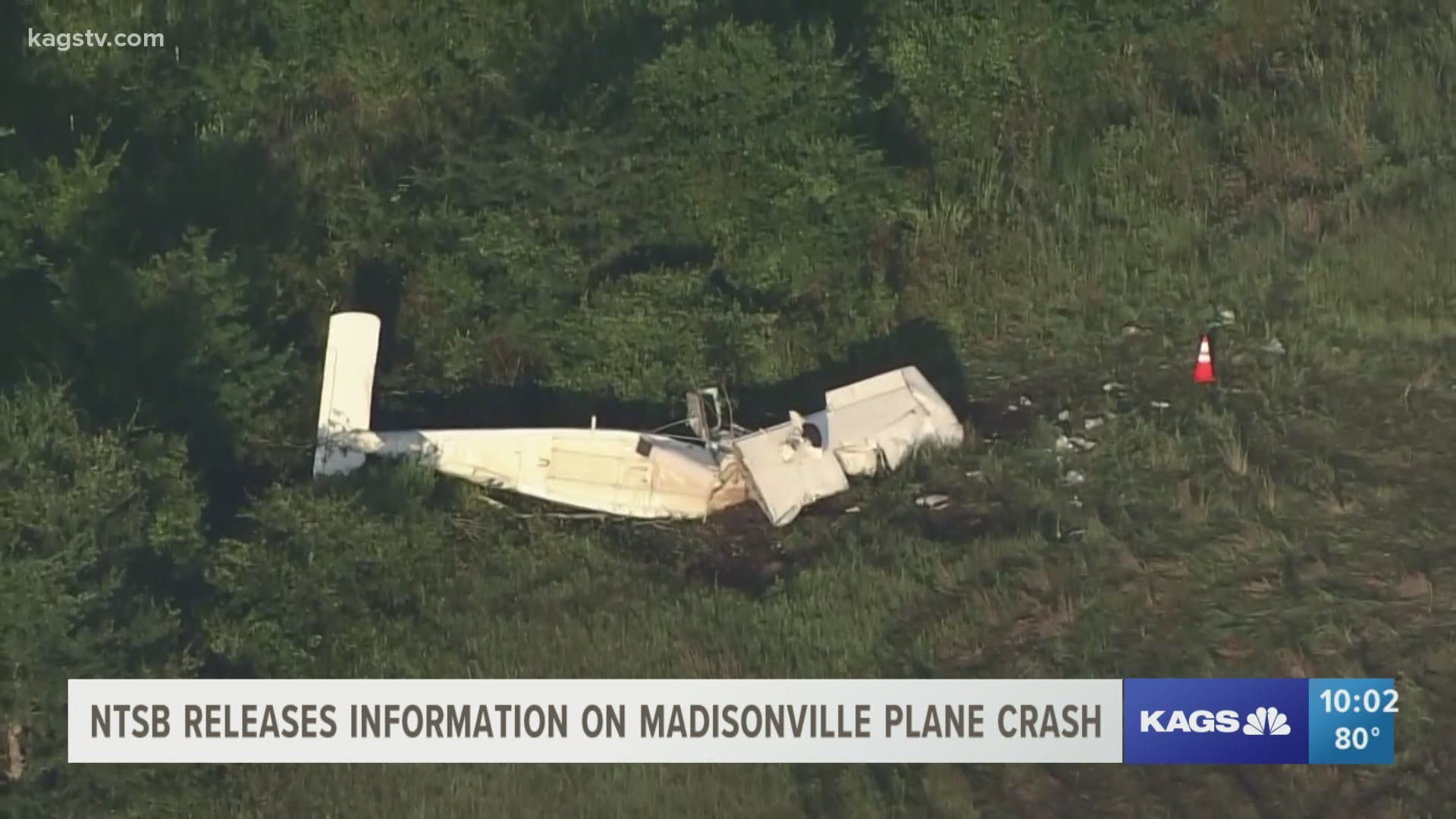 MADISONVILLE, Texas — The NTSB is releasing more information on a plane crash that happened Monday in Madisonville.

The pilot, Apolo Diaz, 68, of Kansas City, died in the crash. Five others were taken to hospitals in Bryan, College Station, Temple and Houston. Their last known conditions were critical, according to Texas DPS Public Information Officer, Justin Ruiz.

NTSB Investigator John Brannen said the agency has finished its preliminary investigation and that at this time, there aren't any clear indications of a mechanical issue with the plane. He determined that by investigating the wreckage and checking to see if there was anything that indicated something was out of place prior to the crash. However, the investigation is far from over.

"We have to look into the pilot's background," Brannen said. "Our investigations generally take six months to one year to get the final report."

The NTSB is giving an update on the plane crash in Madisonville. The pilot was killed and five people were critically injured when the plane crashed just short of the runway Monday. The NTSB said it has finished its preliminary investigation. Press conference to start at 4 p.m. Read More: https://www.kagstv.com/article/news/local/ntsb-investigating-plane-crash-madisonville/499-0cada43f-87a7-4a23-bcb1-84fbd145552e

Brannon said south of the runway, the plane did hit some trees before crashing on the airport property. At this time, it is not known why Diaz may have hit the trees. Air traffic control was not in contact with Diaz, but also is not required to be, Brannen said.

The plane, a Piper PA-32-260 Cherokee Six, was scheduled to land at 11:55 p.m. Sunday at Madisonville Municipal Airport, according to the flight plan. The plane left Port Isabel Cameron County Airport in Port Isabel, Texas just before 9:30 p.m. Sunday.

In the preliminary report, no technical problems were stemming from the plane

The plane had flown to several locations throughout the day, including flying from Mosby, Missouri, to Wills Point, Texas, then Kingsville, Alice and finally, Port Isabel.

Brannen said the on-scene wreckage investigation included documentation of the airport environment, where the plane landed, an inspection of the engine and cockpit instruments. He said his investigation showed the flaps were extended into their landing positions and it appeared Diaz was attempting to land the plane.

The investigation will@now head into their second phase which will cover pilot’s history. @KAGSnews @6NewsCTX @KHOU

Chief Tom Jones, who is with the Madisonville Volunteer Fire Department, said crews were able to rescue the victims within two hours of the crash. He said while the rescue took time, there were no difficulties to note that came up during the rescue. Officials were not able to update on patient conditions at this time.

Brannen said it appeared the five passengers were wearing their seat belts at the time of the crash. However, Diaz may not have been wearing his. "There is a question there. The buckle for the seat belt was unbuckled. The belts did not appear to be stretched."

Here at Madisonville City Hall waiting to hear from more from the NTSB on the plane crash that killed the pilot and left the five passengers on board critically injured Monday around 1 a.m.

Stay updated with me and @JacobReyesDFW right here on Twitter and on @KAGSnews tonight. pic.twitter.com/9cVJ6wE43u

Brannen said the lights at the airport were set to be on from dusk until dawn and they were working at the time of the crash. Airport officials said to their knowledge, there had not been a plane crash at that airport in recent history.

Brannen said there is a long road of investigation ahead and the final report will be issued within six months to a year.

The Madisonville Municipal Airport has been closed since the crash. Airport officials said they will determine by 8 a.m. Wednesday if it will reopen.