One year after plane crash, Aggie senior looks ahead

Luke Armstrong, the lone survivor from the tragedy, is still recovering as he readies for classes 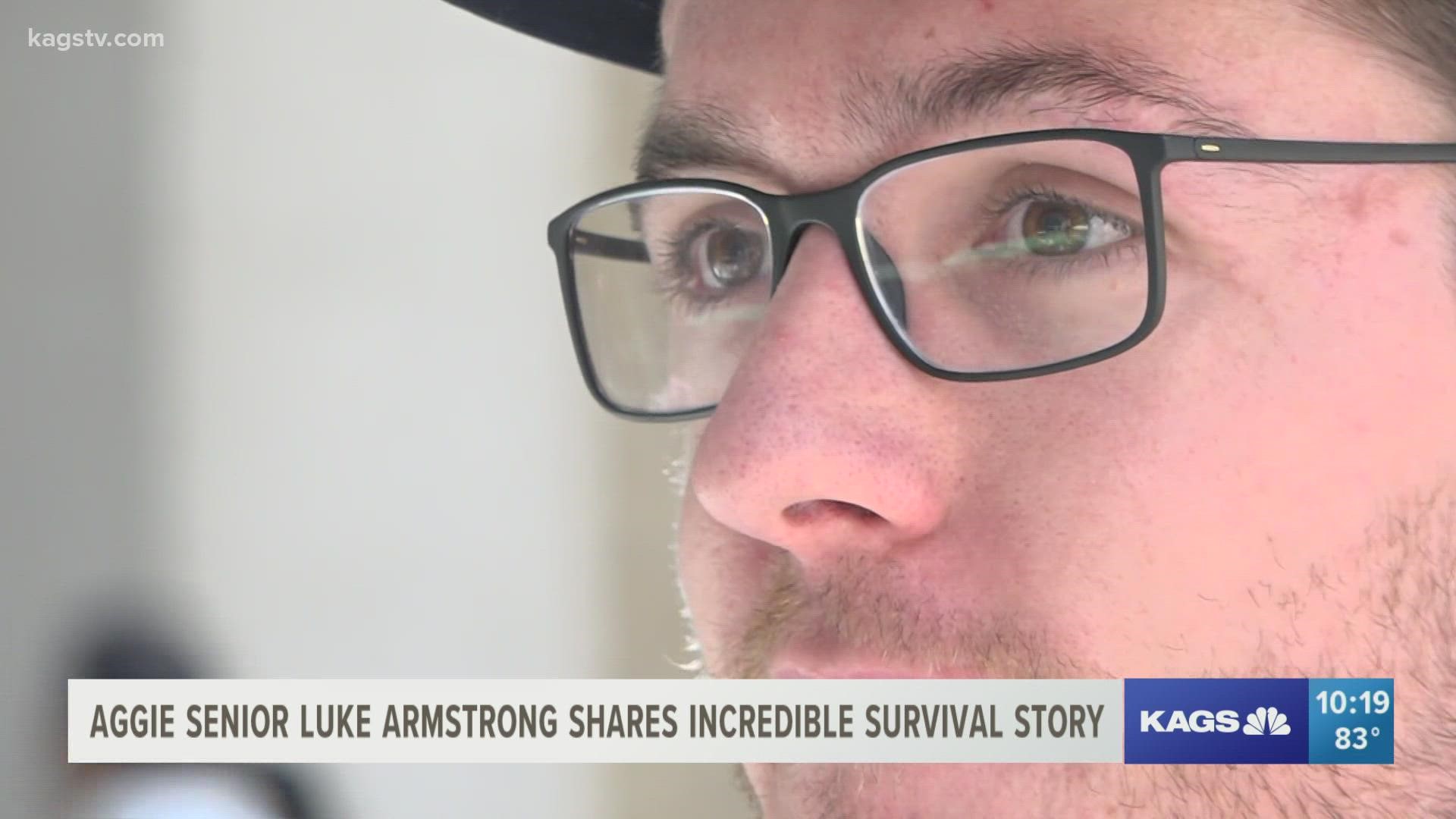 COLLEGE STATION, Texas — Monday was the first day of fall classes for students at Texas A&M. Between the first day jitters, searching for classes and getting in the stride of things, it's easy for Aggies to blend into the crowd.

But, for one Aggie, August 30 means much more than just the first day of class. It's a look back on just how far he has come.

The first day of class makes a college campus buzz with excitement. Many of the students are taking the first steps towards their future; excited, a bit nervous to start on an adventure away from the comforts of home.

The campus of Texas A&M is no different. Students blending in with one another, sharing stories of who they are and where they come from. For senior Luke Armstrong, he's no stranger to first days.

But, this day holds a significant meaning.

"My parents, you know, first day of school today and I've already talked to both of them on the phone," Armstrong said. "They're having a lot of problems too. The way I like to explain it: they relived the last 22 years of my life in my 23rd year."

Twenty-two years in just one year.

Let's go back on year ago to August 30, 2021. It was a sunny, clear day. Armstrong was with his girlfriend and fellow Aggie, Victoria Walker and her parents, Tamara and David.

David, an experienced pilot, had just bought a Piper PA24-250 single engine plane and wanted to take the group up for a birds-eye view of Aggieland. Moments after takeoff, the plane crashed at the end of the south runway.

Victoria and her parents died, leaving Armstrong in critical condition. He's been carrying the title of 'Lone Survivor' ever since, a heavy title to carry at times.

It was a long road back. Armstrong had to bring himself back from the edge more than once. He worked hard to regain the things many of us take for granted every day. During recovery, Armstrong spent his time questioning the crash.

“Why did this happen to me, but there were four people in the plane so why was I the only one?” he said out loud.

It wasn't just about the physical healing. He had to work hard to discover a new him. “I was grieving the loss of Victoria and her parents; at the same time, I was grieving what I perceived as a loss to myself,” he said.

It was hard work, but he had his family, Victoria's family and all of Aggieland supporting him. He worked to get back to a sense of normalcy.

“Prior to the plane crash I was pretty much like any other college kid," Armstrong said. "I was a Construction Science major, still am.”

He worked to get back to campus, just like any other student, learning in the classroom and working with his peers.

“Through rigorous therapy and a lot of help from nurses and doctors, I’m back to where I was, I’m normal again.”

Twenty-two years in just one year. It was a way for Armstrong and his family to move forward, understanding the road to recovery isn't over and there are still so many unknowns.

"It's not over," Armstrong said. "That'll be a lifelong journey of questioning and wondering.

As Armstrong walks the campus at Texas A&M, he knows there are a log of students who have their own stories. Ones of struggles and triumph, but, all are moving forward one step at a time.

Armstrong says he will graduate at the end of the fall semester.