The couple's 7-year-old daughter was not allowed into school because she was not wearing a mask. 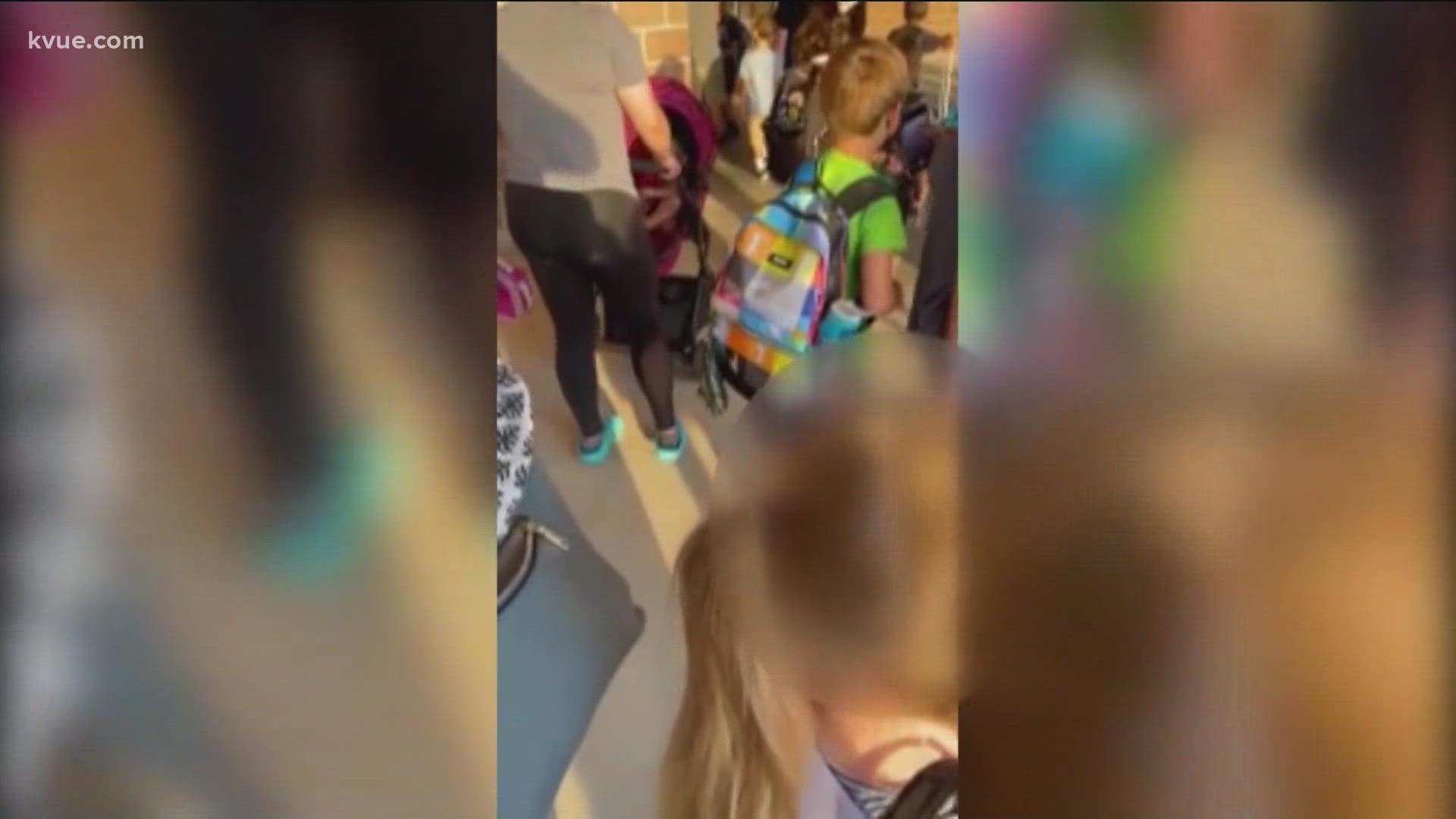 AUSTIN, Texas — On the first day of classes for the Austin Independent School District, a couple challenged the district's mask mandate.

The parents of a 7-year-old second-grader at Cowan Elementary School in South Austin tried to get an administrator to allow her in without a mask on Monday, saying the district is breaking the law by not following Gov. Greg Abbott's executive order that bans mask orders.

Currently, Austin-Travis County's mask mandate for schools remains in place after a district court judge issued two orders on Aug. 15 that temporarily prohibit the governor from enforcing his order. The issue is likely to be heard by the Texas Supreme Court.

The couple recorded the interaction on a cellphone and shared it with KVUE. The parents asked us not to use their real names in fear of retaliation.

The amateur video showed the mother holding "Lisa's" hand as both approached the doors at Cowan Elementary. A school administrator greeted the little girl by name and noticed the family members not wearing masks. He asked the second-grader to put one on.

Her mother said, "This is the law from Gov. Abbott. We're going to follow that."

The parents continued to cite Gov. Abbott's ban on mask mandates. At this point, the school official bent down and directly addressed the girl, saying, "Good morning 'Lisa,' we're really excited to have you here today. So if you want to come on in, come on in, and when you do, we do have masks for you."

The back-and-forth continued, with the father insisting his daughter would not wear a mask.

The administrator responded, "So, you have that option. But any student that comes in our campus is required to wear a mask."

"Not according to the governor," the father replied. "AISD means nothing. This is the governor and the Supreme Court of Texas."

"We're here to welcome our students in," said the administrator.

"Right, but if you're not going to welcome her in ..." the father began to say.

"We're going to welcome her in but we will give her a mask," the administrator replied.

"She's not going to wear it," her father said.

The family made their choice and is prepared to make even more.

"As a parent, it is my decision to not have my daughter wear a mask," the father told KVUE. "And if that can't be my decision, then we'll do what we have to do legally to make it right."

"We understand that people feel really strongly about masks. At the same time, we know that this is the best choice for our community right now. That's what the doctors tell us. That's what we know from our experience. Last year, we had lower transmission in our schools and in the community as a whole, and we had that because we had universal masking, so we know what works. We're always going to be monitoring the legalities of what we're doing. Right now, we are legally able to have a massive mandate, and what we're really going to focus on is the education."

The father said this has not been an easy choice and the decision has been hard on the entire family.

"I probably slept about 25 minutes total last night trying to figure this out in my brain. My wife is so anxious and anxiety-ridden that she doesn't even want to be on this because she doesn't want her face exposed. And, you know, I can't be a sheep going to the slaughter like everybody else. I'm not going to stand in line and obey just because the ISD says that's what I need to do. The law states otherwise, and I'm here to do what's right by my daughter," the father said.

The parents said in the end, it's about their rights to make the best decisions for their family. They said they want AISD to follow state law, which they hope will trump any local ordinance.

Late Tuesday, the couple said they don't plan to return their daughter to school.