This year, the STAAR tests are being administered this year on paper, online or a combination of the two. 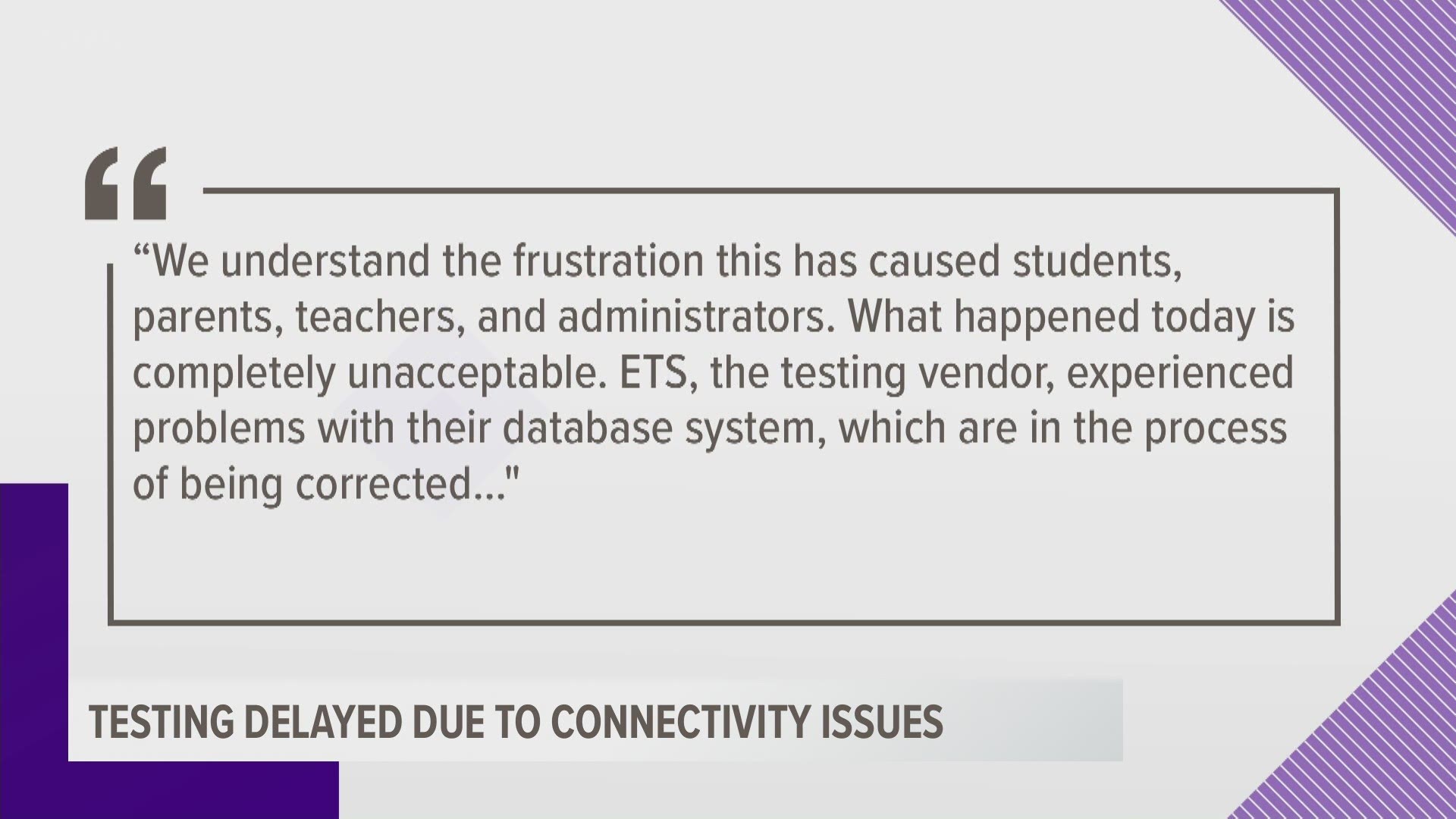 AUSTIN, Texas — Schools across the state are experiencing issues with the online STAAR test.

This year, STAAR tests are being administered on paper, online or a combination of the two. A statewide outage with the Education Testing System (ETS), the company that administers the STAAR test, has affected thousands of students.

The Texas Education Agency (TEA) released the following statement to CBS19 regarding the outage:

“Earlier today, districts experienced connectivity issues with the STAAR Online Testing Platform (SOTP). We posted updates to the STAAR Assessment Management System dashboard every 10 minutes to keep districts apprised of the progress in resolving the issue.

The three STAAR tests affected were Grade 4 writing, Grade 7 writing, and English I. This was the first of five days that students were eligible to take one of these three tests online.

At 10:17 a.m. CDT today, districts were advised if they were having issues that they should stop online testing for the day while the vendor works to resolve these problems. Online testing will resume tomorrow.

We are still analyzing data to determine the number of students affected. Students could have experienced four different scenarios with online testing today:

We understand the frustration this has caused students, parents, teachers, and administrators. What happened today is completely unacceptable. ETS, the testing vendor, experienced problems with their database system, which are in the process of being corrected. The 2021 online administration of STAAR will be ETS’s last for the State of Texas. Beginning next school year, Cambium Assessment will be taking over these critical testing functions to ensure that users have a seamless online testing experience moving forward.

All involved in public education in Texas should expect better than what they have experienced today; we are working to ensure that our students do not experience future testing issues.”

Chapel Hill ISD, Whitehouse ISD and Nacogdoches ISD says they have students taking the online STAAR test and are dealing with issues.

"The majority of our almost all the students affected were high school age students at Nacogdoches High School and at Malcolm Rector Technical High School here in the district," Les Linebarger, executive communications officer at Nacogdoches ISD said. "Roughly 400 [students] we're taking the English one exam."

Nacogdoches ISD says students can expect another day of testing on Wednesday to complete the test.

"I know our teachers and our staff that are helping administer the test in the classrooms will do their level best to try to make it as relaxed and atmosphere as possible when the students reconvene there tomorrow to hopefully go through and finish up the English one exam with no interruptions,"Linebarger, said.

Tyler ISD and Longview ISD have no students taking the test online.

Unfortunately, the Texas Education Agency (TEA) does not allow students to switch testing methods once they have begun the test.

CISD 4th, 7th, & CHS English 1 students have been affected by the state-wide outage of the Education Testing System (ETS), which administers the
STAAR test. According to ETS, “We are still investigating the reports of issues with the STAAR Online Testing Platform...

Well Pirates and Parents, the state's STAAR testing portal for online tests has malfunctioned. We are postponing the English 1 EOC test until the problem is resolved. (Hopefully tomorrow. ) https://t.co/Sd58MSQuLw

"Here we go again. Even in normal years, the STAAR testing regime is a waste of classroom time and taxpayer dollars. During a pandemic, it is absurd to require students to take a test that doesn’t count and won’t accurately measure the learning loss that state officials claim it will.

Throughout the state, many students who have been learning virtually from home all school year to protect themselves and their families from COVID-19 trudged back to campuses today to take the STAAR only to encounter online glitches in its administration.

Now, many of them will have to return to campuses to try again. This is absurd, risky for the children and their families and another reason to cancel testing this year."

This is a developing story and CBS19 will update this article as more information becomes available.