Julia Patterson will advocate for an expansion on Texas’ Compassionate Use Program (CUP) with KK125 Ovarian Cancer Research Foundation. 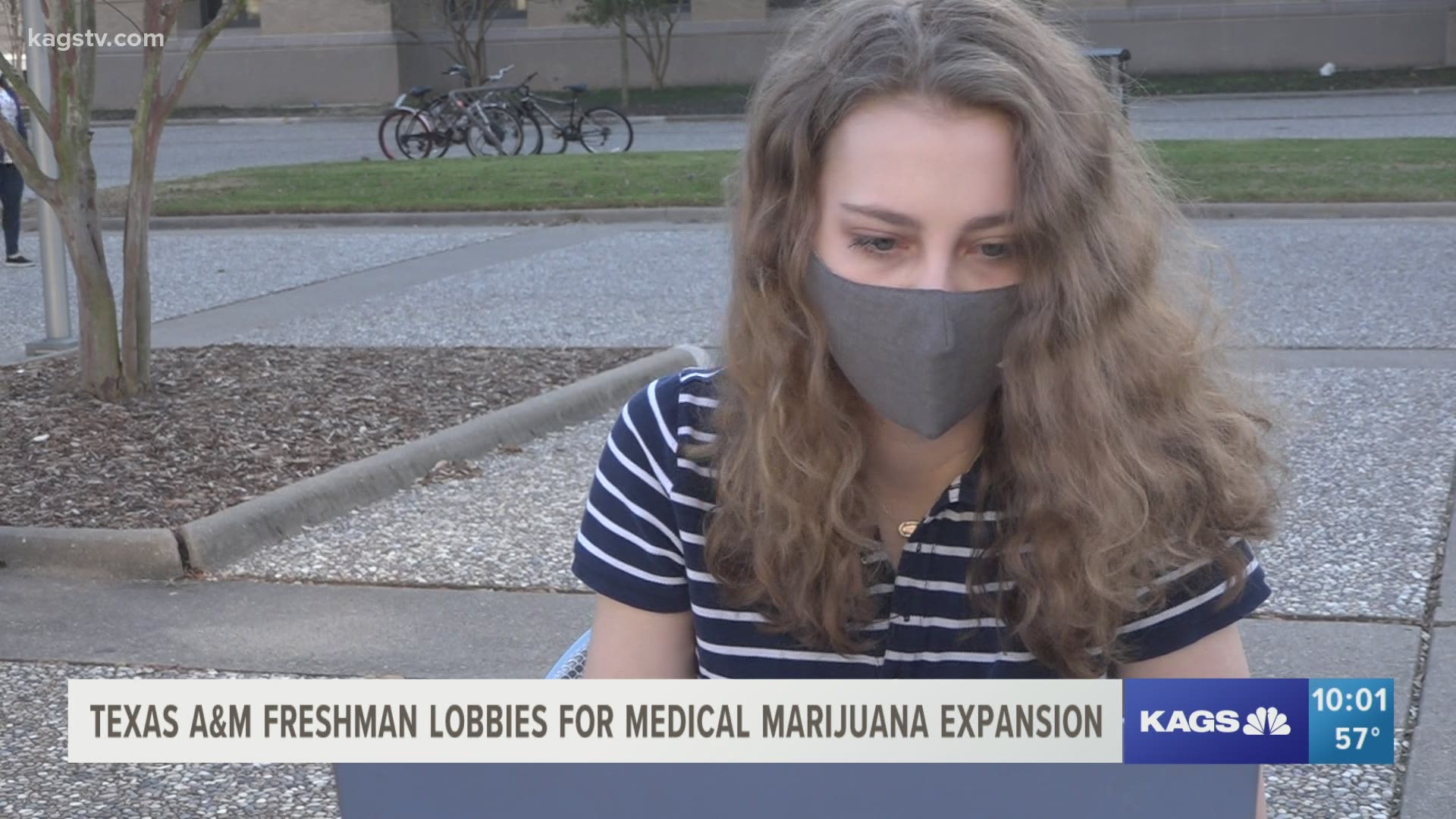 COLLEGE STATION, Texas — Julia Patterson is navigating her second semester at Texas A&M University. While starting her freshman year during a pandemic isn’t how she envisioned college, she’s making the most of it.

“I’ve found my community," said Patterson of Round Top, TX. "Everyone is just so nice and welcoming.”

As she attends classes on campus and online, 18-year-old Patterson is also getting ready to lobby at the 2021 Texas Legislative Session.

"It is my dream to be a lobbyist and advocate for people with disabilities," Patterson said.

Patterson will be one of the youngest lobbyists. She will advocate for the expansion of Texas’ Compassionate Use Program (CUP) with KK125 Ovarian Cancer Research Foundation.

This act is near and dear to her.

"In February of 2018, I was first prescribed medical marijuana," Patterson explained. "Within just two months I was completely seizure-free and I’ve maintained seizure control since then.”

Patterson dealt with epilepsy for most of her life. She had her first seizure when she was in kindergarten in 2006. At one point, she was having 200 seizures a day that lasted 15-30 seconds. Because of her disorder, Patterson missed out on a lot of life and said she struggled.

"She had tried virtually everything else that was available," said Dr. Karen Keough, Patterson's neurologist and the chief medical officer of Texas Original Compassionate Cultivation.

"It was obvious there was an improvement," Keough said. "We brought her back into the hospital and did a continuous EEG and it was normal. It was dramatically better than any study than we had ever done before.”

She attributes her medical marijuana treatment to graduating high school as valedictorian, accepted into the honors program at Texas A&M and even getting her driver’s license. Something she never thought was possible.

“I finally have a normal life," Patterson said.

"When I realized CBD oil was a valid treatment option for me, I wanted to be able to help others have that same opportunity," Patterson said.

The class of 2024 Aggie will also advocate for insurance coverage of fertility preservation services for young cancer patients and the freedom to share information related to off-label medication use.

Since beginning her #medicalmarijuana treatment, Julia has been almost seizure-free for 3 years, graduated as the valedictorian of her high school, was accepted into the Honors Program at Texas A&M University and now will be one of the youngest lobbyists in Texas. #txlege pic.twitter.com/g7ydMTwSgW