Many Texas lawmakers were in the Capitol building when Wednesday's destruction took place and are sharing their experience. 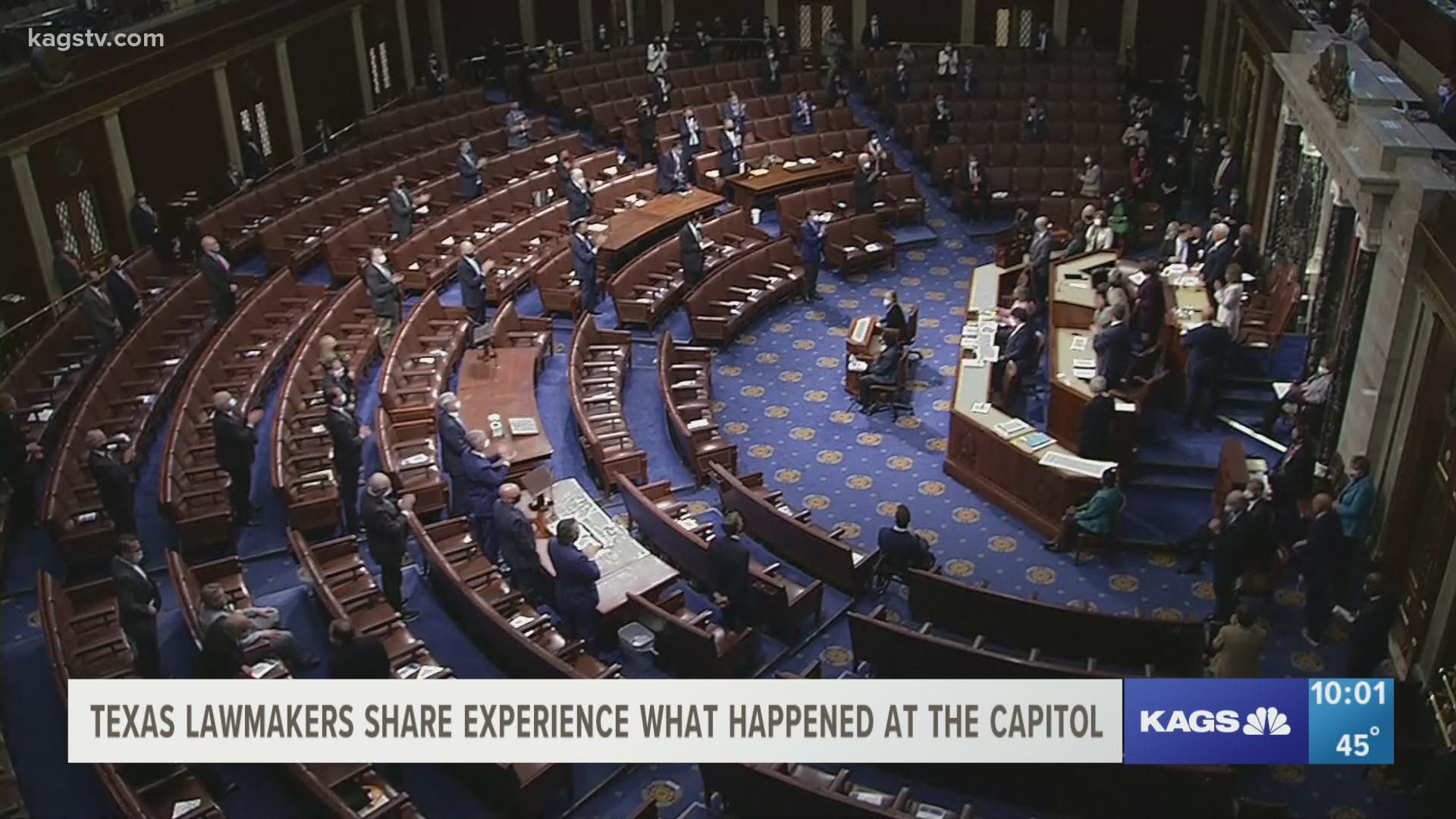 BRYAN, Texas — After the events that took place at our nation’s Capitol, Congress has confirmed Joe Biden as the Presidential election winner. Many Texas lawmakers were in the building when Wednesday's destruction took place and are sharing their experience.

When rioters stormed the U.S. Capitol Wednesday, the thought running through Texas District 17 Rep. Pete Sessions’ head wasn’t fear. He remembers thinking it was a sad day for the United States.

“It reminded me of the lawlessness that happened back in Minneapolis, Seattle and Portland," Sessions said. "It is just unacceptable.”

However, the events that took place would not change Sessions objecting to the electoral college votes in several swing states.

The congressman said after hearing hours of trials, he still had many questions regarding local election officials in select states, including local voting officials not having proper access to the voting process.

“Why didn’t local officials in each of those localities not allow these problems to be discussed back home," Sessions said.

Sessions said there still needs to be additional investigations in some of those states. He is also asking for more transparency in any future election processes. He suggests local officials be able to meet with those who may have problems surrounding elections.

“I think every county needs to go back and relook at what they did and certify it again," Sessions said. "Yes, certify it again after they’ve heard of the discrepancies.”

Sen. Ted Cruz of Texas was also at the Capitol building when the destruction occurred. He calls it a terrorist attack.

“Everyone who attacked the Capitol should be fully prosecuted and they should spend a long, long time in jail," said Cruz.

Those storming the Capitol need to stop NOW.

The Constitution protects peaceful protest, but violence—from Left or Right— is ALWAYS wrong.

And those engaged in violence are hurting the cause they say they support.

Cruz also objected to the Electoral College votes in a few states. He does not believe that his or other senator's objections played a role in what happened Wednesday.

“What I was doing and what the other senators were doing is what we were elected to do, which is debating matters of great import in the chamber of the United States Senate," Cruz said.

Both, Cruz and Sessions, agree that President Trump's statements in response to what happened at the Capitol were irresponsible.

“I think the president needs to be very careful when you’re dealing with 10,000 people," Sessions said.

Today, there was an illegal and unprecedented charge on the U.S. Capitol. It should not have occurred and should not be tolerated. My staff and I are safe. I sincerely appreciate all the calls and concern for our safety here in the nation’s capital.

Neither believes the 25th Amendment needs to be invoked, considering the amount of time left President Trump has left in office.

"We are now in the process of a peaceful transition of power to the next administration, a Joe Biden presidency," Cruz said.