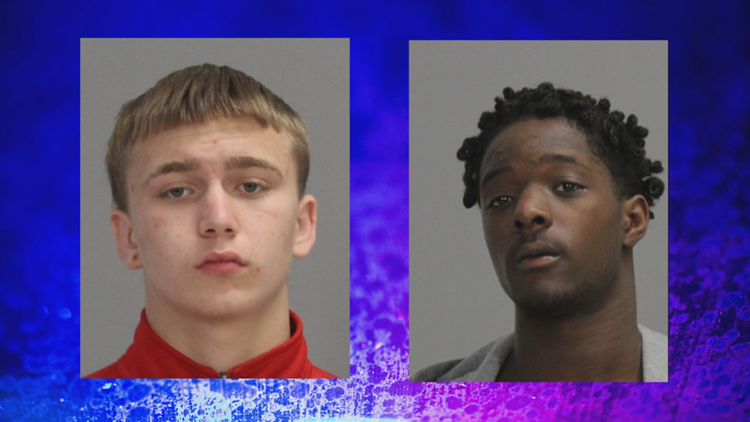 Photo by: BRAZOS CO. JAIL
Darron Adams, 17 and Jarnterian Brimzy, 20, of Nacotish, Louisiana are charged in an early morning robbery at the Circle K store on Harvey Road.

COLLEGE STATION, Texas — A Circle K employee was hurt during a robbery at the store on Harvey Road early Friday morning. College Station police said. The employee is expected to be okay and police arrested two people they believe carried out the crime.

Darron Adams, 17 and Jarnterian Brimzy, 20, both of Natchitoches, Louisiana, are charged with aggravated robbery. They were arrested by College Station police at a nearby apartment complex about an hour after the crime.

It happened at the Circle K store on the 600 block of Harvey Road just after 6 a.m. Adams and Brimzy walked into the store wearing masks and one of them grabbed the employee from behind while threatening them with a knife, police said.

The employee opened the cash register and the one not holding the knife grabbed the cash and the two ran from the store, police said. However, court documents state the suspects were caught on surveillance video before they left the area.

The employee did suffer an injury, but did not get hurt with the knife, police said. Paramedics with the College Station Fire Department responded to give medical attention.

While searching the area after the robbery, police said they found Adams and Brimzy at the nearby Huntington Apartments. They said the two had clothing that matched that of the suspects in the Circle K store and officers were able to find the masks used in the robbery. After being questioned by police, Brimzy admitted to what happened, police said, and told officers he had hidden the money inside the apartment he was visiting in the garbage disposal.

Adams and Brimzy are currently in the Brazos County Jail. Their bonds have not yet been set. Adams is wanted out of Natchitoches Parish for fleeing Drug Court.

RELATED: A Jaguar, a Tesla, 13 pounds of marijuana & over $65,000 seized in College Station drug bust near park