Five local athletes are preparing for their first and second chances to prove they have what it takes to survive inside the octagon. 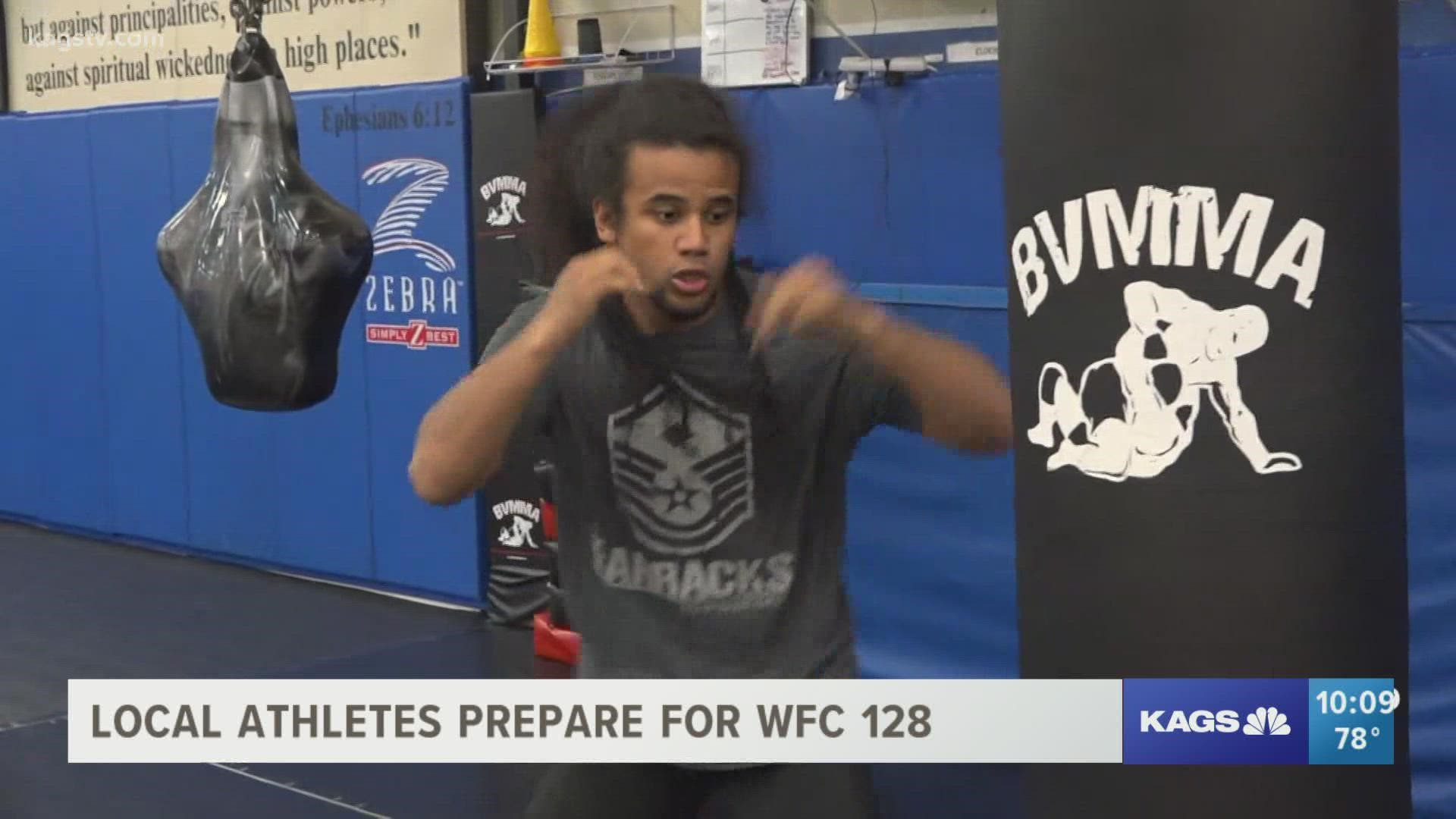 COLLEGE STATION, Texas — As Aggieland prepares to host the World Fighting Championships for the second time at Reed Arena for WFC 128, local athletes are preparing for their first and second chances to prove they have what it takes to survive inside the octagon.

“They've had you know one hiccup, a glitch, but otherwise, we did awesome with some adversity and dominated a couple of fights,” Bush said, “I was very happy.”

Heading into WFC 128, Bush said there are some differences fans can expect to see from BVMMA.

“One, we have a debut coming in with JT Hamilton so brand-new amateur comes to fight, we have a pro debut with Tyler Flores and we got Drew Lindsay in the super heavyweight coming back,” Bush said.

WFC 128 will fill Reed Arena with its Las Vegas-style combat fighting including bright lights, great music, and of course three hours of high-octane, unhinged mixed martial arts, other than all that, Bush said people should come out to support their local fighters.

“Come on out support the local boys, a couple of these guys gonna be in the UFC very shortly, I predict,” Bush said, “so it's a good time to get to watch them while they're still here.”

ATTENTION: @WFCFight is making its second appearance inside @ReedArena on Oct. 22 and I'm so excited.

If there’s anyone to look out for Friday night, it’s Nio Mino who took home the win in his pro debut fight in WFC 125 on June 5. Mino will enter the octagon in the main card fight once more weighing 175 and facing Zach Takacs. Mino said he knows Takacs is dangerous.

“He's never been to the cards before,” Mino said, “I've looked him up, he's very tall, very lengthy looks, very disciplined, and I'm excited to go on there and try to put on a show,” Mino said.

Mino said Takacs has a strong chance of finishing him [Nio] so he wants to go in there [the octagon] and do his best to try to not only mitigate that from happening but also put on a show.

“I'm gonna want to go out there and it's the number one goal is entertain the fans,” Mino said.

Mino’s Prep Before the Fight: the mental switch

If you’ve ever met Mino in person, you know he is night and day different when he’s outside of the cage versus when he’s inside the cage, Mino said regardless of how different he looks, he’s just trying to have fun.

“It's just a different kind of fun,” Mino said about being in the cage, “I'm going in if I'm too playful because there is a too playful and I'm not taking it serious enough, then I can really get hurt, I can really lose a lot of credibility in front of a lot of my students, or other, some of my peers.”

Mino said since there’s a lot riding on the line, he tends to bite down a little bit and get in there to make something happen.

Mino’s The Prep Before the Fight: the pre-game meal & ritual

Before every fight, Mino said he likes to eat a home-cooked meal.

“It's called estufao and it's my favorite dish, and the thing is I can only eat it If everything goes accordingly,” Mino said, “So it's just kind of like a reward for myself and my queen makes it so it's a delicious home-cooked meal from back home.”

As far as pre-fight rituals go, before the bell rings, as they mention his name, Mino said he will grab onto the cage and try to rip it out of the ground.

“I try to rip it right out of its place and that just kind of makes me feel like I know that I'm trapped so I'm gonna have to figure it out,” Mino said, “So that's where I guess that switch is, that I go through as far as rituals.”

This time, Mino said he wants to see the fight last longer.

“I want the fight to go at least to the second round, and they [fans] can definitely look forward to seeing us [he and Takacs] put on the show because I've seen some of his films and that man is a very calculated striker,” Mino said, “I know that the worlds gonna love it.”

Who Mino looks up to/mirrors his style of fighting from

As far as fighting, Mino said he looks up to T.J. Dillashaw.

“[Dillashaw is] pretty much the most complete striker that I see, he does everything ambidextrous, covers every angle,” Mino said, “[he’s] amazing.”

“His entries into getting these done is my opinion, ideal,” Mino said, “It's about time, it's not about who works the hardest.”

Mino’s thoughts on what it takes to win big

Mino said it’s not about who’s the strongest or fastest, it’s about who can calculate times.

“I’m a big calculator, getting it done that way,” Mino said, “that's as far as physical in the fight game.”

Mino said then, of course, there’s the worker.

“I mean when it comes down to who works harder me or you, I'd like to say that I'm gonna go ahead and win if that case because we’re trending under him, this isn’t just a chore, It's labor,” Mino said, “It's a labor, we can all attest to that.”

If you’d like to try out MMA you can visit BVMMA’s Facebook page or send them an email.