Trump stopped in for an exclusive interview in the Superdome with WWL-TV before kickoff at the national championship. 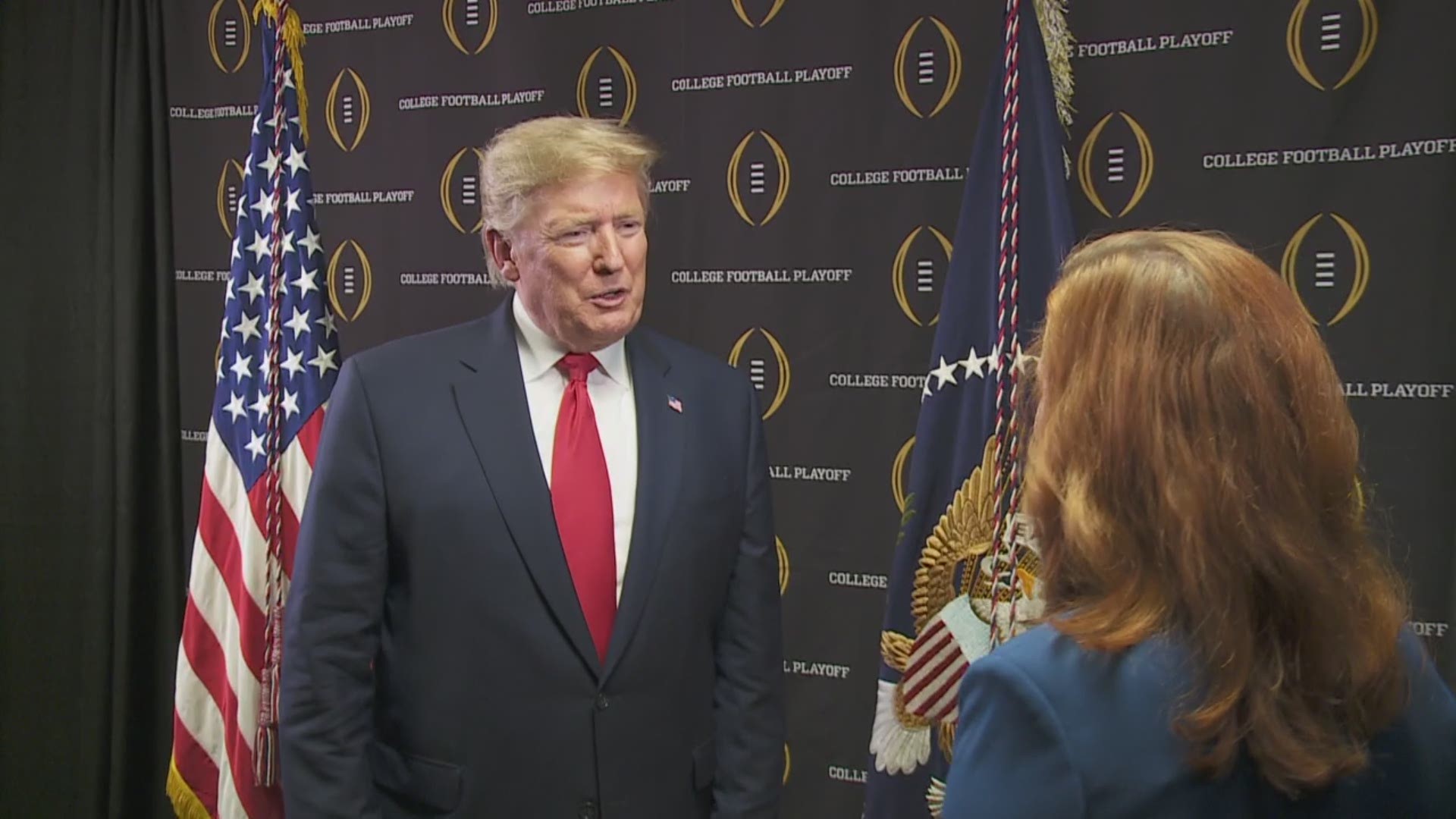 NEW ORLEANS — President Donald Trump stopped for a pre-game interview with WWL-TV before taking the field of the Mercedes-Benz Superdome at the College Football Playoff Championship.

The President and First Lady Melania Trump flew from Washington, D.C. to New Orleans Monday for the national title match up between LSU and Clemson. They walked the field to loud cheers and chants of "U-S-A!" as the president was on the field for the presentation of the flag and the national anthem.

Before hitting the turf, President Trump stopped with WWL-TV's Katie Moore to talk about the game, impeachment, the Louisiana Governor's race and recent environmental policy changes that will impact the state.

When asked why he took the time to visit New Orleans for the game, Trump said he loved the area and called both teams tremendous.

"Louisiana has been very special in the sense of the success, and South Carolina likewise we've had tremendous success,"Trump said.

Trump said it would be a great game and that he had received several invitations from local politicians to attend.

"I think it's going to really be something special. It's great for the country," he said.

Sticking to regular form, he called the impeachment "a hoax" and "a very bad thing for our nation," questioning why Speaker Nancy Pelosi (D-Ca.) and congressional Democrats have delayed sending two articles of impeachment through to the Senate.

Trump faces two articles of impeachment, one for abuse of power and the other for obstruction of Congress, in connection to his phone call with Ukrainian President Volodymyr Zelensky.

Trump then segued into the state of the economy, the military and the Office of Veterans Affairs, saying all three had improved greatly during his administration.

The president also said he had just met with Governor John Bel Edwards outside the interview. Edwards was sworn into his second term as governor earlier that day following a contentious November runoff with Republican challenger Eddie Rispone, whom Trump and Vice President Mike Pence rallied for several times throughout his campaign.

Trump said they had done a good job supporting Rispone and called him a good man that had worked hard during the race.

Trump said he would work with Louisiana leaders on energy issues, and Moore asked the president if his administration's rollbacks of offshore drilling safety regulations could put workers and the environment at risk.

"It's my honor to have done it," Trump said.

► Get breaking news from your neighborhood delivered directly to you by downloading the new FREE WWL-TV News app now in the IOS App Store or Google Play.