The Connecticut schools leader has increasingly pressed to reopen, saying it's harmful to keep students at home. 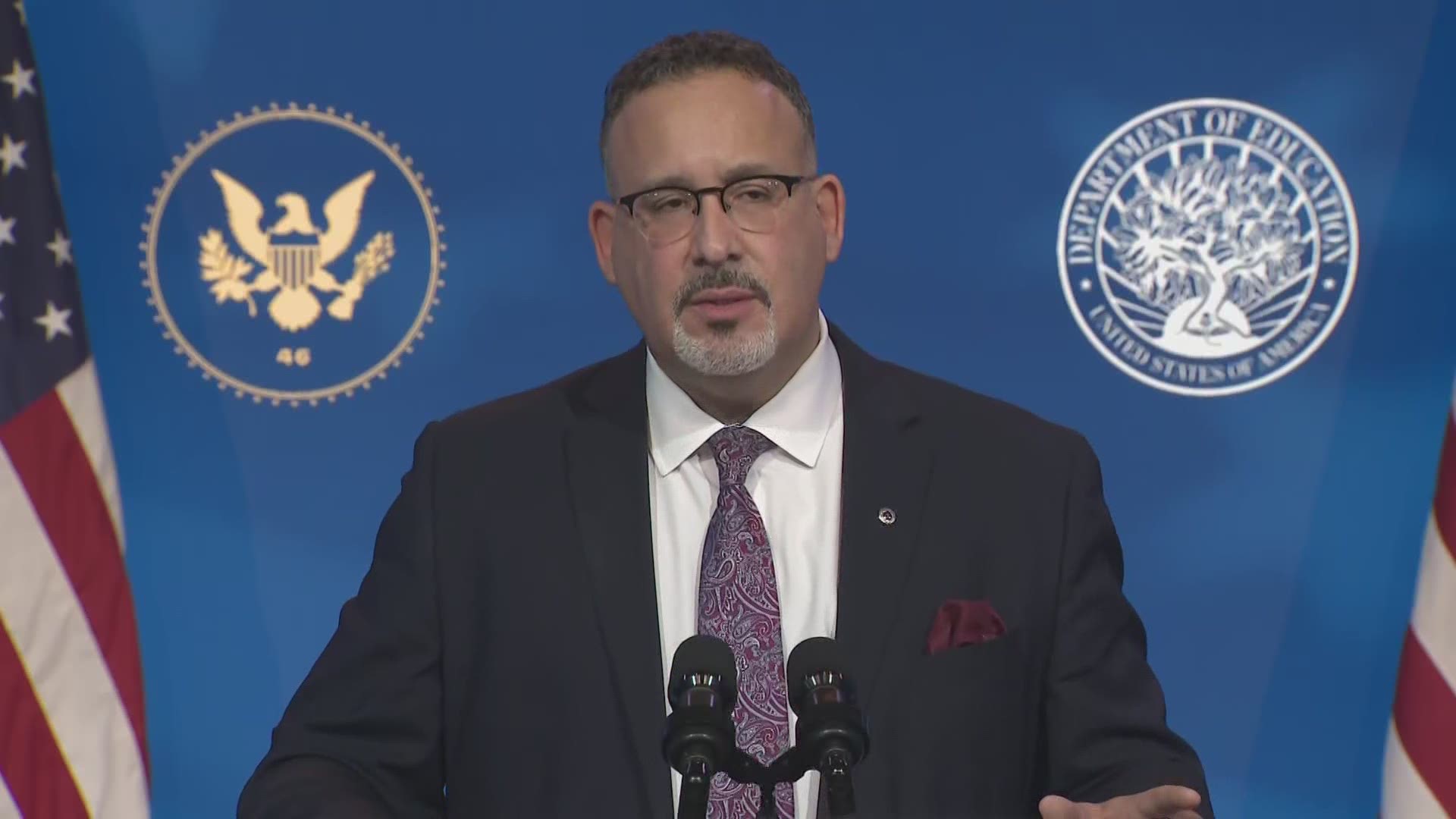 WILMINGTON, Del. — President-elect Joe Biden introduced Miguel Cardona as his pick for education secretary on Wednesday, saying Connecticut's education chief and life-long champion of public schools is the right pick to lead the department as the nation struggles to educate students safely during the pandemic.

The selection delivers on Biden’s promise to nominate someone with experience working in public education and would fulfill his goal of installing an education chief who stands in sharp contrast to President Donald Trump's Education Secretary Betsy DeVos.

Unlike DeVos, a school choice advocate whom Biden says is an opponent of public schools, Cardona is a product of them, starting when he entered kindergarten unable to speak English.

During remarks in Wilmington, Delaware, Biden called Cardona a “brilliant” educator who would help further his administration's commitment to re-opening schools safely.

“We can do it if we give school districts, communities and states the clear guidance and resources that aren't already in their tight budgets," Biden said, adding that addressing the issue “requires someone who understands the need to prevent the pandemic from further exacerbating the inequities in our education system.”

Dr. Miguel Cardona has been nominated by the president-elect to lead the Department of Education.

As a former public school teacher, he will lead the effort to invest in all students, support educators, and make reopening schools a national priority. https://t.co/mc1eq3WpbK

Early next year, Biden said he'd send to Congress a plan on next steps for the education system, including funding to keep educators employed and safely reopen schools.

In introducing Cardona, Biden noted his focus to broaden remote learning across communities in need and ensure schools in his state had appropriate safety gear.

“That's the vision, resolve and initiative that are all going to help us contain this pandemic and reopen our schools safely," Biden said. “It's a standard of care that comes from having taught in a classroom. ... He is a secretary of education for this moment.”

Cardona, 45, was raised in a housing project in Meriden, Connecticut, and went through the city’s public schools before returning to work as a fourth-grade teacher in the district in 1998. At age 28, he had become the youngest principal in the state before working his way up to assistant superintendent of the district.

Referencing his immigrant grandparents and bicultural upbringing, Cardona several times made comments in in Spanish.

“I, being bilingual and bicultural, am as American as apple pie and rice and beans," a background he said gives him perspective on how to address the nation's education inequalities.

“I know how challenging this year has been for students, for educators and for parents. I’ve lived those challenges alongside millions of American families,” Cardona said. "It's taken some of our most painful longstanding disparities and wrenched them open even wider."

Cardona was appointed to the top education post in Connecticut just months before the COVID-19 pandemic broke out in March. When schools moved to remote learning, he hurried to deliver more than 100,000 laptops to students across the state. Since then, however, he has increasingly pressed schools to reopen, saying it's harmful to keep students at home.

If confirmed, his first task will be to expand that effort across the nation. Biden has pledged to have a majority of U.S. schools reopened within his first 100 days in office. He is promising new federal guidelines on school opening decisions, and a “large-scale” Education Department effort to identify and share the best ways to teach during a pandemic.

Cardona's position on reopening schools has sometimes put him at odds with not only teachers unions, which have called for school buildings to be closed until safety measures are met, but also with some parents who say schools should be ordered to open.

But despite their occasional conflict with him, a coalition of Connecticut education unions supported his candidacy as Biden's education secretary. Cardona was also backed by the Congressional Hispanic Caucus, which has pressed Biden to appoint more Latinos to Cabinet positions.

Beyond the pandemic, Biden's education secretary will also be tasked with reversing an array of policies enacted by DeVos. Biden has vowed to revoke Trump administration policies including DeVos' new rules on the handling of campus sexual assault cases, and he promised to restore several Obama-era rules that DeVos revoked or rewrote.

Biden's education plans also include measures that align with Cardona's interests. The Democrat has pledged to triple federal Title I funding for the neediest schools and has proposed free preschool as well as policies meant to diversify the nation's teaching force.