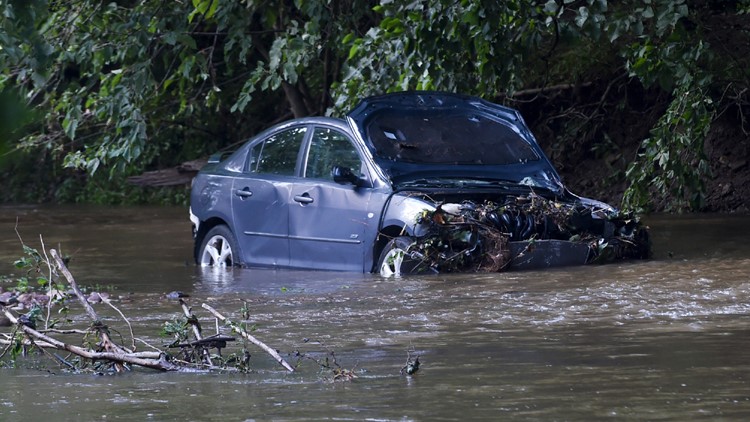 Photo by: AP
Receding floodwaters of the Manatawny Creek in Boyertown, Pa., Friday, July 12, 2019, reveal the vehicle in which a pregnant woman and young son drowned Thursday after their car was swept from Grist Mill Road in Douglass Township.

BOYERTOWN, Pa. — A series of storms socked the Northeast with heavy rains and strong winds, causing the deaths of a 9-year-old boy and his pregnant mother whose car was swept away by floodwaters while she was on the phone with emergency officials.

A car driven by a pregnant woman in Pennsylvania was swept down the Manatawny Creek for about a half-mile on Thursday. She was on the phone with emergency workers for about 45 minutes, Douglass Township Police Chief John Dzurek told The Reading Eagle . Numerous flooded roadways made it difficult for responders to reach her during the ordeal, as the current started to float police vehicles, Dzurek said.

A firefighter who was put in contact with the woman, who was identified as 31-year-old Pamela Snyder, was able to stay on the phone with her for several minutes before they lost contact, Dzurek said.

The last thing she told the firefighter before the call dropped was that the nose of her car was starting to go down into the water, he said.

Emergency workers found the car nearly five hours later. The bodies of Snyder and her son Preston Dray were removed on stretchers, but the car remained in the creek Friday morning.

Receding floodwaters of the Manatawny Creek in Boyertown, Pa., Friday, July 12, 2019, reveal the vehicle in which a pregnant woman and young son drowned Thursday after their car was swept from Grist Mill Road in Douglass Township.
AP

Family members told police she was about eight months pregnant.

Floodwaters also closed several streets in the Pittsburgh area Thursday night, but most had reopened by morning. The storms also knocked down trees and power lines, causing sporadic power outages across the region.

Heavy rains passing through the Pittsburgh area opens up a massive sinkhole Thursday, July 11, 2019, at the intersection of McKnight Circle and McKnight Road in the North Hills neighborhood of Pittsburgh. (Peter Diana/Pittsburgh Post-Gazette via AP)
AP

Portions of southeastern Massachusetts were hammered by heavy rain overnight, with the National Weather Service reporting that more than 5 inches (12.7 centimeters) fell over a six-hour period in Plymouth. Some road closures were reported, but no injuries. A flood warning was in effect for Provincetown, at the tip of Cape Cod, until midmorning Friday.

Two cars are seen submerged by floodwaters along Route 130 in Penn Hills, Pa., Thursday, July 11, 2019. The National Weather Service issued flash flood warnings for parts of Allegheny and Westmoreland counties on Thursday and the rain is expected to continue throughout the day. (Stephanie Strasburg/Pittsburgh Post-Gazette via AP)
AP

In New Jersey, National Weather Service investigators confirmed a tornado touched down in Mount Laurel Township on Thursday evening. It's the second small tornado in the southern New Jersey town in less than a week. Thursday's tornado was an EF-1, which reaches wind speeds of 90 mph.

Parts of New Jersey received more than 3 inches (7.62 centimeters) of rain from the storm.