Congress authorized military spouses reimbursements for relicensing costs when they are moved from state to state, but a year and a half later, the service branches have not reimbursed any money. 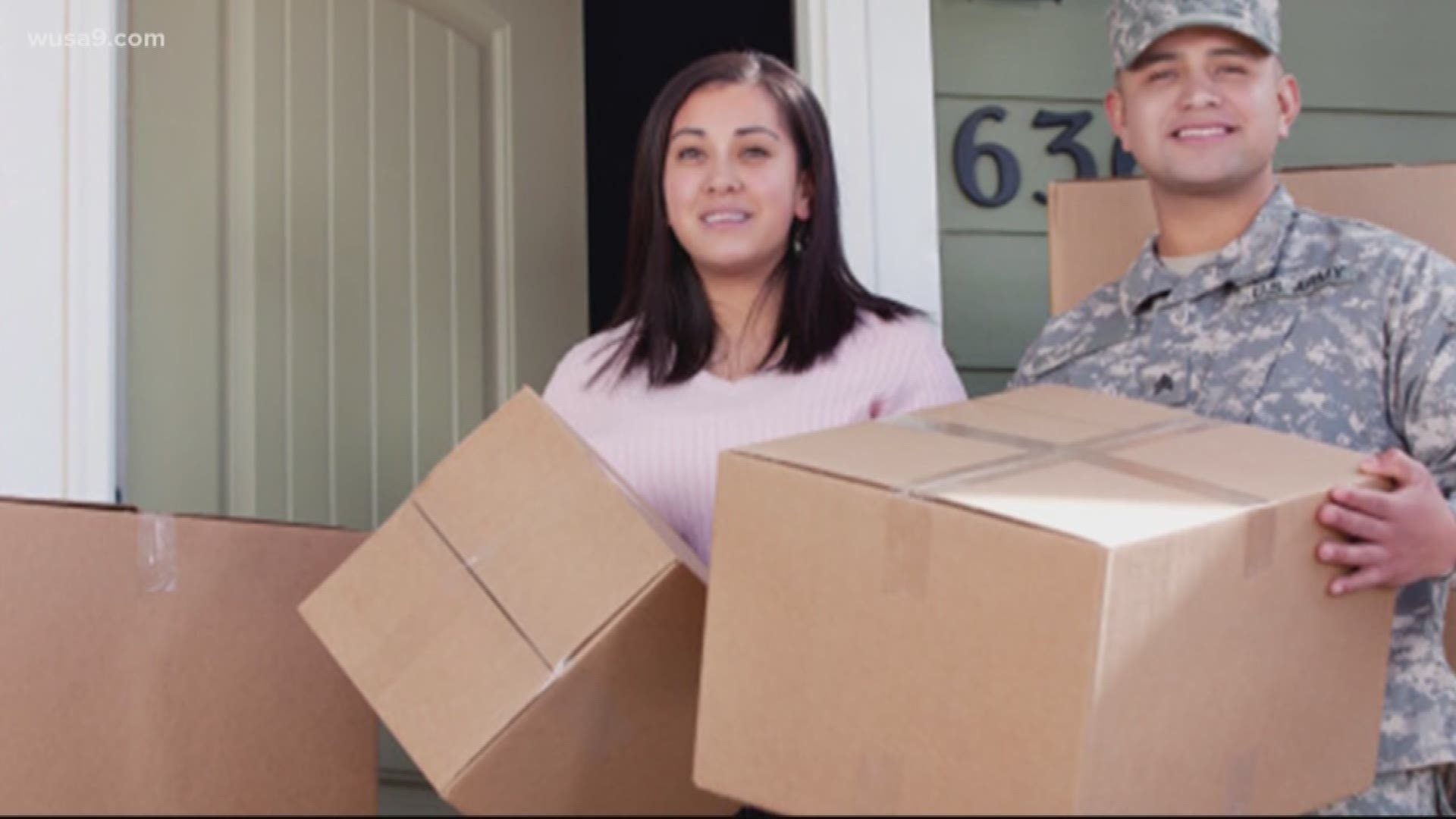 WASHINGTON -- What would you do if you had to start over your career every two to three years? If you're married to someone in the military, that's exactly what happens. If a woman in the Army gets moved to a new base, her husband follows. If a man in the Navy gets reassigned, his wife moves with him.

The government is supposed to help military spouses with some of the employment costs that come with these moves, but WUSA9 learned, that's not happening yet. Military families explained it is affecting their bottom lines, morale and troop readiness.

"I had a good community, a lot of contacts, an active client base," realtor Amse Heck said.

She described her career in Philadelphia.

"We're in classrooms every day because we want to teach children," teacher Liz Persaud said. "The students, they have a happiness that you can't really find anywhere else."

Heck and Persaud are two people who love what they do. But what they do is sometimes complicated by who they are. They're two of the hundreds of thousands of military spouses, who have to move every two to three years. Multiple surveys show finding a new job in a new state is consistently a top concern for these families.

Heck was a real estate agent in the suburbs of Philadelphia. She had to move her family to Northern Virginia for her husband's next tour as an activated reservist in the Air Force Reserves.

"I had built a business by knowing people in an area that I had lived for a while," Heck said. "Then we came here, and I didn't know anyone."

A career is an investment and finding a new job costs money. Lawyers have to pay to pass the bar. Teachers must write a check to get a license. Nurses need to pay up to get their certifications. When you do this every time the military reassigns your spouse, starting from scratch adds up because then, every dollar counts.

"Besides paying for the classes, for the test, and then for my license, I'd also have to join a brokerage," Heck said. "By the time John and I looked at it, it was several thousand dollars."

So now, Heck is a former realtor. The transition was so difficult and expensive, she got out of the business.

It's a fate Persaud considered, as well, when the Army moved her husband from Fort Bragg, N.C., to the Pentagon. To finally get her Virginia teaching license, she had to shell out hundreds of dollars.

"In addition to everything else, you kind of just hope that there's enough to cover all of the expenses," Persaud said.

The two women aren't alone. According to the National Military Family Association, more than 30 percent of military spouses who work in fields that require a license or certification. Of those, 70 percent encountered challenges maintaining their licenses or certifications, Blue Star Families reports.

This isn't just about money in their pockets. NMFA believes there are ripple effects for those who fight wars for us.

"When you're stressed about what's going on at home, no matter if it's financial, if it's employment, if it's education, anything going on back at home, that has your focus, instead of the task at hand when you're deployed," Government Relations Deputy Director Jen Davis said. "That can really affect the mission down range."

But it isn't supposed to be that way. Congress knew it could help and decided to allow each service branch to reimburse military families for certain re-licensing costs when they're moved. They can get back up to $500. The law was negotiated back in 2017. WUSA9 checked in with the Army, Navy, Air Force, Marines and Coast Guard. Almost a year and a half later, not one of dollar has been reimbursed.

"This is the future of our country that are in our classrooms right now and you want licensed educators there," Persaud said. "If there's any way to expedite that for military spouses, then why wouldn't we do that?"

It's a question WUSA9 brought to Maryland Congressman Anthony Brown. He gets the challenge -- Brown served on Army active duty and in the Reserves for thirty years.

"I'm just as frustrated as I'm sure military families are and very disappointed," Brown reacted.

Reimbursements happen in the military all the time. We asked Brown if it is OK this particular reimbursement is taking so long to put in place.

"No, it's outrageous," he said. "I don't see why the service components -- Air Force, Army, Navy, Marines -- haven't been able to get their act together."

Once WUSA9 started asking questions, it seems like they are, to a degree.

After a month of back and forth, the Army tells us the money is coming.

They’re working on “the when,” but promised it will be retroactive to 2017. The Air Force and Navy now say they will be rolling out programs by June. The Marines are still finalizing their policy and the Coast Guard hasn't responded to our questions.

On top of that, even though not one military spouse has been able to take advantage of the help lawmakers authorized, the program already has an expiration date. The law said these reimbursements won't be given after 2022.

So, now Brown, who sits on the House Armed Services Committee, is looking to extend the program.

"When we're asking a warrior and his family or her family to move from one location to another, we need to make sure we're reimbursing them," Brown said. "That's Congress' intent and the department needs to execute."

As Liz looked over her lesson plans, the consequences of the delay in execution feel very real.

"Organizations like the DoD do provide support for the service member while at work," Persaud said. "We are the support at home, and in order to continue supporting our service members, you might have to give us what we need. For me, that's my career and my job and the tools needed to continue doing that career."

Lawmakers are currently considering whether to extend the program in the National Defense Authorization Act of FY20, to make up for the delay.

Members of the public can ask their representatives to support this move. The bill is scheduled to go up for debate in June.

"Now is a really important time to bring up issues impacting service members and their families, as we will take up the NDAA in May," Virginia Sen. Tim Kaine said in a statement.

"Every year, this must-pass bill is a key opportunity to strengthen support for military families and check in on the implementation of past reforms. Military families sacrifice so much for our nation, and we owe them our full support as they tackle the many challenges that come with military life," Kaine said.

One other question WUSA9 asked: What happens to the people who paid these fees and could have been reimbursed in the year and a half since the program was authorized? Some of the services responded they are now considering whether or not to make the programs retroactive.

"The Army is dedicated to supporting families and has long advocated for Soldiers' employed spouses," Army Spokeswoman Liz Chamberlain said. "To defray expenses incurred during reassignments, the Army will reimburse Soldiers up to $500 for military spouses' licensure and certification costs resulting from a relocation across state lines. The policy is retroactive to December 12, 2017. The Defense State Liaison Office continues to work with all 50 states to make it easier for Army spouses to transfer their professional licenses when relocating."

We also wanted to find an explanation for why it is taking so long to put out this program.

"Because the timeline for implementation is determined by internal staffing dynamics, I don't believe on-the-record commentary would be appropriate," U.S. Navy spokesman Lt. Clint Ramsden said. "We don't comment on internal deliberations related to meetings on legal, financial, and procedural processes. Fortunately, the Navy is currently expecting to apply the policy retroactively, members and their spouses should be eligible for reimbursement if they relocated between the NDAA announcement and the policy implementation date."

“The 2018 NDAA authorized each service to develop a program for reimbursement of re-licensure costs military spouses incur when their active duty spouse executes permanent change of station orders,” Marine Corps Spokeswoman Yvonne Carlock wrote in response to our questions. “The Marine Corps is finalizing its policy and plans to announce implementation of the plan shortly."

“The policy is currently in the routing process to obtain leadership and legal coordination,” U.S. Air Force Capt. Carrie Volpe responded. “We are continuously striving to make quality of life improvements for our Airmen and their families.”