In the second forum hosted by the B-CS Chamber of Commerce this week, candidates answered questions about spending taxpayer money, their loyalties and priorities. 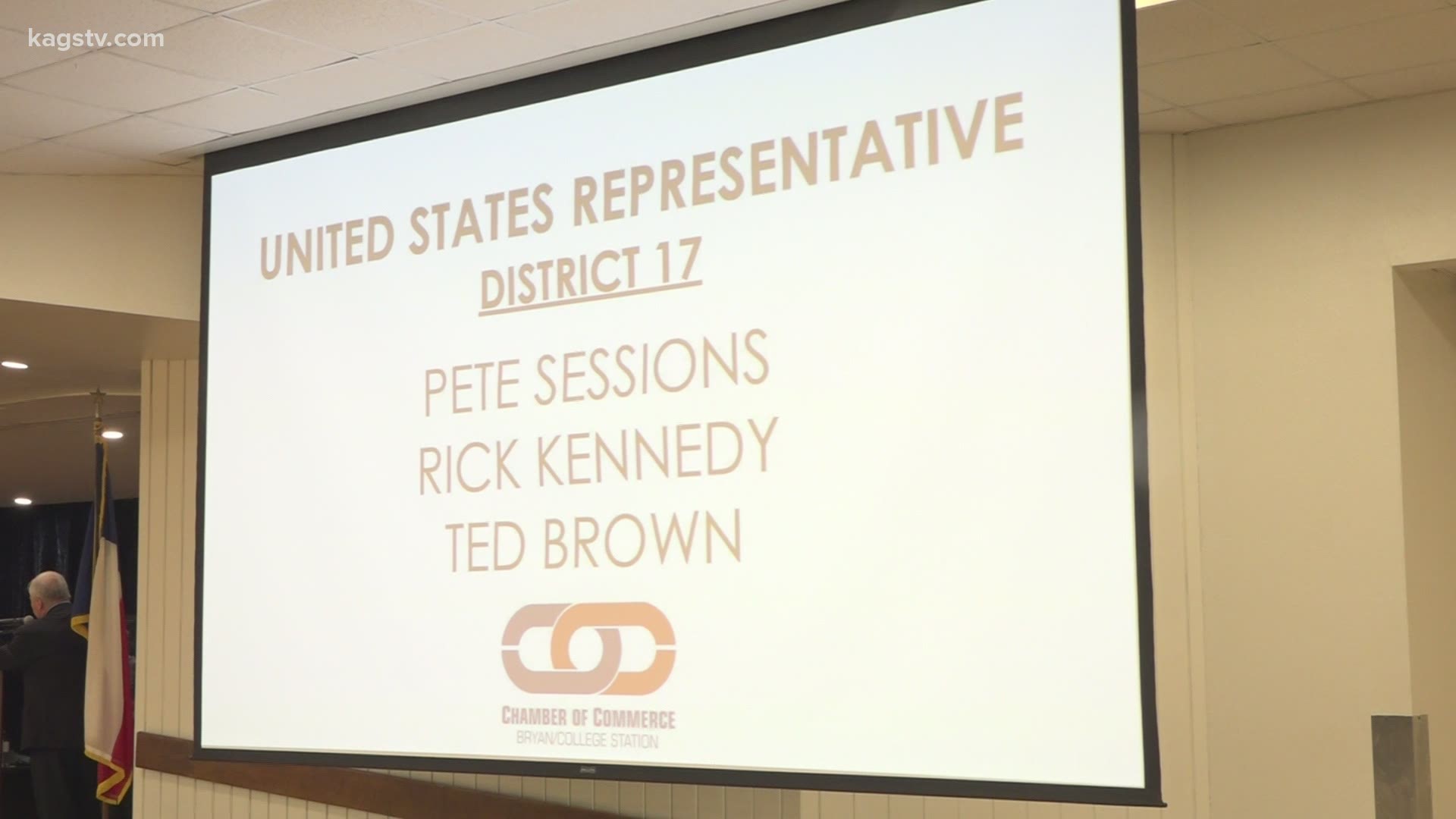 BRYAN, Texas — There are less than three weeks until Election Day, and the third day of early voting wrapped up on Thursday, October 15, 2020.

The B-CS Chamber of Commerce hosted another forum for local candidates from 6 to 8 p.m. Thursday evening.

They were asked about subjects like how much attention they would give their position, where they feel tax dollars should go and what their priorities are.

For Sherman, her priorities lie with her constituents and issues like mental health.

"If we could provide more of that, that would be great," she said. "As Bryan-College Station continue to grow, housing affordability issues are going to be an issue the county has to deal with."

For her competitor, Russ Ford, his desire boils down to three things: "ensuring we're good stewards of our infrastructure, promoting growth instead of holding it back, empowering our citizens through responsible and thoughtful policy at the county level and being diligent in how we spend the quarter of a billion dollars in our county's budget."

The questions for the candidates for U.S. Representative District 17 dove more into their loyalty to their parties and to the people they would serve in that position.

Libertarian candidate, Ted Brown focused a lot of his remarks on how the economy shut down in the height of the COVID-19 pandemic.

"I would not close anyone's business," he said. "I want to encourage people to go into business to be self employed. They want to get out there and start a business they shouldn't be limited by government regulation, licenses. I am not beholden to any special interest groups and corrupt party leaders. I am first beholden to the U.S. Constitution and then to the people of the 17th District."

Rick Kennedy, the Democratic candidate in the race repeatedly addressed questions about how staunch his loyalty to his party leadership would be.

"I'm not here to win this seat for my party, I'm here to win it for us," he said. "I'm here to find solutions that improve the health, the security and prosperity of all Texans, and if you elect me, I will put the interests in central Texans first, country before party, and my oath to the constitution above all."

The Republican running for the seat, Pete Sessions used his closing remarks to express his pride in the country.

I was at the @BCSChamber’s second candidate forum this week. Catch the highlights and response from voters who attended tonight on @KAGSnews pic.twitter.com/cVrlTtMKet

After hearing what all five candidates had to say, a few attendees willing to share their thoughts all came to a consensus with the same goal: To be educated voters in this election.

Hannah Decker, a B-CS local who moved to the United States from Britain and became a citizen two years ago, said November 2020 would be the first time she participates in an American election.

"[The forum] was definitely a very good way to find out about their policies, and I feel like I can go into the election and feel like I can make an informed choice," she said.

In longer-term citizen, Virginia Ford's opinion, the forum did not sway her, it educated her.

"I like the live nature of this," she said. That it's not something someone has written and put on a webpage. You get to actually hear the contestants talk about what they're passionate about or what they want to change."

Mike Connor, another B-CS local works for BTU and is a volunteer with the B-CS Chamber of Commerce.

After watching the candidates, he said, "these forums are very important, because it's important for voters to be informed when they go into the polling places to make informed choices about who's going to be leading our government."

The candidates for state Representative District 14 were also scheduled to speak Thursday evening.

Due to COVID-19 concerns involving one of those candidates, their segment of the forum was skipped.

If you missed the forum, you can find it on the KAGS Facebook page.