A Daytona Beach roller coaster passed an inspection. Then, it derailed and two riders fell 34 feet.

A total of 10 people were rescued from the roller coaster. Six of them were taken to the hospital. 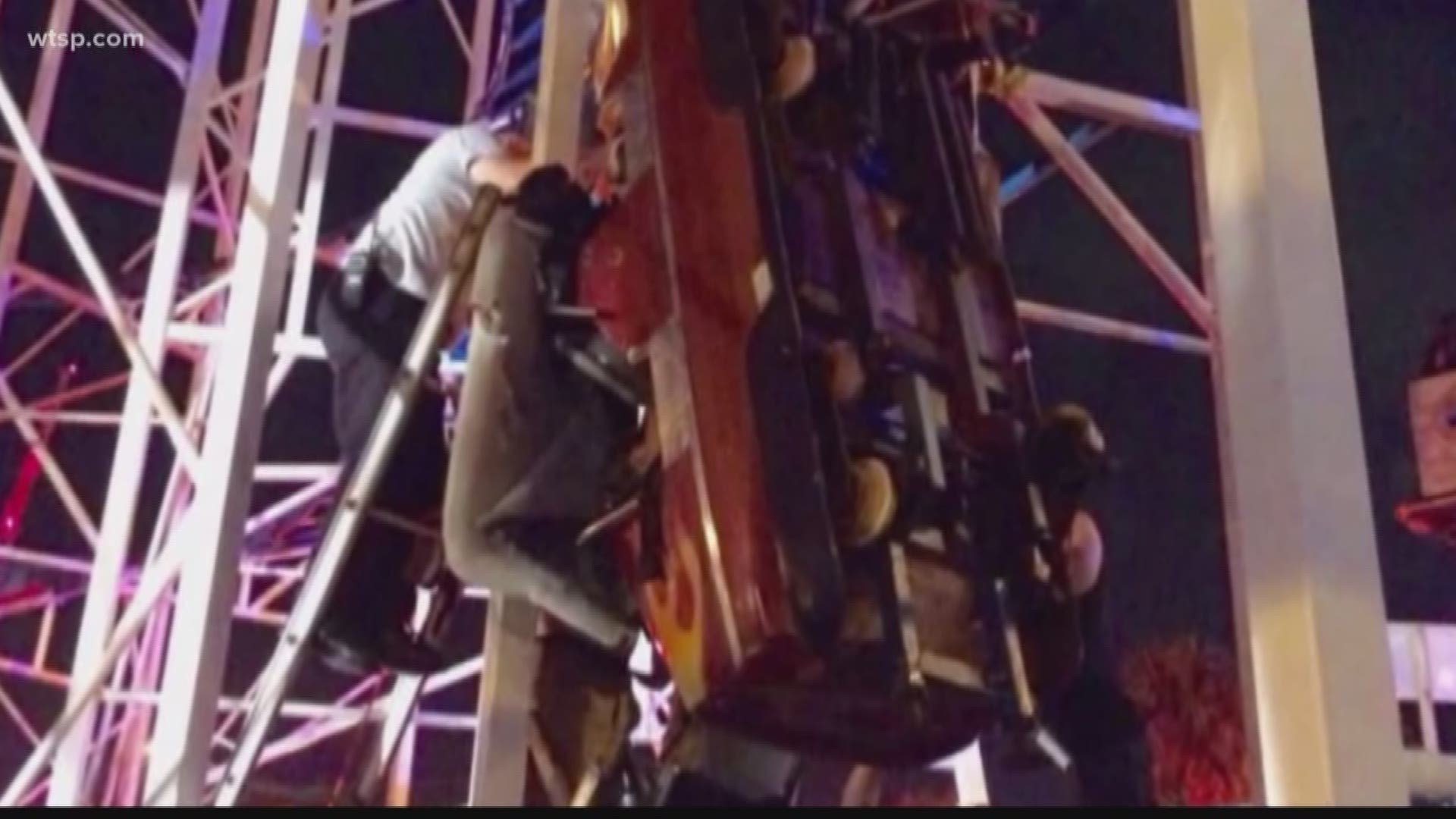 DAYTONA BEACH, Fla. - A roller coaster at the Daytona Beach boardwalk in Florida derailed Thursday night, injuring multiple passengers and leaving a car dangling from the tracks, authorities said. And, the ride had a previous history of problems.

Ten riders were in three roller coaster cars when the front car derailed completely and was left dangling from the track.

Daytona Beach Firefighters in the process of rescuing riders from rollercoaster accident at Boardwalk pic.twitter.com/vm1GctCGhq

Two of the four people in that car fell 34 feet to the ground, Daytona Beach Fire Spokeswoman Sasha Staton said. The other two were left trapped in the dangling car, Stanton added.

Emergency crews rescued the two people who were in the dangling car and pulled the six other people trapped on the coaster to safety.

The two riders who fell were taken to the hospital with traumatic injuries. They were listed in serious condition. Four of the rescued riders were also transported to the hospital, but the extent of their injuries was not immediately known.

DB Firefighters working as fast as they can to rescue 2 riders that are in a dangling rollercoaster car pic.twitter.com/v0UrChJdHC

Investigators are unsure how the front car derailed. But, fire officials said the track appeared to be intact when it happened.

According to the Daytona Beach News-Journal, the coaster is roughly 45 years old and opened in Daytona Beach after being bought from an amusement park that closed in Delaware.

The roller coaster -- named the Sandblaster -- had a history of problems. As recently as May 17, cracks were reported in the track, braces and anchors were cracked, there was excessive corrosion to the ride and some restraint latches were not working, according to public records obtained through the Florida Department of Agriculture and Consumer Services. But, the same day the crash happened, inspectors filled out a newer report claiming those issues had been resolved.

The Florida Department of Agriculture and Consumer Services released a statement about how the ride passed inspection the same day of the accident.

“First and foremost, we’re concerned about the individuals who were injured last night. Their well-being and recovery is of the utmost importance. Just [Thursday], department inspectors conducted a thorough inspection of the ride, and it was found in compliance with state law. We have launched an investigation to determine the cause of the accident, and anyone who should be held accountable will be held accountable.”

Generally speaking, when rides fail inspections, stop operation orders are handed down by the state. In those cases, the rides cannot operate again at the same location until their red tags are removed by an inspector. All amusement park rides are legally required to be permitted annually by FDACS and to undergo nondestructive testing for structural integrity, in addition to having annual inspections by professional engineers or qualified inspectors. On a daily basis, the ride owners or operators are responsible for inspecting their rides each day.