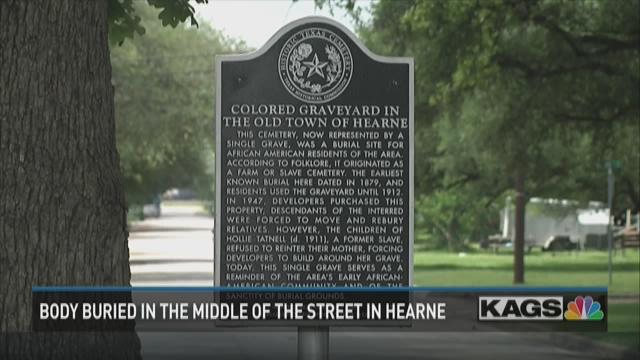 HEARNE, Texas - Hearne has a land mark that you might have missed because it is actually underground.

A lone graveyard in the middle of Wheelock St. that belongs to Hollie Tatnell.

She was born a slave in Texas, and was buried in what was once a colored only cemetery.

When real estate developers requested family members to rebury their loved ones, everyone did, except Tatwell's kids.

They didn't budge and the developers had to build a median around it, meaning Tatwell lays in the middle of the street.

People in the area appreciate the history.

"Kinda scared at first I mean its a graveyard its somebody's grave but as you read the plaque its actually a family stance this was their area this is where they were born and raised," Johnny Lee Narvaiz said.