VERIFY: Report claiming one third of families seeking asylum in US aren't related is misleading

The VERIFY team found that a big claim about families seeking asylum in the U.S. leaves out some key details. 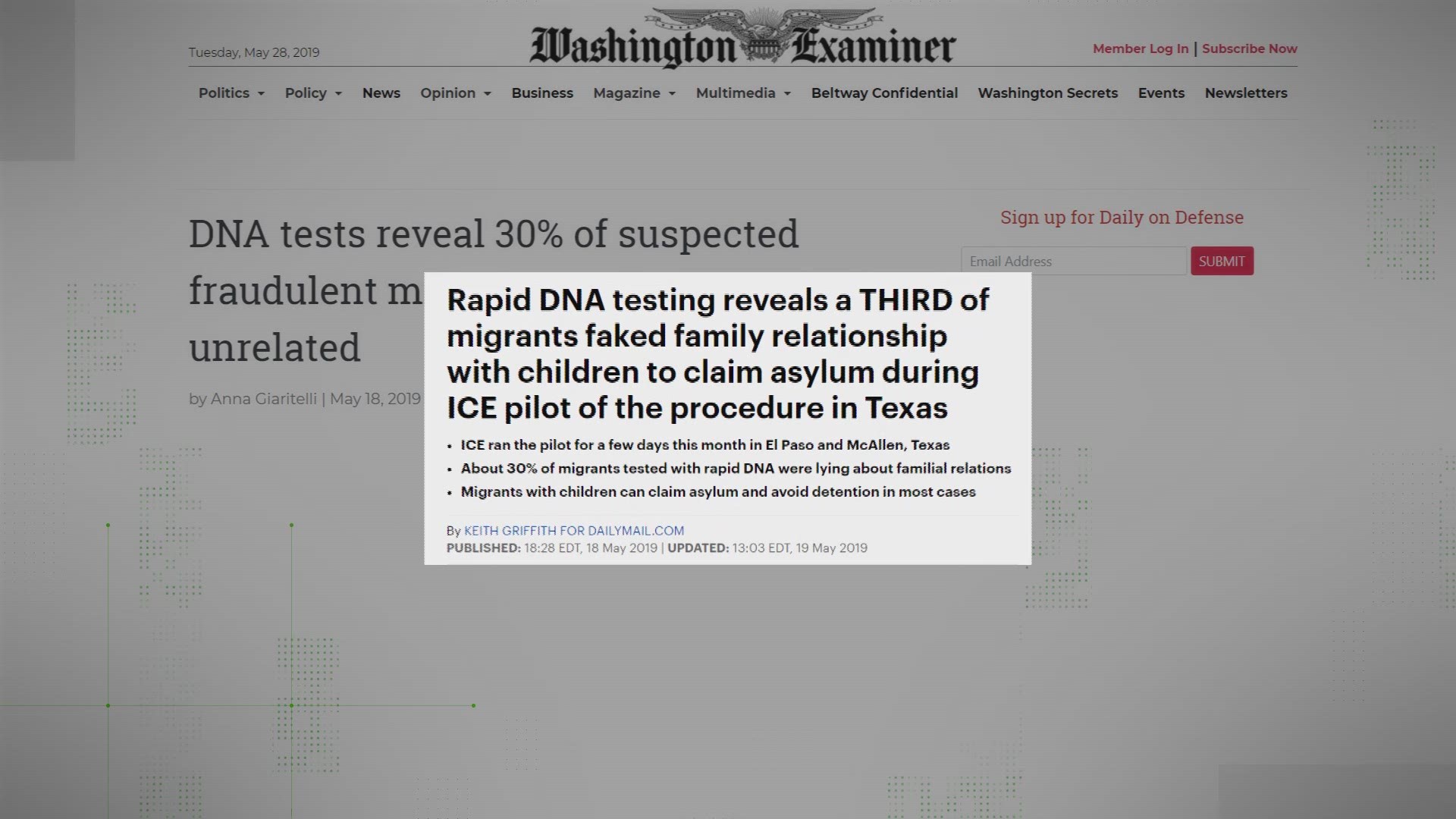 The headline from the Daily Mail was staggering: “Rapid DNA testing reveals a THIRD of migrants faked family relationship with children to claim asylum during ICE pilot of the procedure in Texas.”

One in three migrants? That seems high. Could it be true?

Did DNA testing reveal a third of migrants faked family relationships with children to claim asylum in the U.S.?

The Daily Mail headline is misleading. The pilot program found 30% of the migrants tested weren’t actually related to the children they were with. What's left out is that authorities only tested migrants that they already suspected were with children not their own.

A Washington Examiner story reporting on this same pilot program stated the rapid DNA tests were of adult immigrants who were suspected of arriving at the southern border with children other than their own. It stated about 30% of those tested were found to be unrelated to the children they were with.

An ICE official confirmed to VERIFY that there was a pilot program for DNA testing of migrant adults suspected of fraudulently posing as families. The ICE official also confirmed that the number in the Examiner story -- 30% -- was correct.

The official said fraudulent families are already being identified without DNA testing through law enforcement observations, documented evidence or other intelligence by various teams.

The locations for this pilot have not been released due to operational security, the ICE official said. The pilot is currently being assessed to determine whether it is appropriate to use the technology on a permanent basis.

“No DNA sample, coding, sequencing will be retained. Written notes could exist in an individual case file about whether a test was performed and whether the result indicated a parent/child relationship,” the official said. “Test results are not shared and, in fact, the machine that performs the test destroys the sample. ICE personnel do not handle the DNA samples at any time during the process.”

The Examiner article quoted an official who stated that these were not migrants who were stepfathers or adopted fathers, but instead were cases in which the adults misrepresented themselves as family members.

A Washington Post story reported on plans for this pilot on May 1. The story quoted someone concerned that DNA testing could separate families traveling with adopted children.

DHS officials said they would look for legal documentation in those cases to prove that someone is the child’s legal guardian.

The ICE official stated ICE will refer the case for criminal prosecution in the event of a negative test result. Any children involved in these cases will be put in the custody of Health and Human Services.

So no, a third of all migrants have not been proven by DNA testing to be traveling with children other than their own. It was nearly a third of migrants tested in a group that was already suspected to be fraudulently posing as families.