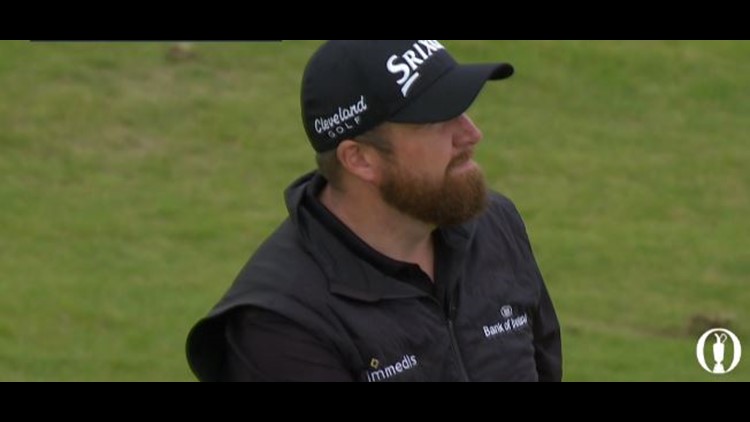 PORTRUSH, Northern Ireland (AP) - The Latest on the British Open (all times local).

Rory McIlroy made a charge that delighted the hometown fans, but it may not have been enough to make the cut in the British Open.

A day after he imploded with a 79 that began with his first tee shot going out of bounds, McIlroy delivered the performance that local fans were expecting. He shot a 6-under 65 to move back to 2 over for the tournament, just outside the projected cutline of 1 over.

There was still a mathematical chance, but it looked bleak for McIlroy, a native of Northern Ireland.

At the end, the crowd filling the giant grandstand around the 18th green rose to cheer their hero, and McIlroy applauded them back.

Tiger Woods and Phil Mickelson have played in the same major 77 times as professionals.

This is the first time both missed the cut.

The 49-year-old Mickelson, who opened with a 76, made double bogey on the par-5 second hole and never quite recovered. He shot 74 on Friday and missed the cut in the British Open for the second time in three years.

The 43-year-old Woods started out with a 78 and his hopes of staying the weekend were done when he failed to make a birdie over the final seven holes in his round of 70.

Woods now has missed the cut in 10 majors as a pro. Mickelson missed for the 14th time as a pro.

They just had never done it at the same one.

Shane Lowry of Ireland goes into the weekend with a share of the lead at the British Open.

Lowry opened with three straight birdies and became the first player to reach double figures under par when he holed a 40-foot birdie putt on the 10th hole as the roar from the gallery pierced the heavy air and rain.

Dylan Frittelli of South Africa also was at 8 under until he couldn't find his tee shot in the high grass right of the 17th fairway and had to go back to the tee to play his third shot. He made double bogey.

Meanwhile, Rory McIlroy was pecking away at his long odds of making the cut. McIlroy was 3 under for the round through 10 holes, but still at least three shots away from making it to the weekend

Darren Clarke made a triple bogey on the final hole to finish the second round at 3-over overall, which may be too high to make the cut and play this weekend.

The 2011 champion, who lives in Portrush and knows the course well, shot an even-par 71 in the first round and was still even heading down the 18th fairway on Friday. But his bogey putt from close range was short and his next attempt went right of the hole. He finally tapped in for a 7.

The cut is projected to be 1 over.

Tiger Woods is headed home early from the British Open.

Woods began the back nine at Royal Portrush with two birdies and had a chance to post a good score at 3 under through 11 holes. But that was his last birdie, and he closed with two straight bogeys for 1-under 70.

He was at 6 over, virtually certain to miss the cut for the second time this year in a major in a season that began with him winning the Masters for the fifth time.

J.B. Holmes is showing no signs of slowing down at the British Open.

Holmes, the first round leader after an opening 66, added a 3-under 68 to take the clubhouse lead at Royal Portrush.

On a day when conditions were favorable for early starters, Holmes was at 8 under, tied with Shane Lowry, who was still on the front nine. Also making a move was Lee Westwood, who was a shot back playing the final hole.

Tiger Woods, meanwhile, still had an outside chance to make the cut. He was 3 under for the day playing the back nine. Rory McIlroy, the local favorite who opened with a 79, had yet to tee off for his second round.

After a first day of rain and blustery conditions, the sky was overcast but the wind was generally light.

England's Tommy Fleetwood has the early clubhouse lead in the second round of the British Open.

Fleetwood made a birdie putt from 15 feet on the final hole to get into the clubhouse at 7-under 135 after rounds of 68-67. He was tied for the overall lead with J.B. Holmes, who was still playing the back nine.

The two were on top of a crowded leaderboard, with 21 players within four shots of the lead even before the afternoon wave of players teed off.

Jordan Spieth and four-time major winner Brooks Koepka were among them. Both were at 5-under-par, two shots off the lead as they played their finishing holes.

It looks like players will have to be near even par if they want to play the weekend, with the early projected cut at 1-over-par.

Tiger Woods will need to make something happen on the back nine to do that. He stood at 6 over after making the turn with a front-nine 35.

Jordan Spieth announced his presence on the British Open leaderboard with a front nine run where he played four holes in a combined 5 under.

Spieth briefly moved into a tie for the lead after going birdie-birdie-eagle-birdie beginning at the fifth hole. He would bogey the ninth to finish the front nine in 4-under 32, making him 5 under for the tournament.

The 2017 Open champion was three shots behind J.B. Holmes, who had another strong start to his day. The first day leader was 3 under for the day through six holes and 8 under for the tournament, two shots ahead of Tyrell Hatton and Tommy Fleetwood.

Tiger Woods birdied his first hole from the rough, and was 1 under through four holes as he tried to make the cut after an opening 78.

Tiger Woods is out on the course, facing an uphill climb to make the cut in the British Open.

The three-time Open champion hit a hybrid off the first tee into the left rough, beginning a round that will determine whether he plays on the weekend.

Woods struggled in his first round Thursday, making only one birdie while shooting a 7-over 78 that left him ahead of only seven other players in the field. When he teed off he was 13 strokes behind leader J.B. Holmes.

Holmes also had an early tee time and was 1-under through three holes.

Second round play began under cloudy skies with predictions of rain showers in the afternoon. The pattern is similar to that in the first round, where players played in a combination of rain, bits of sunshine and wind.

Brooks Koepka is trying to extend an amazing run in the majors that is not limited to winning three out of the last six.

Koepka is never too far from the lead. He was 4 under and tied for the lead late on the back nine of the first round in the British Open before a bogey on the 17th force him to settle for a 68. He was in a tie for third as he prepared for a Friday morning round at Royal Portrush.

That means Koepka has been no worse than third after 13 of his last 16 rounds in the majors.

Woods, Rory McIlroy and others who got off to a rugged start faced a daunting task trying to make the cut on a links course with ever-changing conditions and a steady challenge.

Woods didn't make a birdie until the 15th hole in his opening round of 78, his worst start in a British Open and third-highest score in a major championship. McIlroy played reasonably well except the start (quadruple bogey) and finish (triple bogey) in his round of 79.

J.B. Holmes set the pace with a 5-under 66 and played Friday morning under a mostly blue sky and mild wind. That could change without notice.