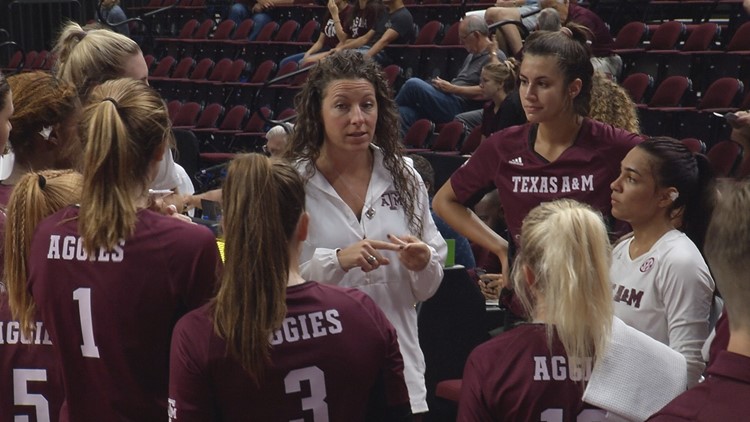 Senior Hollann Hans led the offense for the Aggies with 11 kills to record a .417 mark. Junior setter Camille Conner dished out 36 assists, while Camila Gomez finished with a game-high 18 digs.

Makena Patterson, Mallory Talbert and Lauren Davis each had seven kills and all hit above .300. Patterson had a game-high six blocks, while Talbert, Conner and Treyaunna Rush each had four.

Hanna Brister led Northwestern State (6-4) in kills with 11, and Megan Lohmiller had 10 digs.

There were seven ties and two lead changes in a close opening set. Back-to-back kills by Lauren Davis and a block by Patterson and Conner gave A&M a 4-1 lead. Northwestern State knotted the match at eight with a 5-0 run. The Aggies took advantage of multiple 3-0 runs to take a 20-16 lead. Kills by Conner and Hans closed out the frame, 25-23. Hans led the Aggies with six kills and Lauren Davis finished with four. Gomez had a set-high eight digs.

A&M used a 7-0 run to take a 13-3 and would not let up. The Aggies continued to dominate, holding the Demons to only 12 points. A&M had a .385 hitting percentage, limiting the Demons to a -.133 mark. Patterson had a set-high four kills and Talbert, Sanders and Rush each had two apiece.

A 7-0 run sparked the Aggies to go ahead 12-4. A&M controlled the entire frame and a 22-15 lead after a Hans’ kill. The Aggies clinched the set and the match with a 3-0 run from back-to-back kills by Conner and Sanders. A block by Talbert and Conner secured the 25-17 set win. Hans finished with five kills and Talbert tallied four in the final set.

“That was a solid 3-0 win. Our team came out offensively and set the tone. We needed to clean up some things in the beginning, but getting people in and letting them have their opportunity to show what they could do was what we wanted. We had to work hard in the opening set to set ourselves up to be able to work them in, and with the help of our offense, it was possible. Our defense stopped them and keyed in on things to do just that. There are certain things we need to key in on more. It doesn’t matter who’s on the other side of the net and they started to do that better towards the second and third set.”

“She is coming into her own. She needed to come back to the 12th Man to play in front of them. There was one rally she dug every ball and that shows the type of player she is with the grit and hard work. That is exactly who she is and it is showing what our culture is here and that is what we love about having her in the game. People go nuts to see her get a chance, which is fun and exciting to see.”

The Aggies close out the Texas A&M Invitational against UTRGV. First serve is set for 7:30 p.m. in Reed Arena.