The Aggie offense was led by Logan Sartori and Brett Minnich, who each recorded two hits and a RBI 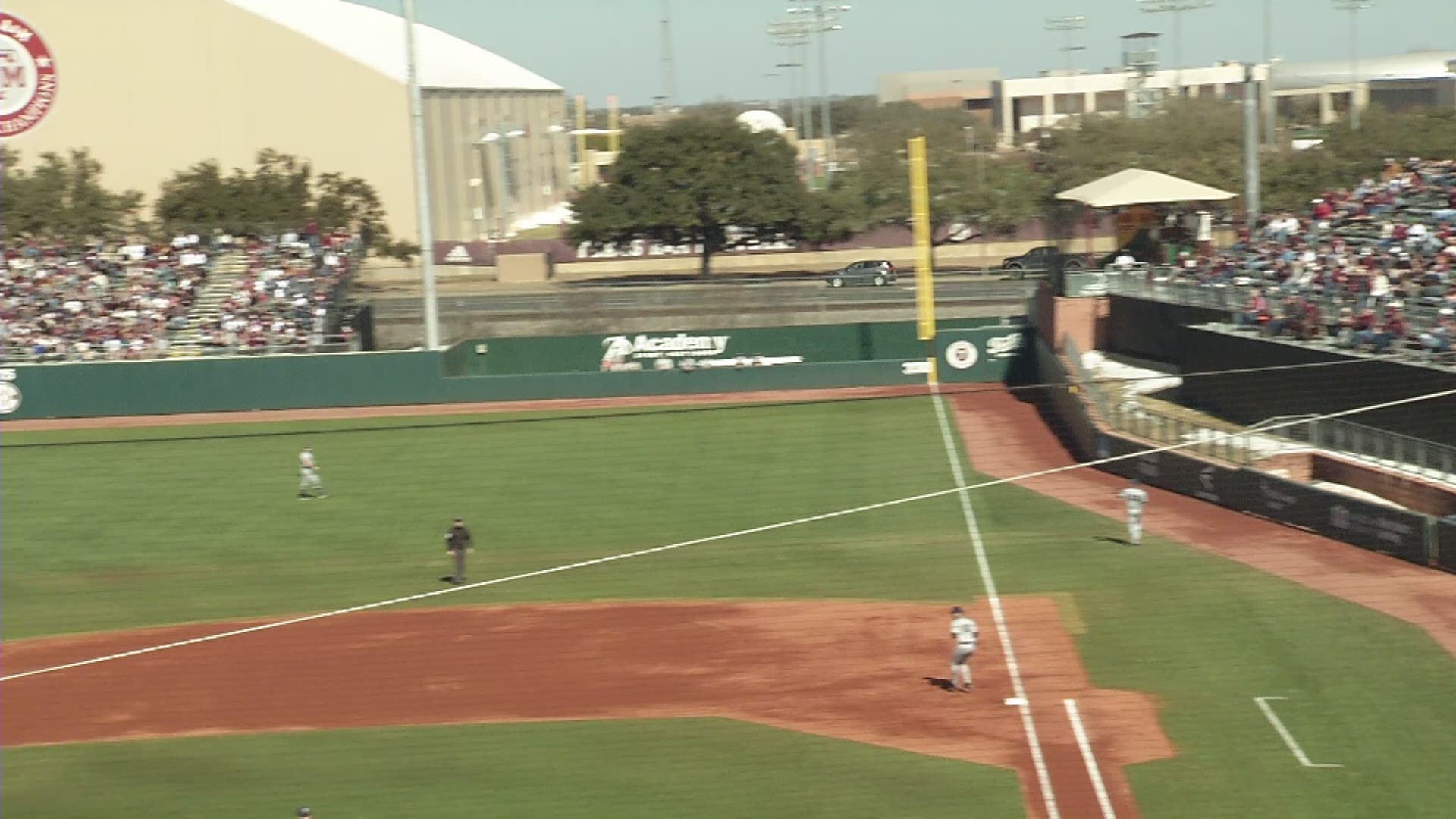 COLLEGE STATION, Texas — The Texas A&M Aggies fell to the Xavier Musketeers in game one of the opening day doubleheader, 10-6, Saturday afternoon on Olsen Field at Blue Bell Park.

The Maroon & White got out to an early lead through the first four innings, scoring three in the first and two in the second. The Musketeers scored one in the second and then went on to score six unanswered runs. The Aggies took a jab at the lead in the bottom of the seventh, cutting the lead to one, but Xavier answered, extending the lead after a three-run eighth.

The Aggie offense was led by Logan Sartori and Brett Minnich, who each recorded two hits and a RBI. Will Frizzell went 1-for-2 with two RBI and two walks. The Aggies failed to get runners in, leaving 12 runners on base and going 3-for-17 with runners in scoring position.

Bryce Miller got the opening day start for the Aggies. He worked through 3.2 innings, yielding four runs on four hits and three walks, while fanning seven. Chandler Jozwiak (0-1) was saddled with loss in relief after giving up three runs on six hits and one walk while striking out one. Alex Magers shutdown the Musketeers offense in the late innings, yielding just two baserunners on two walks while fanning four in 1.1 innings. The combination of Joseph Menefee, Nathan Dettmer, and Wyatt Tucker closed out the remainder of the game.

The staff recorded 16 strikeouts on the day and stranded 10 Musketeers on the base path while holding the Xavier offense to 4-for-15 with runners in scoring position.

SCORING SUMMARY
B1 | Logan Britt got things started, reaching first on a throwing error. Logan Sartori blooped a single to right field advancing Britt to second. Both runners came into score on roped double to rightfield by Will Frizzell and throwing error by the right fielder. With two outs, Brett Minnich doubled off the rightfield wall, plating Frizzell. A&M 3, Xavier 0.

B2 | Mikey Hoehner drew a leadoff walk and advance to third on a lined single to rightfield by Kalae Harrison. Harrison advanced second on a wild pitch, and Sartori loaded the bases after singling to first base. Frizzell advanced everyone a bag, plating one on a sacrifice fly to leftcenter. Harrison capped off scoring after coming in on a wild pitch. A&M 5, Xavier 1.

T3 | Koby Darcy and Garrett Schultz drew a pair of walks to leadoff. With two outs, Natale Monastra loaded the bags after being struck by a pitch. Jonathan Kelly plated two on a single to centerfield and with runners on the corners. Holtz singled up the middle plating one more. A&M 5, Xavier 4.

T5 | The Musketeers loaded the bags on a Monastra single, Kelly single, and Holtz base on balls. Two scored on a single to leftfield by Alex Helmin and Jared Cushing groundball double play. Xavier 6, A&M 5.

T7 | Bryan Sturges pinched hit and reached first on a hit by pitch. Ray Alejo singled to rightfield, and both runners advanced into scoring position on a groundout by Hoehner. Britt drew a walk to load the bags with Ags and Sartori scored one on a base on balls. Xavier 7, A&M 6.

T8 | Schultz drew a leadoff walk and scored on a one-out home run by Franzoni. Kelly walked, stole second, advanced to third on a wild pitch and came in to score on a two-out throwing error. Xavier 10, A&M 6.

The unprecedented hard freeze in the Brazos Valley will force alterations to spectator access at Blue Bell Park for Sunday’s series finale vs. Xavier.

With a priority on fan safety and despite best efforts to clear the area, lingering icy conditions in the upper deck of the stadium will force those areas (sections 201-211) to be closed to fans during both games vs. the Musketeers on Saturday. For fans who hold tickets for these sections, Texas A&M Athletics will make every effort to reseat upper level patrons in bleacher seating and standing room only areas. Unfortunately, due to the unique circumstances surrounding Saturday’s doubleheader and distancing protocols set forth by the Southeastern Conference, fans may be turned away if capacity is reached in available areas of the stadium.