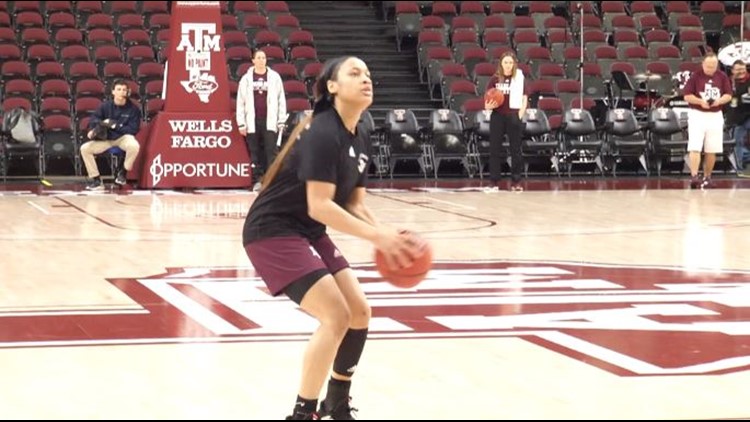 COLLEGE STATION, Texas — The No. 16 Texas A&M Women’s Basketball team begins its week with a home matchup against Vanderbilt on Thursday at 8 p.m. Thursday night women’s basketball will host its annual BTHO Brest Cancer game. Fans wearing pink can purchase $3 tickets in person on the day of the game. Admission is free for breast cancer survivors or those currently undergoing treatment, and they can be part of a special recognition at halftime.

Assistant Coach Bob Starkey will donate $1.50 split between Kay Yow Cancer Fund & Pink Alliance for each A&M student in attendance, and event shirts available for purchase at $10 each, subject to availability (Main, North & South Entrances). The first 1,000 fans in attendance will get a pink BTHO Breast Cancer towel as they enter through the North and South Entrances.

The Maroon and White (18-5, 6-4 SEC) are looking to rebound from a loss last Sunday at the hands of No. 6 Mississippi State. N’Dea Jones led the Aggies, posting 16 points and 15 rebounds. The junior also turned in her 11th straight double-double and 13th overall on the year.

The Commodores (13-10, 3-6 SEC) collected a victory over Ole Miss, 63-47, this past Sunday, snapping a six-game losing streak. Chelsie Hall led the team with 21 points, while hitting 60 percent of her shots.

• Thursday’s game versus Vanderbilt marks the 12th meeting between the Aggies and Commodores, with Texas A&M leading the series 7-4.

• During the Gary Blair era, the Aggies have never lost to the Commodores in College Station.

• The Aggies defeated Vanderbilt, 50-43, in Nashville, Tenn., last season, and then completed the sweep over the Commodores, 69-53, in College Station.

• Head coach Gary Blair sits at 11-10 all-time against the Commodores, and holds a 4-0 record against Vanderbilt head coach Stephanie White.

• Junior forward N’dea Jones recorded her career-best 11th straight double-double with 16 and 15 at Mississippi State ... She is averaging 16.0 points and 12.5 boards in SEC play.

• Jones is the only player in the SEC to record a double-double in every league game this year.

• Jones’ 13 double-doubles on the season rank second in the SEC and are tied for 10th in the nation ... She has upped her career total to 23, which puts her in third on A&M’s all-time list.

• Jones ranks second in the SEC and eighth in the country, averaging 11.1 rebounds per game, while leading the league on the defensive boards (7.6/g).

• Senior guard Shambria Washington is second in the SEC averaging 5.0 assists per game, and is third in the league with a 2.25 assist/turnover ratio.

• Junior guard Aaliyah Wilson stepped up for the Aggies at Mississippi State, scoring 12 points and playing all 40 minutes for the second time in her career.

• Junior forward Ciera Johnson has scored in double figures in 13 of the last 15 games, while boasting the fifth-best shooting percentage in the league (53.4).

• Junior guard Chennedy Carter was named to the Wooden Award Late Season Top 20 this week ... She leads the team averaging 21.9 points per game.

• Head Coach Gary Blair earned his 400th victory as the head coach at Texas A&M when the Aggies defeated Missouri 72-53 at Reed Arena on Jan. 26.

• Junior forward N’dea Jones sits in third all-time at A&M in career double-doubles with 23 to date, and ranks fourth among active SEC players.

• Jones is the only player in the SEC to record a double-double in every league game this season.

• Jones has strung together a career-long double-double streak with 11 straight after putting up 16 points and grabbing 15 rebounds at Mississippi State ... Her 13 total double-doubles this season are good for second in the SEC, 10th in the country.

• Junior forward Ciera Johnson has tallied 18 career double-doubles with six coming this season ... She ranks fifth among active SEC players and is also tied with Danielle Adams (09-11) for sixth on A&M’s all-time list.