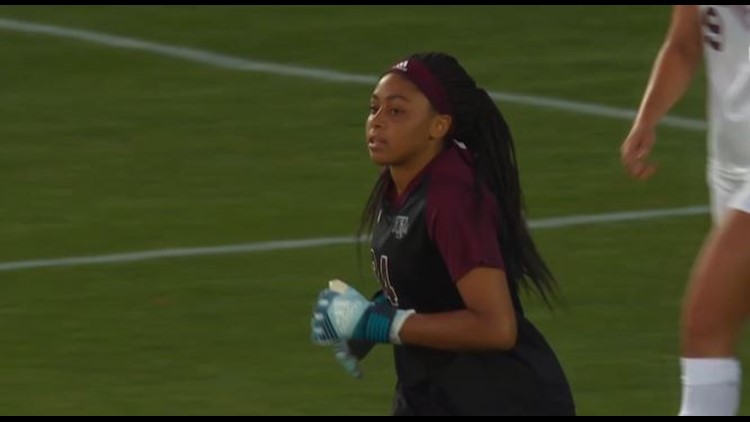 COLLEGE STATION, Texas — The No. 12 Texas A&M Aggies dropped a 2-0 decision to the No. 10 BYU Cougars Thursday evening at South Field.

BYU scored their goals in a span of three minutes to take the 2-0 lead in the 36th minute.

After the Cougars’ two tallies, Shantel Hutton made eight saves, all in the second half to keep the Maroon & White in the match.

BYU outshot Texas A&M 22-4 in the match and held the Aggies without a shot-on-goal. A&M’s best scoring opportunity came in the 52nd minute. Hutton came out of the penalty box to play a long ball to Ally Watt. Watt raced passed the Cougars’ defenders and ripped a shot from 12 yards out, but it went inches wide of the right post.

34’ – Elise Flake received the ball left of the PK spot with her back to goal. Flake spun around and uncorked a shot towards the right post that the A&M goalkeeper appeared to have a bead on, but it deflected off an Aggie defender and slipped inside the left post. BYU 1, A&M 0.

37’ – After the Aggies failed to clear a ball, Flake pounced on the miscue with her second goal in under three minutes.

The Aggies return to action Sunday when they host the UNLV Rebels in a 6 p.m. match at Ellis Field.

“First and foremost, the Cougars are a really good team. They played great tonight. They played us off the park. They were terrific all over the field. As far as our play, I was pleased with the defensive effort of our backs. I thought Karlina (Sample) was awesome keeping us in the game. The same with Breezy (Briana Alston). They both had terrific nights. Our goalkeeper had a great game. Shantel (Hutton) played well back there. There wasn’t much she could do about the first goal, which was essentially an own goal, and the second goal was set up by an inability to clear a ball.”

“You have to give BYU credit. This is a neat environment that they have here. It’s a great home field advantage. We didn’t step up to the challenge tonight. We have to look at this and see what we can learn from what they did to us. I’m happy that we’re returning to Ellis Field for our next match Sunday against UNLV.