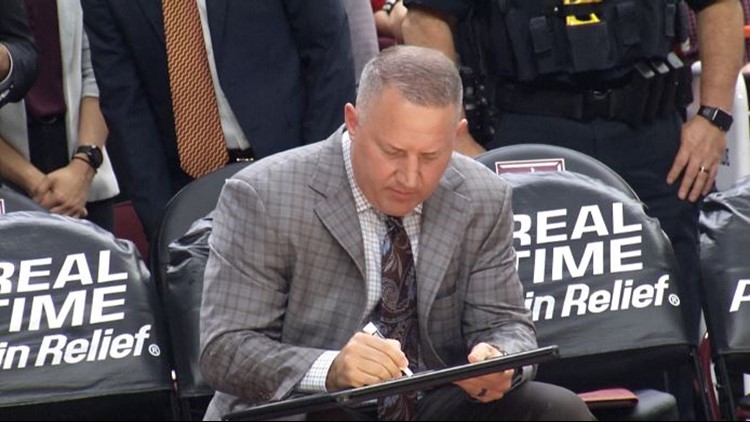 Longhorns Down Aggies on Hardwood in Dallas

·         Emanuel Miller posted two career highs in rebounds (14) and points (8). The Scarborough, Ontario, native grabbed eight rebounds in the first half, tallying the most boards by an A&M player in one half this season.

·         Josh Nebo led the Aggies in scoring with a season-high 16 points on an efficient 7-of-10 shooting from the field and 2-of-3 from the line. Nebo has scored in double figures in five of the seven games he’s played in.

·         The Houston native blocked three shots, moving his career total of 231, which ranks second in the NCAA among active players.

On playing in Dickies Arena for the first time…

On the production from the forwards…

I thought today obviously his (Josh Nebo’s) production was the best he’s been. I thought from that position, it was the most production that we have had. He and (Jonathan) Aku were 9-of-12 from the field. That really helps our team. I thought their ball screen coverage, with as many ball screens as they set, was better than it has been all year long. We just need to count on them to do that and then continue to find more. Eman (Emanuel Miller) had 14 rebounds in 30 minutes. He had 14 of our 30, he had 14 and they had 24 total.”

On playing in low-scoring defensive battles…

“I want to score more points. I don't think me or this team will win a beauty contest. I do know that as long as I'm here I won’t win a beauty contest because they're not going to invite me but we shot 54-percent in the second half. And it was an even game and the second half. And they scored 23 baskets. They scored 23 baskets and 11 were in the charge circle, transition or offensive rebounds. And we held them to 41-percent for the game. But in essence 50-percent of their points came off our turnovers or their second shots. We did a lot better job on second shots. Did a much worse job on turnovers. And so none of that is aesthetically pleasing. We don't get a shot and of our 21 turnovers, 15 were live. So the clock is turning and we give them the ball one way or another. And there goes the ball behind us. Of those 11 baskets, they were off one pass or zero passes. But for the game, they shot 41-percent. But 11 baskets were literally at the rim off our turnovers or offensive rebounds.

On the atmosphere of a rivalry game…

“I think it definitely felt physical, like a hard hitting game, no love loss or friends out there, just a tough physical game. As players you want to play against Texas. The fans want to see that. I feel that it is good for both schools, good for the state and, as you noticed, a good college basketball game.”

On facing the length of Texas defenders:

“Texas has a pretty long and physical and athletic front line, something that we definitely knew going into the game.”

On playing in Dickies Arena…

“I found it as a beautiful arena. One of the best arenas that I’ve played in my whole career. So it was definitely nice to play today and see the Texas A&M fans here.”

On hauling in a career-high 14 rebounds…