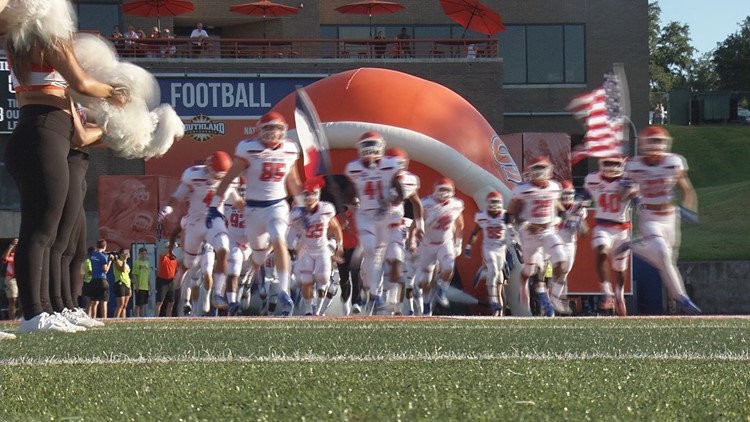 HUNTSVILLE, Texas — Sam Houston State enters 2019 having posted a winning season in each of the past 9 years, not having a sub-.500 season since the 2009 team went 5-6. The streak is the longest in school history, with the next most being 5 years in a row from 1952-56 under Paul Pierce.

- Senior wide receiver Nathan Stewart is 1 of just 4 players in FCS history to reach 1,000 yards receiving as a freshman, sophomore and junior. Should he reach 1,000 receiving yards again in 2019 he would join Terrell Hudgins (Elon) and Cooper Kupp (Eastern Washington) as the only players in FCS history to do so in 4 straight years. Through 2 games in 2019 he has 97 yards receiving on 8 catches.

- The Kats finished with 539 yards of total offense in its loss to New Mexico. It is the first time the Kats have dropped a game when totaling at least 500 yards of offense since falling to Texas Tech in 2015 despite racking up 637 yards that day.

- K.C. Keeler would win his 228th career game. He is currently 15th all-time among FCS head coaches, 7 wins ahead of former Wofford coach Mike Ayers and former SHSU coach Ron Randleman. He is 2 wins behind former Ohio State and Youngstown State head coach Jim Tressell for 14th all-time among coaches who spent at least 10 years at FCS schools. Keeler’s 227 victories are the second most among active coaches in the FCS behind only Al Bagnoli of Columbia.

- Keeler would win his 54th game as head coach of the Bearkats and would be 4 wins behind former Lamar head coach Vernon Glass for seventh all-time among Southland Conference coaches. It would also move him into sole possession of third place in coaching wins all-time at SHSU, breaking a tie with former SHSU head coach J.W. Jones.

LEFTOVERS FROM A 77-0 WIN OVER OKLAHOMA PANHANDLE STATE

- The Bearkats set a school record for points in a quarter when they scored 42 points in the opening quarter vs the Aggies. The Kats had 21 points on the board just 2:01 into the game after a pair of defensive touchdowns and a rushing score from Eric Schmid.

- In all, the 77 points scored was tied for the fourth most in the history of the SHSU program and was the most points scored since putting up 77 points against Bacone in 2005. The 77-point margin of victory was the most since 78-0 wins against East Texas State in 1927 and Blinn College in 1916.

- In all the Kats scored 11 touchdowns with 8 different players crossing the goal line. Of those 8 scores, 5 were rushing, 2 were defensive and one was passing. The 8 rushing touchdowns were the most since also having 8 in a 76-0 win over HBU in 2014.

- Donovan Williams (117) and Toneil Carter (106) each put together their first 100-yard rushing games against the Aggies. It marked the first time since Ridgeway Frank (137) and Remus Bulmer (111) each went over the 100-yard rushing mark in a win over Southern Utah in 2015.

- Nathan Stewart hauled in 2 catches for 26 yards in limited action against OPSU. He now needs 10 more catches to become the fourth Bearkat in program history and the ninth player in Southland Conference history with 200 career catches.

- The Bearkat defense was relentless throughout the game, racking up 15.0 tackles for a loss and 7.0 sacks with 5 takeaways.

- The defense also managed to score twice, both within the first 3 minutes of the game and on back-to-back plays from scrimmage, on a fumble recovery by Will Lockett and a pick-six by Zyon McCollum. It was the first time since the Kats had a pair of pick-sixes vs HBU in 2013 that the defense had scored 2 TDs in a single game.

- Nate Ketteringham connected with Noah Wanzek for an 8-yard touchdown with 4:44 to play as North Dakota squeaked out a 24-23 win last season at Bowers Stadium in the first-ever meeting between the teams.

- The loss snapped a 21-game win streak for the Bearkats at Bowers Stadium. It was the longest active win streak in all of FCS at the time, and the second longest in school history.

- Sam Houston did not turn the ball over in the game, but allowed 5 sacks by the UND defense. The game marked only the sixth time in 158 games since 2005 that the Bearkats had allowed 5 or more sacks in a single game.

AT HOME AWAY FROM DOME
Sam Houston will be playing indoors when it heads north to take on the Fighting Hawks, which is not out of the ordinary since the Kats have been annually playing at least one game indoors each year since 2010 in the Battle of the Piney Woods vs Stephen F. Austin; however, games played indoors against teams not named SFA have not been as kind.

In one of the oldest rivalries in all of college football, the Battle of the Piney Woods has raged on for nearly a decade at NRG Stadium, the home of the Houston Texans. In a joint effort between SHSU, Stephen F. Austin and Lone Star Sports & Entertainment, the game was moved to Houston beginning in 2010. The Lumberjacks took that game, but since then the Bearkats have taken each of the last 8 meetings. Entering its 10th year at NRG Stadium, the Kats’ 8-game win streak is the longest in the history of the series by either team and has run SHSU’s record to 55-35-2 vs SFA over the course of the rivalry.

BACK IN THE RANKINGS

When the national polls were unveiled prior to the start of the season, the Kats were where they have become accustomed in recent years, as a ranked team. They finished 2018 as an unranked team, despite going 6-5, but after entering the season ranked No. 23 in the STATS FCS poll and No. 22 in the NCAA Coaches poll, they enter this week at North Dakota still in the national rankings. It is the eighth straight season SHSU has begun a season ranked in the STATS FCS poll, last opening a year unranked in 2011.