The No. 17 Sam Houston State Bearkats exploded for 47 unanswered points on their way to a 54-21, win over Stephen F. Austin on Saturday at NRG Stadium in the 93rd edition of the Battle of the Piney Woods. 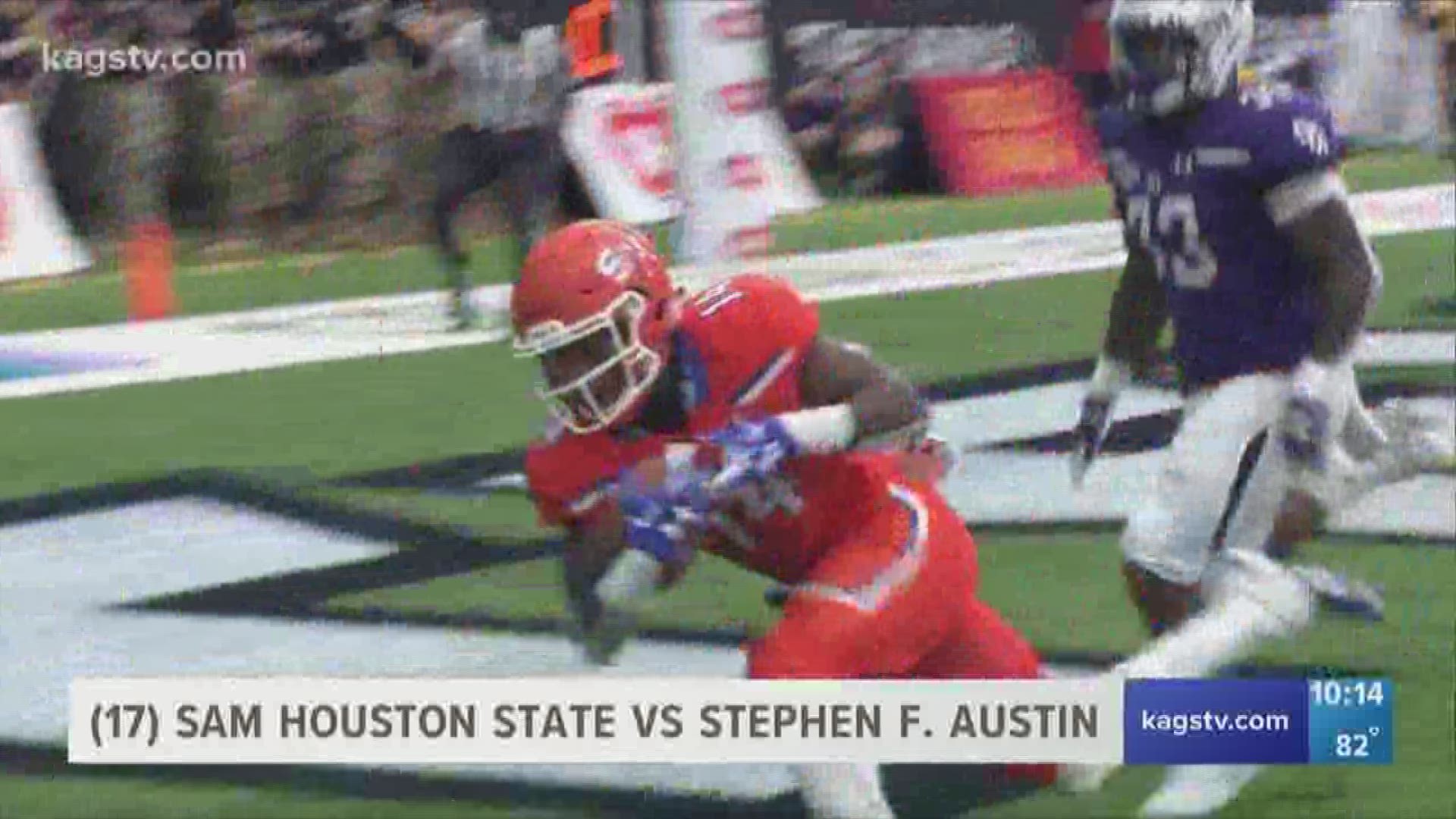 HOUSTON – The No. 17 Sam Houston State Bearkats exploded for 47 unanswered points on their way to a 54-21, win over Stephen F. Austin on Saturday at NRG Stadium in the 93rd edition of the Battle of the Piney Woods.

The win gave the Kats (3-2, 2-1 SLC) their eighth straight win in the series over the Lumberjacks, extending the longest run by either team in the history of the series.

Quarterback Ty Brock accounted for four touchdowns in the first half and the Kats, including a 32-yard reception on a pass from Eric Schmid early in the second quarter that broke the game open. In all, Sam Houston ran up 500 yards of total offense while holding SFA (1-4, 1-3 SLC) to under 300 yards for the second consecutive year.

The three Bearkat quarterbacks combined to hit 11 different receivers for total completions and four touchdowns with Nathan Stewart leading the way with 87 yards on four catches and his first touchdown reception of the year. Davion Davishad a score and 69 yards on five grabs, while McCray hauled in one from Dare for the Kats’ final touchdown of the day.

Defensively, Derick Roberson led the way with three sacks and 3.5 tackles for loss as part of a day that saw the Kats finish a season-high six sacks and 12.0 tackles for loss. DJ Curtis picked off SFA quarterback Foster Sawyer a pair of times, including a pick-six in the second quarter that gave Sam Houston the lead for good.

It was a high-scoring first half with both teams getting in on the action early, but it was the Lumberjacks who were able to take advantage of an early Bearkat miscue after Quin Jones intercepted Brock on the second snap from scrimmage of the game at the Bearkat 35-yard line. Foster Sawyer then connected with Tamrick Pace from nine yards out to put the ‘Jacks up 7-0 less than four minutes into the game.

Two drives later the Kats took advantage of a short field of their own to tie things up at 7-7. A good punt return from Davion Davis and an SFA penalty set Sam Houston up at the Lumberjack 20 and three players later Brock found Davis in the left corner of the end zone for the score.

Sawyer immediately led SFA back down the field connecting on five of six passes for 55 yards on a 10-play drive that covered 75 yards and finished on a 5-yard run by Josh McGowan into the end zone.

But from there, it was all Bearkats as Sam Houston exploded for 37 unanswered points to end the half. The first points of that run came when Brock connected on big plays to both Davis and Dee Bowens before running one into the end zone from eight yards out to knot it up at 14-14.

It took one more snap from scrimmage for the Kats to take their first lead of the game when Curtis picked off Sawyer on the opening play of the ensuing drive and raced 30 yards untouched into the end zone for the Kats’ first pick-six since 2015.

Two drives later Sam Houston got creative two drives later when Schmid took a throwback pass on the left side and hooked up with Brock on the other side of the field for a walk-in, 32-yard touchdown that pushed the lead to 28-14.

Curtis then set the Kats up once again on the next drive, picking a deflected ball out of the air for his second interception of the half and setting the Kats up at the 22-yard line. Two plays later Kyran Jackson went in from four yards out for his first score of the game, giving the Kats a 35-14 lead with less than 10 minutes to play in the half.

Stewart got in on the action when Brock found him for a score from 43 yards out, his first touchdown of the year and Tre Honshtein closed out the half as he nailed a 27-yard field goal as time expired to give Sam Houston a 44-14 lead midway through the game.

After Roberson’s second sack of the day put an end to SFA’s first drive of the second half, the Bearkats quickly added to their lead as they went 56 yards on nine plays on a drive that ended in a 23-yard field goal from Honshtein.

Roberson’s big day continued one drive later when he sacked SFA quarterback Jake Blumrick, forcing a fumble that was recovered by Scean Mustin at the SFA 42-yard line. Mike Dare then marched the Bearkat offense right down the field, eventually hitting McCray out of the backfield for a 17-yard touchdown that upped the lead to 54-14. The score would stay that way until late in the fourth quarter when Blumrick found Pace from 21 yards out for a touchdown.

Sam Houston will now hit the road for its second away game of the year, next Saturday at Northwestern State. The game is set for a 6:00 p.m. kickoff at Turpin Stadium and will be aired on ESPN3 and Cox Sports TV.

- The 30-yard interception return for a touchdown by DJ Curtis was the first pick-six for the Bearkats since Darion Flowershad a 90-yard pick-six against McNeese in 2015.

- His second interception of the game came just two drives later and made him the first Bearkat to have multiple interceptions in the same game since Mikell Everett had a pair against Central Arkansas in 2015.

- The 44 points scored by the Bearkats in the opening half is the most points ever scored by Sam Houston in a half in the 93-year history of the Battle of the Piney Woods.

- Derick Roberson played in three Battle of the Piney Woods’ games in his career and capped it with another big performance, racking up five tackles with three sacks, 3.5 tackles for loss and a forced fumble. For his three-game career against the ‘Jacks, Roberson finished with 15 tackles, 5.5 sacks and two forced fumbles.