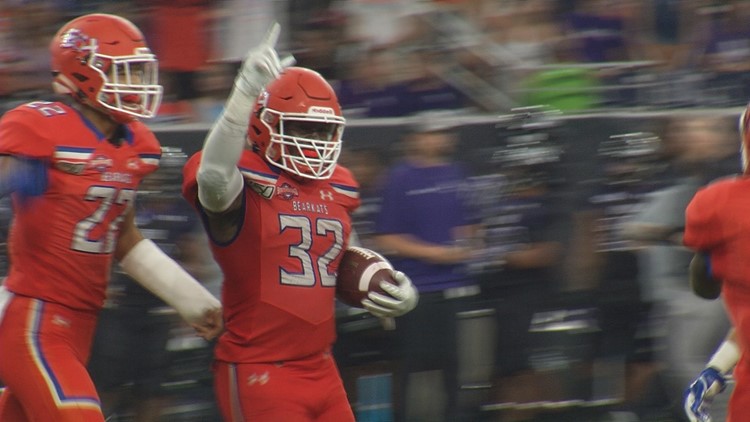 On a day that the Sam Houston State Bearkats needed every break they could, get senior Royce See turned in a career performance to help the Kats win its ninth consecutive Battle of the Piney Woods rivalry game over Stephen F. Austin at NRG Stadium in Houston.

A senior who had been a part of three Piney Woods victories in his career, See had a hand in four of the Kats’ six takeaways in the game, including two in the fourth quarter to help seal the game. The six turnovers for SHSU was the most by the team since they had six in the 2013 Piney Woods rivalry game, and the defense also had 15.0 tackles for loss in the contest.

See, meanwhile, finished with a team-high nine tackles and a TFL, along with two interceptions, a fumble recovery and a forced fumble. The picks were his first since he had two as a sophomore in 2017, and marked the second straight year a Bearkat had two picks in the Piney Woods game.

He had already forced a fumble and picked off a pass entering the fourth quarter, but pounced on a loose ball after a sack from Joseph Wallace to set up the Kats’ final TD and then one possession later picked off SFA quarterback Trae Self for the second time to seal the game.

The big defensive day helped the Bearkats’ defense surge to the top of the FCS in takeaway, now with 18 for the year. The unit also ranks ninth in the FCS in rushing defense, 12th in scoring defense and 20th in total defense.

See and the rest of the Kats will put their 3-0 Southland Conference record on the line at home on Saturday when they host Lamar on ESPN+.