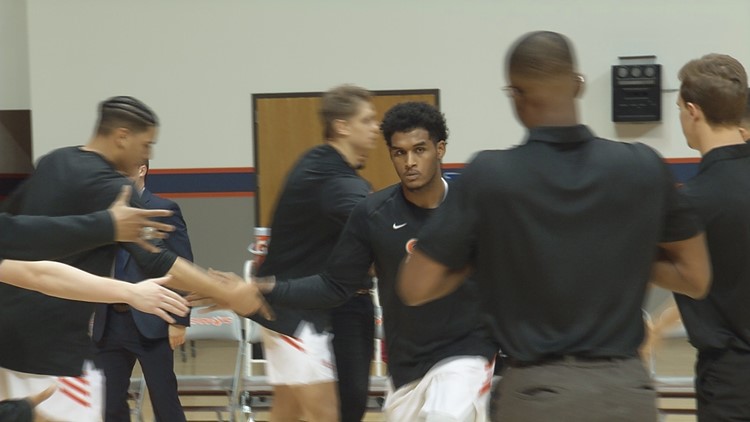 HUNTSVILLE, Texas — The Bearkats came out firing to snap a three-game losing streak with a 79-70 victory over Southeastern Louisiana at the University Center Wednesday evening.

Sam Houston State shot a blistering 53.7 percent of its field-goal attempts to improve to 9-5 in Southland Conference action and 16-9 overall. The Kats also went 8 for 16 from 3-point range to top the Lions (6-19, 3-11) for the second time this season.

The Lions got as close as two in the second half, but the Bearkats stepped on the gas and opened up the game with an 18-6 run to take a 61-47 lead with 11 minutes left in the contest. Smith hit a 3 and Mitchell threw down a dunk to spark the run.

Southeastern Louisiana would not go away and answered with a 23-12 run to cut it to 73-70 with less than two minutes to go in the game.

Bowie scored on a layup and Mitchell and Jones each hit a pair of free throws down the stretch to seal the victory.

The Bearkats led by as many as 12 in the first half when junior Bubba Furlong hit a jumper to make it 33-21 with just under five minutes to go before the break.

The Bearkats shot a scorching 57 percent from the field in the opening period and 44.4 from behind the arc. They held Southeastern Louisiana to just 39 percent shooting, but the Lions were 12 for 17 from the free-throw line.


The Sam Houston State Bearkat women's basketball team scored seven straight points in the final minutes to break a 71-71 tie and pull out a 81-75 win over Southeastern Louisiana on Wednesday night at Bernard G. Johnson Coliseum.

Four straight free throws from Jenniffer Oramas and Jaylonn Walker snapped the tie, but it was a stepback 3-point shot by Walker with just 49 seconds left on the clock that delivered the final dagger of the night.

It put an exclamation mark on a big night by the senior guard as she finished with a game-high 26 points and six rebounds, hitting 7-for-10 from the foul line and 3-for-4 from long range. Walker hit each of her first six shots from the field and had 17 points thru the first three quarters, finishing 8-for-11 from the field.

Amber Leggett also found her stride, adding six rebounds and six steals to a 21-point night that saw her also make a pair of shots from long range. Jenniffer Oramas hit eight of her nine tries from the foul line on her way to a dozen points, and Faith Cook added 10 points and seven assists.

In all, the Kats were efficient offensively, hitting half of their 52 field-goal tries and 23-for-28 from the charity stripe.

Celica Sterling led the Lady Lions with 24 points, while Charliee Dugas added 14 as the only other SLU player in double figures.

Sam Houston looked as though they were going to run away with things early on, jumping out to a 16-4 lead to start the game; however, SLU trimmed that lead to just five points by the end of the quarter and then opened up the second quarter with a 9-2 run to take its first lead of the game.

The Lady Lions would hold that lead to the half, holding the Kats to 10 points on 4-for-16 shooting in the second quarter for a 34-31 lead at the break.

Walker and Leggett then put the Kats on their backs in the third quarter, scoring 18 of the team's 21 points of the period to cut in the SLU lead, keeping Sam Houston within striking distance for its fourth-quarter push.