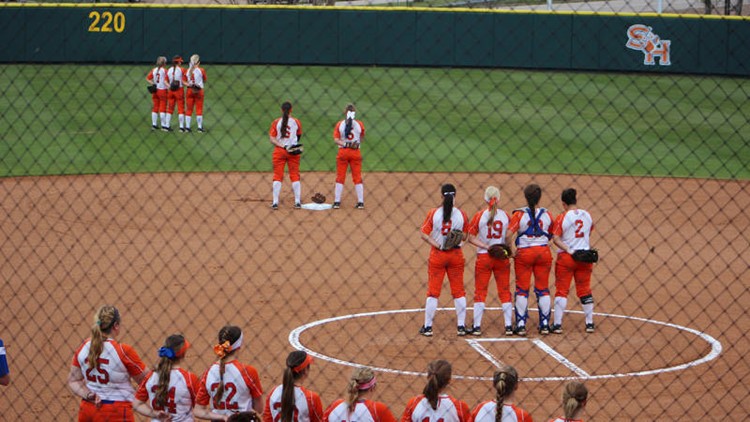 The Bearkats (4-3) defeated George Mason for the third time this season in the opener. The two teams played twice at the Stetson Leadoff Class a week ago.

SHSU closed day-one action with a a 9-1 victory over Providence.

The Bearkats host Loyola-Chicago at 2:30 p.m. Saturday and Providence at 7.

The Bearkats jumped out to a 4-0 lead in the first inning of their home opener to cruise to a 10-2 victory over George Mason (0-7) in five innings.

Senior Tiffany Thompson doubled down the left-field line with one out. Junior Brooke Malia then reached on a fielder's choice and junior Bailey White walked to load the bases.

The first run came across when junior Madilyn Weatherly also reached safely on a fielder's choice as Thompson beat the throw home to make it 1-0. Junior Sheridan Fisher drew a walk to score another run and an error and a ground out made it 4-0.

SHSU added two more runs in the second on an error and wild pitch, before ending it with a four-run fifth inning. Weatherly singled to get it started, then sophomore Regan Dunn brought in a run with a single following an error.

Senior Megan McDonald and Maila both hit RBI singles to put the run-rule into effect.

Junior Brooklyn Devine got the win in the circle, making her first start. She gave up two runs in four innings before she was relieved by junior Annie Bailey, who pitched a scoreless fifth inning.

In the nightcap, the Bearkats once again got rolling with two runs in the bottom of the first.

The first came on a throwing error by the catcher who was trying to throw out sophomore Regan Dunn on a successful steal at second that scored senior Tiffany Thompson. Junior Madilyn Weatherly also had an RBI single.

Senior Hunter Ervin, who also had an RBI single in the fifth, made it 3-0 in the second with a towering solo home run over the wall in left field.

That was plenty of run support for Dunn in the circle. She struck out a career-high 11 batters in five innings to improve to 2-2 on the season.