Texas A&M point guard Jordan Nixon's inner circle was hit hard by the COVID-19 pandemic but it wouldn't stop her from getting back on the court. 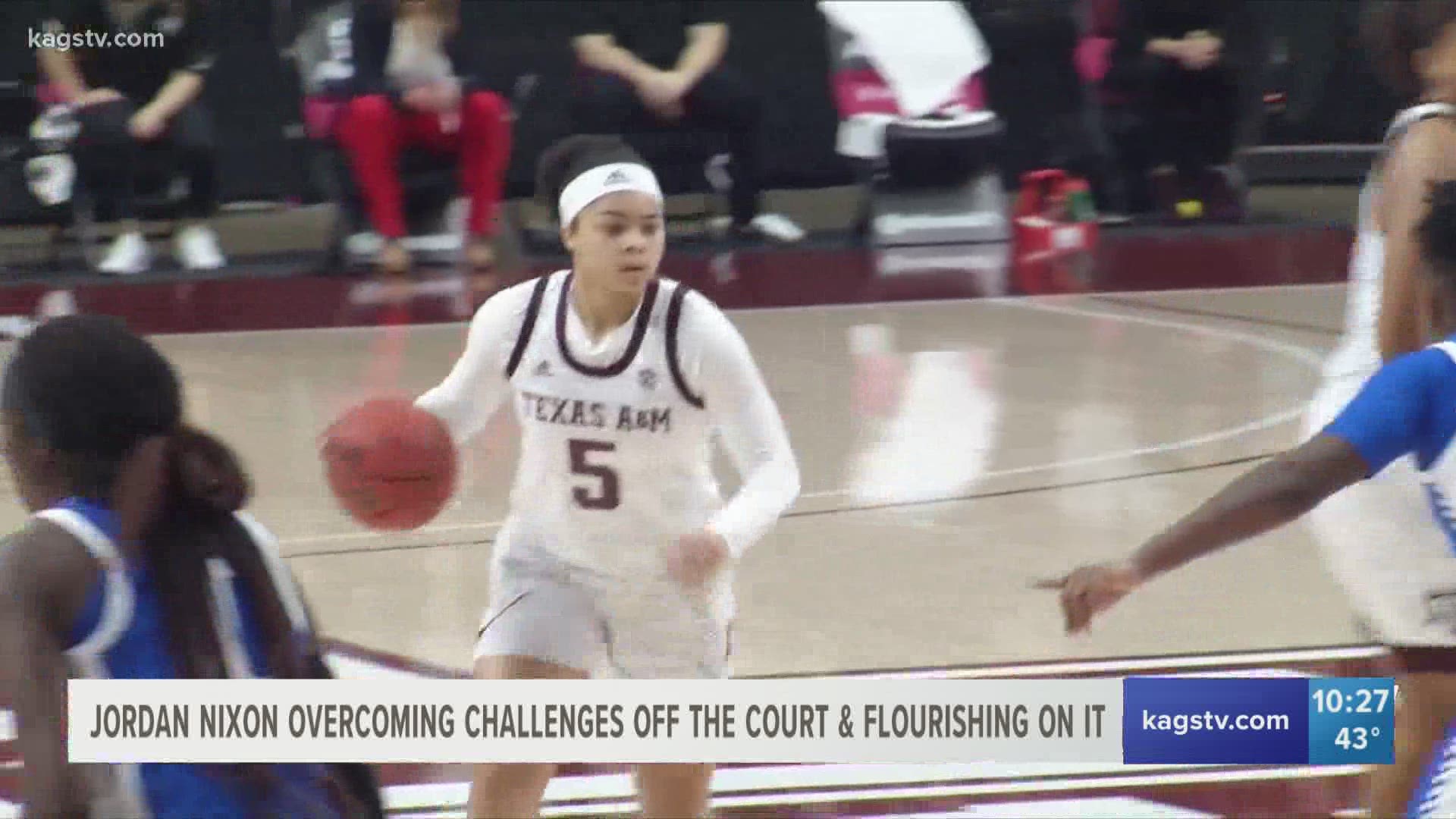 COLLEGE STATION, Texas — The Texas A&M women's basketball team trailed Arkansas by one point with less than 10 seconds to play on January 10.

Head coach Gary Blair drew up a play to get the ball to senior guard Aaliyah Wilson, who already had a career high 30 points.

It was redshirt sophomore point guard Jordan Nixon's job to get her the ball.

Arkansas denied Wilson on the wing, so Nixon took the play into her own hands. The former McDonalds All-American drove right and put up a floater with less than three seconds to play. The ball bounced off the backboard, went through the net and touched the court with less than half a second to go. The Aggies would get a stop and win the game.

The play wasn't designed for Nixon, but life doesn't always go as planned.

After transferring from Notre Dame after her freshman season, Nixon had to sit out the 2019-2020 year. The summer heading into the 2020-2021 season was supposed to be spent getting ready for her first game action in front of the 12th Man, but the COVID-19 pandemic changed everything.

"I just remember being outside and my mom called me and said Coach Dave passed away," Nixon told KAGS.

"That's two people in my corner who have now died because of COVID," she said. "Mr. Lewinger, even more than Coach Dave. I was like 'Are you serious? What do you mean, how is this happening?'"

The tough breaks weren't over either. Later in the summer, Nixon lost her uncle Bobby to a heart attack. The basketball star had to put the game she loved on hold.

"Once that happened, I told my mom I had to come home," Nixon said. "Not that I didn't care about COVID, but I told her I'd wear my mask, do whatever but I had to go home."

Nixon flew home to New York City to spend the next few months in the epicenter of the pandemic, patiently waiting for the right time to return to campus.

The starting point guard spot was still up for grabs, and Nixon wouldn't be denied.

"She did it not just with skill, but with a voice," Texas A&M head coach Gary Blair says. "She can handle responsibility and accountability."

The basketball court is Nixon's safe space. It's therapeutic. It's something she cherishes now more than ever.

"I feel like when I'm on the court, I'm able bodied," Nixon says. "I'm able to do certain things, spend time with my teammates, do things on my own. It finally feels like I have an opportunity I don't want to miss out on."

With Nixon leading the charge, the Aggies are now one of the top teams in America.

No surprise the New York City kid who has gone through so much is leading A&M through these turbulent times.

"We just didn't find a hidden gem under a rock; she's always been out in front," coach Blair says. "We're just trying to polish it, accentuate her skills and let her be herself. A very strong-willed kid with a lot to say and I love coaching those kinds of kids."

Just like the last second shot against Arkansas, Nixon is making the best out of the hand she's dealt.