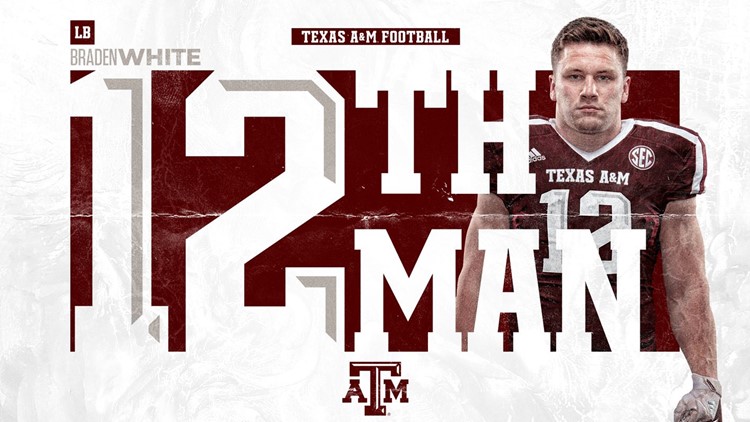 White, a junior from Florence, Alabama, appeared in 18 games over the past two years playing primarily on special teams and earned the Top Conditioned Athlete Award following the 2018 season. After redshirting in the 2016 season, White was named Defensive Scout MVP at the annual team banquet.

White recently graduated in August, earning his degree from the College of Business.

White replaces Cullen Gillaspia who donned the 12th Man jersey for the last 39 games, Gillaspia is tied with Sam Moeller for the all-time record for appearances as the 12th Man.

The 12th Man refers to the entire student body at Texas A&M, past and present. The tradition originates in 1922 after several injuries against Centre College, the nation's top-ranked football team, the Aggies were down to just 11 players. E. King Gill came from the stands, suited up and stood ready to go on the field if needed. The spirit of this 12th Man continues, as current students stand during the entire game to support the team.

Texas A&M opens 2019 against Texas State on August 29 at Kyle Field, a Thursday night contest set to be broadcast on SEC Network.