Dalton Meyer and Ryan Humphries started Walk-On radio during quarantine, and the Bearkats haven't lost since it's debut 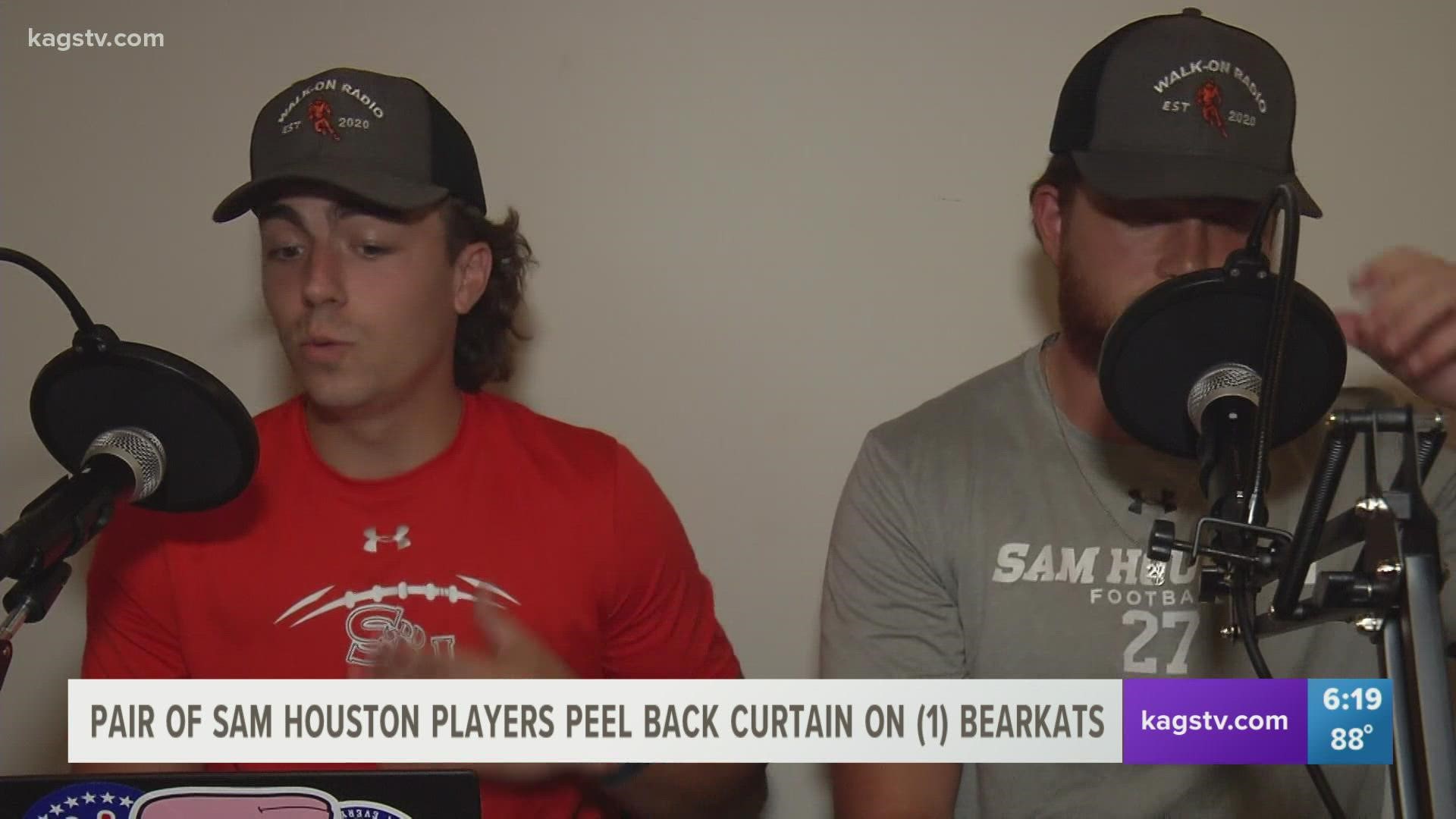 HUNTSVILLE, Texas — Covid-19 changed the way media covered sports from the professional level down to the high school level.

Interviews were conducted via zoom, fewer cameras were allowed on the sidelines and the face-to-face interactions that were once so common became obsolete.

During Sam Houston's historic run to the FCS Spring National Championship, the team's beat reporters were forced to cover the games from the top of the stadium. However, two podcasters found their way into the locker room.

Walk-On Radio was launched during quarantine out of boredom. Dalton Meyer, a Sam Houston film major, took a radio class and thought starting a podcast would be fun. He approached his former dormmate, Ryan Humphries, about joining the show, and he quickly agreed. The two were always talking about football anyway, and the podcast was geared to shine a light on the FCS.

"We wanted to show people the playoffs are fun, FCS football is fun and it’s really something you can get into," Meyer said.

The show got its name because the two hosts started their Bearkat careers as walk-ons on the football team. Meyer is a tight end and Humphries is a wide receiver. Humphries is also the team's holder and won the Frederick Award which is given annually to the top holder in the country.

💥College Football has some MAJOR matchups this weekend💥 https://t.co/0d6EBUbIIe

Keeler has been a Division I football coach for nearly 30 years and this is the first time he's ever had his players share the stories from inside the locker room with the rest of the world.

"For us to be so hands-on with the program, that backstage look at it was entertaining to listen to," Humphries said.

"I just look forward to them talking about what happened in the football world that it caught us off guard, the stuff the rest of the world is talking about," senior tight end Isaac Schley said, "but these are our guys, I want to hear their opinion."

Humphries said if he had a dime for every time a teammate asked to come on the pod, he'd be rich. The pair may not be rich yet, but Walk-On Radio has signed a deal with Bleav, a professional podcast network based in Los Angeles.

That's the media equivalent of a walk-on earning a scholarship, which both Meyer and Humphries did on the field as well.

Being podcasters wasn't in their plans as freshmen, but these two rarely stick to the script.

"I know me and Hump have talked about as adults, going to different FCS games and tailgating, traveling and doing the whole experience," Meyer said, "we have a lot more steps to take with Walk-on Radio but I’m excited to see where this goes in the future."

Coming to a TV near you soon: pic.twitter.com/VEkMFYaEgh

The rest of the Bearkat team has fully embraced the podcast as well. In the past, Sam Houston players were only allowed to wear team-issued gear on the road but now coach Keeler has added Walk-On Radio apparel to the list of approved items.

#1 Sam Houston is back in action this Saturday when the Bearkats welcome Lamar to Bowers Stadium. Kick-off is set for 2 p.m.